Next to Last Stand: A Longmire Mystery 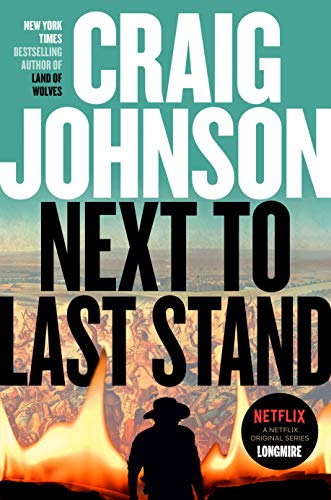 For devoted series fiction readers, the release of a new volume by a favored author is cause for the Happy Dance all the way to the nearest bookstore, library, or e-tailer.

Double bonus if the new book is the best yet of a series that keeps getting better.

Next to Last Stand, number 16 in the Longmire series, fulfills expectations. It’s a little different from its predecessors, though. Sheriff Walt Longmire of Absaroka County, Wyoming, has taken quite a beating during his previous cases, including several near-death experiences. Although a big, tough guy—football in his youth, a Marine during Vietnam, an oil rig worker, finally becoming a lawman—he’s now nearing retirement age. It would be pushing credulity to have him survive another round of hammerings and remain vigorous enough to support a popular contemporary crime series that shows no signs of stopping.

The author is savvy enough to understand this, so here he gives Longmire a break. This volume’s mystery involves a famous, long-lost painting of Custer’s Last Stand and has Longmire rubbing elbows with a slicker crowd than usual. One of them starts killing people, for reasons Longmire suspects relate to the missing painting, but he must use his brains and personality to identify and catch the culprit(s).

Longmire’s brains are impressive and might, to new readers, seem out of character for an aging sheriff in rural Wyoming. However, his smarts, capacious memory, and deep knowledge of literature and history are established early in the series and continuously developed, so that by this adventure, where he puts them all together, they are fully believable and, indeed, the pivot point on which the plot turns.

Of course he doesn’t do everything alone. Regular series characters—his best friend since age 12, Henry Standing Bear, a Cheyenne bar owner; and Longmire’s undersheriff (and part-time lover), the feisty Victoria Moretti—accompany him on the investigation around Wyoming and into Montana, and back him up when the going gets tough. His other colleagues, friends, and family make mostly cameo appearances this time, to keep readers planted in Longmire’s world.

The case starts at a veterans’ home with the death of Charley Lee Stillwater. Upon going through his effects to find contact information for any relative, the home manager discovers a million dollars cash in a shoebox, plus a curious study for a painting, so she calls in Longmire to investigate.

This quickly leads to the famous painting Custer’s Last Fight, long believed to have been destroyed in a fire. In revisiting the fate of this painting, and how it connects to an obscure Black veteran previously believed to be impoverished, Longmire and company tell readers a lot about the history of not just the artwork but also George Custer and the Battle of the Little Bighorn.

In one of the many snappy dialogues between Longmire and Henry, they relate to Vic the story of the battle from both the white man’s and the Natives’ viewpoints. This echoes recent public debate pertaining to historical revisionism and adds insight to the issue through fiction, moderated by humor.

There’s room in this volume for more humor than average in the series because of the reduced action. That doesn’t mean the story lacks excitement or danger. There are plenty of both, punctuating the high interest value of the Western art and history, and intriguing characters who are introduced for this episode. As well, readers get to know the familiar cast much better.

That last point is what earns a series devoted readership. Longmire et al. are so realistically conveyed, and such good folks, that people care about them and remain engaged in their lives, relationships, and dramas. Add a solid evocation of place and culture, plus masterful prose, and you get the reason why this series has been a reliable bestseller and generated its own TV mini-series.

As soon as fans gobble up this volume, they’ll resume waiting eagerly for the next chance to Happy Dance!