The Next Decade: Where We've Been . . . and Where We're Going 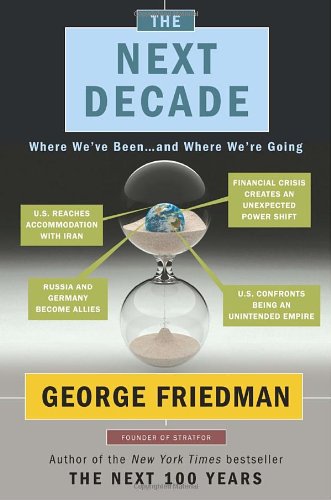 Author George Friedman takes a very personal look at the next ten years in his new book, The Next Decade. He is clear and blunt in what he sees as the United States becoming an empire at the expense of the republic.

He bases the book on two themes: The first is his concept of an unintended empire. The second theme is about managing this empire and getting back to becoming a republic. He finds that fact that the republic is suffering because the U.S. has lost sight of its original mission, that of fighting off the British imperialism.
To fully comprehend Mr. Friedman, defining his terms of “republic” and “empire” are critical to the bases of the book.

The founders conceived our government as a republic, a self-contained state in which the power rests in the citizenry in which we are entitled to vote and are represented, directly or indirectly, by extension. These are the roots of our government.

Mr. Friedman’s use of the word, empire, is a stretch from the original usage. He describes the U.S. as a new “empire” in that by being a superpower and by virtue of our military supremacy, economic power, global influence and world status, we have evolved from a self-contained republic to a global dominant force over the world. Our influence is present and felt in foreign countries.

He lays the blame for this unintended empire problem squarely at the feet of our federal government who took our country into wars overseas, many impossible to win. The United States set itself up to create short-term chaos that is a tactic, not a strategy. Our leaders destined us to failure.

Mr. Friedman spends the next twelve chapters defending this view with exhausting research about why the United States must fight against being an empire and maintain its status as a republic.

The solution to whether the country survives as a republic or succumbs to being an empire lies squarely on the shoulders of the president, according to Mr. Friedman. Although the president is one person, the president has the power to move the empire and/or the republic.

This power according to Friedman comes from a Machiavellian source he subscribes to three former presidents who embodied this kind of greatness as profoundly moral men: Abraham Lincoln, Franklin Roosevelt, and Ronald Reagan. Using Machiavellian expediency is above morality and the use of deceit to maintain their authority and carry out their policies.

Friedman says each of these presidents was prepared to “lie, violate the law and betray principle in order to achieve their ends.” Each were a complexity of duplicity and righteousness in order to redeem the country and maintain the republic, although Reagan undermined the Soviet Union and set the country on a course to becoming an empire.

The Next Decade decodes the political territories region by region. Relationships between the countries of Northeast Asia, Indonesian Sea-Lanes and India’s Terrain are but a few examples of the depth of the analysis and investigation that went into this book. No corner was left unexamined.

For all of the U.S. involvements throughout the world, the country still maintains 25 percent of the world’s economy, which is a problem. How the country found itself in a dilemma of entanglements goes back to Spanish-American War of 1898. Attempting to withdraw from our investments and borrowing would set the world on a course of disaster and Mr. Friedman says for the U.S. to change its policies is “simply not an option. Calling for it is a fantasy.”

As an immature people, we expect solutions that are not possible. This next decade is crucial in that we must transition from a narcissistic foreign policy to a more reasonable and “nuanced exercise of power,” Mr. Friedman wrote.

We did not manage our country well in this past decade and we now have the opportunity to get it right. The good news is that our mistakes, so far, have not threatened or survival. However, he points out in chapter after chapter, the threat of the mismanaged diplomacy could be our undoing. If we are to go to war, the U.S. must do a better job of choosing its better and make sure they can be beaten. We cannot afford to fight wars out of rage.

What this country needs is a Machiavellian president who embodies power as well as a moral core. This person must be clever enough to construct coalitions that can get us through the storm of a nation divided. To survive, Mr. Friedman calls for the nation to “grow-up,” come together and pay attention to what is important.
He does this job very well. The book is clear, crisp, and well organized.

This book is a must read for anyone who wants to gain an understanding on a global scale what the U.S. is facing in the near future.