The Next Civil War: Dispatches from the American Future 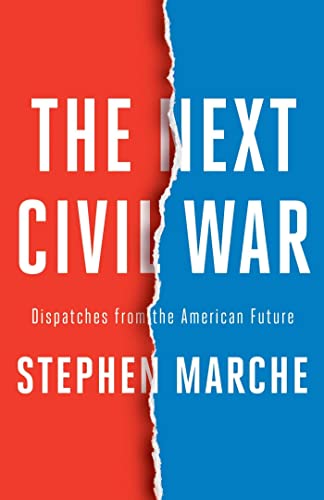 “The question a critical reader must ask while carefully considering this thought-provoking book is whether the US is on the verge of a civil war.”

Stephen Marche begins his sober reflection on the state of the nation with these chilling words: “The United States is coming to an end. The question is how. Every government, every business, every person alive will be affected by the answer.” And then warns: “The United States is descending into the kind of sectarian conflict usually found in poor countries with histories of violence, not the world’s most enduring democracy and largest economy.”

Marche is one of a growing number of social critics warning of the mounting right wing threat facing the nation. His work joins Barbara F. Walter’s How the Civil Wars Starts: And How to Stop Them (Crown) as well as numerous articles and media considerations of the issue. Marche is explicit in his intention: “This book is a warning.” And he adds, “Today’s crisis requires prediction because so many people do not want to see what is unfolding in front of their eyes.” As a cautionary note, he adds, “At the same time, the future is inherently unpredictable."

The Next Civil War is a well-written work, drawing on extensive research and rigorous analysis to tell a coherent—if frightening—story. Marche has an argument to make, and he uses a wide range of sources and an innovative storytelling technique to make it. He draws on the expertise of noted former military officials, academics, and political figures, scholarly studies, opinion polls, and a host of other sources.

To tell his story, Marche invokes a series of “dispatches” to lay out a series of “what if” scenarios. They include made-up characters as signifying representatives and include “the Sheriff,” “the General,” “the Assassin,” and “the Producer.” They embody how the actions of a local police chief, a federal military commander, a political killer, and a public-radio producer could play out in futuristic scenarios of a coming civil war.

Marche offers two broad scenarios that could lead to a possible new civil war—one political, the other environmental. His vision of an environmental crisis precipitating a civil war is grounded in a catastrophe of unimaginable devastations, one involving a massive pandemic, ever-worsening income equality, widespread crop failures, droughts, and growing hunger. The crisis could precipitate wide-scale violence and a civil uprising.

For Marche, the attack of January 6th and the actions—both before and after—by former President Donald Trump are not the critical issues. “Trump is, at most, a symptom,” he declares. He is especially interested in those he identifies as an “anti-government patriot.” “I believe the phrase captures the basic connection between a wildly diverse collection of groups. They hate the government but they love the country. . . . They believe that the federal authority is destroying the true America.”

Marche has a very broad definition of the extreme right wing. “The hard right in America today ranges from men and women a few steps over from small-government conservatives to outright criminals and the insane,” he argues. Going further, he argues: “Rather than following one coherent ideology, or series of ideologies, the hard right offers a buffet of sensibilities. Each individual picks and chooses: white power, Christian identity, the inviolability of the Second Amendment, tax loathing, the belief in the illegitimacy of the federal government.”

Marche offers an extensive discussion of the deepening political and social split dividing the nation—e.g., liberal vs conservative, Democrat vs Republican—over a host of issues, but his greatest concern is how the right has militarized.

“The hard right has strategically infiltrated law enforcement in the United States to such an extent that no police department or federal agency can be relied upon in a struggle against white supremacy,” he observes.

This militarization also includes civilians owning of guns and military-grade weapons, including hand grenades and drones. Marche notes that there are more guns in circulation in the country than there are people. “So the hard right in the United States is in possession of any and all weaponry between the pistol and low-level nuclear bombs,” he warns.

At the heart of Marche’s critique is a simple perception: “America is becoming two Americas, Americas that hate each other, that don’t speak to each other.” This schism seems less to do with growing economic inequality than racial and nationalistic beliefs. It is often referred as “the Great Replacement,” the “fear” expressed by some white Americans, especially men, that they are being “replaced” by women, African Americans, Jews, and the growing number—and diversity—of immigrants who’ve settled in the US over the last quarter century.

Marche’s warning anchors his study: “The United States will soon enter a period of radical instability as a country, no matter who is in power and no matter what policies they enact. The economic future will be more volatile. The environmental future will be more unpredictable. The cities will be more vulnerable. The government will be incapable of policy and disconnected from the people’s sense of their collective will.”

The question a critical reader must asking while carefully considering this thought-provoking book is whether the US is on the verge of a civil war.

The country has faced moments of true historical crisis, two involving actual civil wars: the Revolution and the Civil War. But it’s also witnessed period of deep socio-political strife that Marche doesn’t consider or dismisses as relatively inconsequential, including the Know-Nothing movement of the 1850s, the Red Scare of the 1910s, the labor struggles of the 1930s, the McCarthy Red Scare of the 1950s, and the tumultuous ’60s.

Next year, let alone In a quarter century, will we look back at today’s crises—both political and environmental—as just blips in social development? This question takes on greater significance in the wake of the January 6th attack on the Capitol and the unfolding political struggle now underway. Marche’s The New Civil War is an essential tool to assesses what might play out.