The New Yorkers: 31 Remarkable People, 400 Years, and the Untold Biography of the World's Greatest City 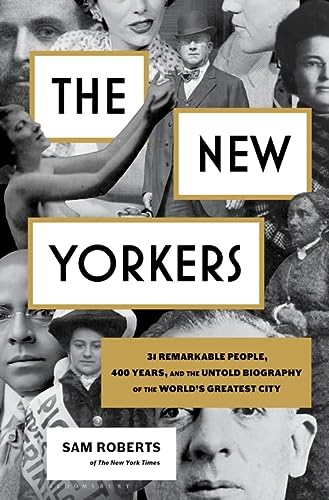 “Roberts tells an epic tale through these 31 stories, the evolution of a great city developed by people who wrote history with their lives.”

In his prologue to The New Yorkers: 31 Remarkable People, 400 Years, and the Untold Biography of the World’s Greatest City, author Sam Roberts asks Neil G. Bennett, head of the City University of New York’s Institute for Demographic Research, how many individuals could be considered bona fide New Yorkers over the course of the city’s lifespan.

Bennett uses the year 1790 as starting point. It was the year of the first census. Other factors Bennet considers include immigration, birthrates, estimated numbers of immigrants and transient residents, and the city’s expansion into five boroughs. The final total: just shy of one billion, give or take a few citizens.

Boiling that massive number down to just 31 representatives is a daunting task. How can an author reveal the mortal essence of a city in just one score and eleven? It’s a daunting challenge, but one the author is equipped to handle.

Roberts formerly served as The New York Times’ urban affairs correspondent and is now the obituaries reporter. He is also an adviser to Federal Hall, a centuries-old New York institution devoted to cataloging the city’s history in all its multifaceted forms. Add to this Roberts’s previous books, A History of New York in 27 Buildings and A History of New York in 101 Objects. Between his resume and bibliography, Roberts knows New York on an almost cellular level.

The 31 profiles herein cover a wide swarth of humanity. Some of these men and women are well-known figures; others are memorialized in paintings or statues, though their importance has fallen into the cracks of history. Yet, whether or not we recognize the names, we know their impact.

Take, for example, Levi Weeks, a man whom contemporary theater audiences know well even if they don’t realize it. Anyone who’s seen the musical Hamilton or listened to the Broadway cast album knows of his fame. In the song “Non-stop,” Hamilton declares “Are you aware that we’re making history? This is the first murder trial of our brand-new nation.” To which Burr adds “Our client Levi Weeks is innocent.”

Yes, Hamilton and Burr really were defense attorneys in the case of The People v Levi Weeks, the first American murder trial with a formal written record. Weeks was accused of killing his romantic partner, the vivacious Elma Sands. When Sands went missing without a trace, Weeks was considered a prime suspect in her disappearance. After a massive ten-day search, Sands’s lifeless body was found at the bottom of a well. Did she fall, commit suicide, was she pushed, or perhaps killed before being dumped in a dank hiding place?

The subsequent trial and everything leading up to it became a media circus, a template for future such spectacles. Papers breathlessly emphasized the victim’s beauty and innocence, while maintaining that Weeks was nothing less than “a brute.” In the eyes of press-enflamed public passion Weeks was a guilty man who deserved the harshest of punishments. Hamilton and Burr, despite their intense political rivalry, united for a virtuoso defense. Seventy-five witnesses were called to the stand, backing up the solid alibi of the defendant. It took the jury less than five minutes to pronounce Weeks “not guilty.”

Still, the public hounded for blood. For his own safety, Weeks fled New York, ending up in the Mississippi territories. He settled in the growing city of Natchez, where he became a prominent architect. His crowning achievement was The Briars, a private residence that became a model of building design for the burgeoning world of southern plantations. The Briars hosted the marriage of prominent local politician and future President of the Confederacy, Jefferson Davis.

This early entry is a good example of how Roberts structures each biography. He introduces his main character, develops the setting and supporting players, then drills down into the minutiae of the story. The format works well, giving the big picture of who New Yorkers are, a genuine kaleidoscope of humanity.

Roberts includes comparisons and contrasts of New Yorkers throughout the centuries. Consider Jacob Hays appointed in 1802 as the city’s high constable, a position comparable to a modern police chief. There was a hard fact about Hays that made him a questionable candidate for the job: He was Jewish in an era when the small number of Jewish New Yorkers, living on the fringes of a largely Christian society, were subject to blatant anti-Semitism, both open and backhanded. As one writer complimentary of Hays described the high constable as: “He had a round, stolid face, of the hue of mahogany—a genuine Jewish physiognomy.”

Despite the naysayers who decried him over religion, Hays excelled at the job, which he held for nearly five decades. His reputation as a strict law-and-order man caused one newspaper to opine that Hays’ eventual death would be a day for great celebration by miscreants throughout New York.

Contrast Hays’s story with that of Jack Maple, a 1970s-era transit cop working within the dark bowels of the city. Maple looked like a character out of Guys and Dolls, always dressed in his signature bowler, bowtie, and wingtip shoes augmented by a pair of spats. He pioneered the use of cops working as decoys in subway cars and train stations, often putting himself on the front line in the battle against muggers.

Maple was of strong mind that crime could be plotted out like numbers on a graph. He put into place a system similar to Jacob Hays’ method of studying crime, which Hays detailed in notebooks. The modern version became known as CompStat, a policing strategy that mapped out patterns of crime based on area, coupled with type and time of offense. The procedure was spot-on. Crime in the subway system went down, and Maple’s reputation soared. He rose through the ranks, becoming a top figure in the NYPD.

Maple later became a CompStat consultant to police departments across the country. He also wrote a few episodes of The District, a television series loosely based on his exploits. Maple’s life was cut short by colon cancer, but he lives on in both established police practices, as well as a quirky character in the HBO drama series The Deuce.

Roberts excels at telling the stories of the “little people” who made a big difference. Anna Moore, described by The New York Times in January of 1892 as “a rosy-cheeked Irish girl” was the first person to be checked through what soon became the center of American immigration: Ellis Island.

Philip Payton Jr., the grandson of slaves, would be known today as a community organizer. His Afro-American Realty company channeled institutional discrimination and ghettoizing of Black New Yorkers into a positive force. Through Payton’s visionary leadership, the Harlem neighborhood became a vibrant community for African Americans, leading to the Harlem Renaissance of the 1920s, one of the most important artistic movements in American cultural history.

Audrey Munson is another cultural force of nature. She was the nation’s first supermodel, high in demand for her beautiful countenance and figure. Munson posed for sculptors throughout the United States. Her form can be seen at museums, public artworks, and private collections around the world, in marble, bronze, bas-reliefs, and more. Regal statues of Munson stand high atop both the State Capitol Building in Madison, Wisconsin, and the Manhattan Municipal Building in her hometown.

Munson also achieved a certain notoriety for her film work in early days of cinema, not for acting talents but for her celebration of the feminine physique. In 1915 she became the first actor in American movie history to appear nude in a mainstream production in a film titled Inspiration. Censors were reluctant to pull the photoplay from circulation, fearing this would open the door to banning other artworks depicting the naked human body. Munson later was at the center of a notorious love scandal, a common theme throughout the book. New Yorkers are a romantic lot, willing to risk all for passionate embraces.

Roberts tells an epic tale through these 31 stories, the evolution of a great city developed by people who wrote history with their lives. Consider The New Yorkers not as a collection of biographies, but rather representatives of a city that former New York Mayor David Dinkins described as “a gorgeous mosaic . . . of race and religious faith, of national origin and sexual orientation—of individuals whose families arrived yesterday and generations ago . . .”