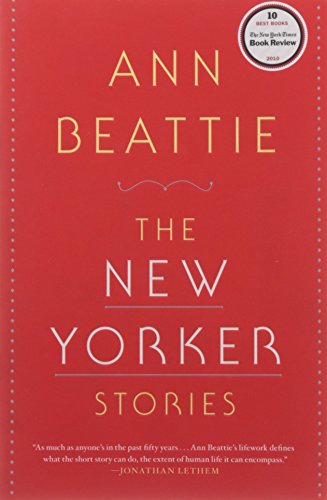 There is a pang that occurs quite naturally when you hear that a friend or family member is about to watch a really great movie for the very first time. Especially if this movie is an old friend of yours, a Preston Sturges or Billy Wilder film perhaps—one that you’ve seen and loved so many times that you cannot remember a time before you saw it, or recreate the emotions that you had on watching it for the first time. You can only envy the fact that the other person is about to have a profoundly enjoyable experience.

Such is the case with books as well, especially books like Ann Beattie’s The New Yorker Stories. Here is a tome of the old school, published on good heavy paper, in hardback—a book with the scent of books on it.

And in it is something more than a collection of short stories culled from the pages of the particular magazine that gave the book its title. In The New Yorker Stories is both a retrospective of what now (unbelievably) is a more-than-three-decade career of one of our finest and most talented writers of short fiction, and a time capsule loaded with shards of memory of a pre-Great Recession, pre-9/11, and post Vietnam America.

In other words, The Good Old Days.

Everything seems wonderfully old fashioned about this book. The book itself, the wonderful hardbackness of it, as well as the fact that it collects short stories—for which we have seemingly lost our taste as a culture. And let’s not forget to mention what awaits the suppliers as well as the original publisher of these stories, that greatest of dinosaurs just waiting for the comet to come and wipe them all away: the print magazine.

As such, The New Yorker Stories is something to be cherished and appreciated: a book to be bought as a book and not a download, to be cradled in the hands late at night and read, not by the light of the screen or via magic ink, but, instead, by the reading light next to the bed, with the heavy paper pages turning with the sounds that only those pages can make. A book that tips and sways by its own weight as the stories lull the reader to sleep in an adult version of “tell me a story.”

As to the stories themselves, well, the reader must confess up front a particular love for Ann Beattie—a lurve for her, for those who have seen Annie Hall—as she represents for so many of us of a certain age the “voice of our generation,” no matter how much Joyce Maynard may yearn to wear that crown. We are all growing old together, Ann Beattie, you, and I, and The New York Stories stands testament to the fact that, no matter how old we get—individually and generationally—we grow no wiser. Not if these stories are a mirror to our minds and faces.

The timeline of The New York Stories runs from 1974, when Beattie first burst on the scene with her shuffling tales of lovers, losers, and potheads, to 2006, by which time her characters, who drove VW vans early on, are now behind the wheels of Lexuses.

The geography of the stories is familiar as well. The world of Ann Beattie is a small one: Vermont, Virginia, and the small towns of Fairfield County, Connecticut. Places she knows more by county lanes than by highways. Places she’s lived and reveals to us in the rooms of old farmhouses, and on their porches, patios and lawns. People drive in to New York City or Washington in order to go to work in Beattie’s stories. But we don’t go with them. We wait, instead, in Greenwich, Easton, or Chevy Chase.

The New Yorker Stories is something of a greatest hits album for Beattie; all the stories contained within have been published before, read before by those of us who have been growing old with her since Chilly Scenes of Winter. Thus, they are old friends and reading them is not so much a revelation of the tremendous gifts that their author possesses as it is a reminder of the journey that we have made together from there to here.

Not that there are not surprises to be had. Some stories, like “Vermont,” that were remembered as golden seem gold-plated instead on rereading. While others, like “The Cinderella Waltz,” seem more powerful, more insightful with age. And still others are missing altogether, proving that even The New Yorker isn’t all-knowing when it comes to its selection of fiction.

A perfect story like “Jacklighting,” for instance, which was published in Beattie’s 1982 collection The Burning House, and which apparently never made the cut for The New Yorker, makes for a glaring omission here—as well as a reason for those who find pleasure in these stories to dig deeper and read the rest. And Beattie’s got plenty more to offer.

For those uninitiated, The New Yorker Stories presents the perfect introduction to one of our culture’s finest and most idiosyncratic writers. Ann Beattie has never seemed, to this reader at least, to be one of those writers who are (think: Annie Proulx) fully and masterfully in control of her gifts. Instead, she seems more to be possessed by it. Her stories are, like her novels, all of a moment, rushing in a barrage of words, usually told in present tense, as if a dodge ball game were going on in your head as you read them.

Some have discernable plots, others don’t. All incorporate Beattie’s central themes: that marriages never seem to work out, but friendships do; that marijuana is at once neither and both a help and a hindrance; and that, no matter our age, death is the reality that waits around the corner. (On reading these stories again in the compressed state of a single volume, the reader was surprised to discover the number of dead bodies in Beattie’s stories. The number seems to be more than those that pile up in a production of Hamlet.)

Most important, all the stories published here contain what may be called “Beattie details.” Bits of nuance that reveal all: the reasons, unknown and unknowable to the narrator herself, why she so loves a particular pottery bowl in what may be this reader’s favorite story collected here, “Janus,” which is worth the cost of the book all by itself. Or the detail of grieving parents sleeping, one on the couch and one on the floor just below, each covered against the winter chill by wearing the other’s overcoat as a blanket in “In the White Night.” Or, best of all, from the story “Greenwich Time,” the image of a man letting himself into his ex-wife’s house through the back door: “He puts the key she gave him into the lock and opens the door as gently as if he were disassembling a bomb.”

These are the things that separate Beattie from the rest: her eye for detail, her turn of phrase, her revelation of the moment. It is a pleasure to see her work so celebrated here. And those who are having the chance to discover her for the first time with the publication of The New Yorker Stories are to be envied for the experience they are about to have.