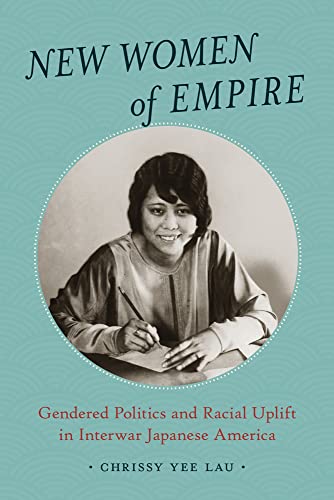 “New Women of Empire is never less than a fascinating read, and many of these chapter case studies could well be expanded for fuller publication.”

Chrissey Yee Lau’s ambitious study presents, through a series of five case studies—of both New Women and New Men—the ways in which cultural, political, and economic forces emanating from Japanese as well as American “imperialisms” impacted the gender presentation of young Japanese Americans, bent on assimilating and succeeding in American society as well as retaining and respecting the values of their parents’ generation.

It would have been interesting at some point to have had Lau’s reflection on Betty Friedan’s feminist classic, The Feminine Mystique (1963) which showed how after the Second World War the roles of American women were reconstructed by larger political, socio-economic, and cultural forces, to discourage or prevent their participation in the outside world, and to overvalue the work of housekeeping and homemaking.

Lau’s analysis is based upon the stories of five young women and men in Los Angeles between the two world wars, Los Angeles being a critical site of transnational relations.

The book’s cover features a marcel-waved Susie Yamamoto, who is the subject of the first, and perhaps most coherent and complete case -study, which shows how Yamamoto—hog farmer, garbage collector, business woman, local politician—negotiated changing ideas of appropriate female gender roles both in  domestic and in public life. The photo comes from a profile written about her in the San Bernadino Daily Sun of 1927. According to Lau, Yamamoto “gender code-switched” according to changing political and legal expectations as a result of the changing status of Japanese Americans in America “though ultimately, her gender code-switching or her adoption of multiple gender-roles, could not protect her from an era that disenfranchised both married women and non-white peoples.”

Elsewhere Lau mentions the conflict that could be experienced by Japanese American women who wanted to disregard and disprove the typically “orientalizing” gaze of American society toward Japanese women, and at the same time to embrace the social and sexual freedoms inherent in being “a flapper.” This theme could have been elaborated with profit. Despite her hairstyle there’s little evidence provided of Yamamoto’s “flapper” tendencies. She seems to have been much too busy.

The second case study focuses on a man, Masao Dodo, and shows how anti-immigration legislation, embodied in the Immigration Act of 1924, closed the possibility of land ownership and citizenship and forced Japanese Americans, particularly men, to seek validation, self-respect, and belonging through other avenues, notably through muscular Christianity (probably Lau should capitalize “muscular” throughout as she is referring to a bona fide movement, rather than merely providing a description, or reflecting an opinion!), which had a heavy emphasis on male intellectualism and athleticism, much of which was pursued through the Japanese Young Men’s Association (JYMA). A strong emphasis throughout—at least as interpreted by Dodo—was a rejection of modernism (“flappers and boobies”), and a return to strict morals, patriarchal values, “Japanese Imperial masculinity,” and the projection of Japanese diasporic citizenry as a “model minority.”

Although always fascinating these case studies are often a dense and difficult read. This is due to a number of factors. First the approach chosen by Lau of presenting and analyzing the impact of larger political, legal, economic, and cultural forces of Japanese and American imperialisms or “inter-imperialisms,” over many years, through the lenses of individual biographies will inevitably lead to some very condensed explanations.

This approach is most readable where she has the most complete data on the individual concerned, but where that is not the case, chapters have been stitched together from her extensive research into the archives of the Survey of Race Relations, from censuses, and particularly from myriad newspaper articles. This approach often results in incoherent passages and some baffling syntax.

Secondly, Lau also assumes a good deal of knowledge, and community of understanding of her key frameworks and concepts—Japanese Imperialism, American Imperialism, racial uplift, muscular Christianity, model minority, New Woman, New Man, and so forth; and while most of these are introduced in the first chapter, a lot of further deduction will be required along the way by most readers.

Despite these obstacles New Women of Empire is never less than a fascinating read, and many of these chapter case studies could well be expanded for fuller publication.