The New Voices of Science Fiction 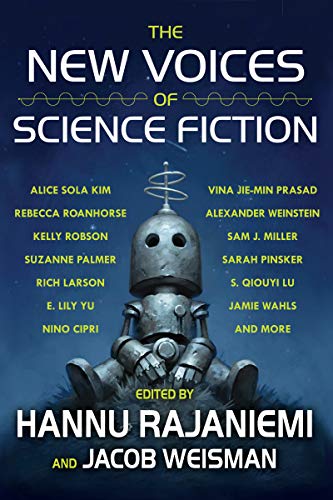 Anthologies are purpose-driven books. Some collect the best works of a given year; others take up a single idea and spin it out in myriad directions. Science fiction is still, perhaps beyond all other genres, driven by short fiction, so SF shelves are thick with anthologies of best, new, vintage, favorite, shocking stories. But in spite of the genre’s prognosticating tendencies, it still struggles to imagine its own future. What comes next is maddeningly elusive.

The New Voices of Science Fiction reflects this struggle. In his introduction, Jacob Weisman is up front that the book’s unifying thread is simply “stories by writers whom [we] believe will become increasingly important in the years to come,” without ever precisely saying what criteria they used. Hanni Rajaneimi is more up front about the idiosyncrasy at work: “I know what the writers who have shaped me sound like.”

The resulting assortment is, at its best, deeply subjective. Some of the stories are widely acclaimed choices, certain of their place in the genre. Rebecca Roanhorse’s “Welcome to Your Authentic Indian ExperienceTM” is strong enough to anchor the collection, though it appears in the book’s swirling middle. Roanhorse integrates the complexities and absurdities of Indigenous appropriation in near-future customer service: “What Theresa doesn’t understand is that tourists don’t want a real Indian experience. They want what they see in the movies, and who can blame then? Movie Indians are terrific!”

Other stories are more tentative: odd inclusions, conceptually driven, but lacking the stylish delivery common to the best contemporary SF. Suzanne Palmer’s “The Secret Life of Bots” has a certain WALL-E-style pathos, but the emotional weight is nearly drowned in a morass of techno-babble: “Three compartments down, it found the mangled remains of the other hullbot, 4340, tangled in the dessicated firestopping. Its foaming gun and climbing limbs had been torn off, and the entire back half of its tank had been chewed through.” Roanhorse and Palmer’s are radically different, almost diametrically opposed, approaches to what SF can be. Readers who enjoy one approach are likely to reject another.

A few stories manage both literary quality and conceptual innovation. Nino Cipri’s “The Shape of My Name” is a heart-rending vision of the struggles of time travelers bound to a single house and family. Parents abandon children; identities fall apart. Characters live in multiple eras, but never quite come to terms with the social and cultural changes that come with the future. One woman might step far enough into the future to love another, and yet be unable to accept gender fluidity. Generation gaps persist, even when children are born decades before their mothers are conceived.

Jason Sanford’s “Toppers” presents an apocalyptic future in which New York City is subsumed not by the ocean but by a fog that dismantles identity and memory. David Erik Nelson’s “In the Sharing Place” explores individual and cultural grief in the face of the end of a civilization. Vina Jie-Min Prasad’s “A Series of Steaks” plays with self-invention in an age of 3D-printed food. S. Qiouyu Lu’s “Mother Tongues” examines commoditized language and asks how much of the self is tied up in the words we use.

The New Voices of Science Fiction isn’t a terrible book, but it’s an uneven one, hurled into a market overflowing with really excellent anthologies. Every story in this book has been published elsewhere, and the best ones appear in other collections that know their purposes and audiences better.