The New Urban Crisis: How Our Cities Are Increasing Inequality, Deepening Segregation, and Failing the Middle Class—and What We Can Do About It 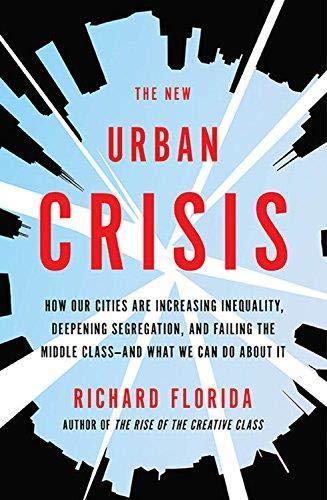 Every generation spawns a handful of academics who become public intellectual rock stars resonating across a broad swath of social concerns far beyond their specific specializations.

For example, anthropologist Margaret Mead became a household name some 60 years ago though many people would have been hard pressed to elaborate on what she was famous for other than something to do with sex and savages. A little later, urban sociologist and activist Jane Jacobs grabbed a large slice of the popular imagination through her lifelong crusade against the bulldozing of inner cities for redevelopment.

Today, thinkers such as linguist Noam Chomsky and physicist Stephen Hawking have become so broadly recognized by the general public they that they are regarded as all-round critics of contemporary society—intellectual and moral arbiters of change.

Urban studies professor Richard Florida has not yet reached this superstar stature, but seemed well on track to achieve it since catapulting into the public eye as a relatively young and charismatic researcher via his groundbreaking 2002 book The Rise of the Creative Class. In this work, Florida asserted that luring talented members of this growing group of people who work with their minds, such as artists and other culture producers, techies, upper managers, researchers and educators was the key to reviving cities under the post-industrial knowledge-driven economy.

Tax breaks, new business parks, convention centers and stadiums were not sufficient to attract companies. Instead, what was needed were “places that had lots of high-paying jobs—or a thick labor market; lots of people to meet and date—what I called a thick mating market; and a vibrant quality of place, with great restaurants and cafes, a music scene, and lots of other things to do.”  Big cities that enabled this synergistic clustering of technology, talent and tolerance of workplace diversity would excel in this kind of new age economic development.

Indeed, Florida’s prediction seemed to hit the nail right on the head as the young, educated and affluent surged back into gentrified city cores and inner suburbs, reversing decades of urban decay and suburban flight. Mayors, planners, and developers were happy to spruce up heritage buildings, densify housing, encourage the arts, designate bike lanes, improve walkability, and enhance amenities such as parks and recreational facilities believing that vibrant cityscapes would be a magnet for urban sophisticates and spur broader regional growth.

Despite the accolades received by The Rise of the Creative Class, the rosy picture it painted soon provoked a backlash from across the ideological spectrum. Our brightest and best cities may seem to be thriving, but underlying countercurrents are exacerbating pre-existing uneven development. In fact, the cities that are experiencing the greatest revivals have the greatest and fastest growing gap between rich and poor.

On reexamining his demographic databases and devising new composite indicators, Florida found that the flip side of this back-to-the-city revitalization movement was increasingly unaffordable housing, escalating economic inequality, the disappearance of middle-class neighborhoods, the migration of poverty to suburbs, and much more.

“As techies, professionals and the rich flowed back in to urban cores, the less advantaged members of the working and service classes, as well as some artists and musicians were being priced out. In New York’s So-Ho, the artistic and creative ferment that I had noted as a student was giving way to a new kind of homogeneity of wealthy people, high-end restaurants, and luxury shops.”

Under this scenario, the people who do the everyday work of keeping a city and its residents safe, supported and served—the firemen, teachers, nurses, policemen, bus drivers, hotel and restaurant workers etc. face long daily commutes or leave.

So the net result of this new clustering of creative talent and economic assets is “a lopsided, unequal urbanism in which a relative handful of superstar cities, and a few elite neighborhoods within them benefit while many other places stagnate or fall behind.”

Of the 23 world superstar cities Florida’s database generated, New York and London represent the apex, with cities like Tokyo, Hong Kong, Paris, Singapore, and Los Angeles occupying a second tier of global urban power ahead of a third rank of regional financial and economic centers with key global functions such as Boston, Washington, D.C., and San Francisco.

“This small group of elite places forges ever forward, while many—if not most—others struggle, stagnate, or fall behind. I call this process winner-take-all urbanism.”

Along with superstar stature and the accompanying clustering forces come escalating real estate prices and unprecedented levels of inequality. For the price of one SoHo apartment (with a median value of about $3 million) you could buy 18 homes in Las Vegas, 29 in Detroit and 38 in Memphis.

“In these places, mere gentrification has escalated into what some have called ‘plutocratization.’ Some of their most vibrant, innovative urban neighborhoods are turning into deadened trophy districts, where the global super-rich park their money in high-end housing investments as opposed to places in which to live.”

This fosters a NIMBY (not in my backyard) mentality to keep urban housing prices unnecessarily high. “This behavior isn’t just selfish; it’s destructive. By limiting density and clustering, NIMBYs hold back the urban innovation that powers growth. That’s why I prefer to call them the New Urban Luddites . . .”

In addition to superstar city dominance and the accompanying displacement of the less affluent, the key dimensions of the New Urban Crisis are the shrinking middle class, the burgeoning crisis of the suburbs and the crisis of urbanization in the developing world.

From 1970 to 2012, the percent of American families living in middle-class neighborhoods in all cities fell from 60 to 40, while the share living in either poor or affluent neighborhoods rose substantially. Instead of white flight from depressed city cores to American Dream suburbs the flow has reversed such that the outliers are experiencing growing poverty, insecurity and crime as lines of economic and racial segregation are being redrawn.

“In place of the old class divide of poor cities versus rich suburbs a new pattern has emerged—a Patchwork Metropolis in which small areas of privilege and large swaths of distress and poverty crisscross city and suburb alike.”

The book does not really do justice to the last key dimension, cities in the developing world, allocated only 17 pages out of 216 pages of text. But Florida’s cursory overview paints a bleak picture of urbanization without growth, wherein people continue to flood into cities but see little or no improvement in their living standards.

So what can be done about this multidimensional New Urban Crisis? Florida remains staunch in his conviction that cities are the most powerful economic engines and that the solution to the crisis is more, not less, urbanism. But this must be a new, improved and more inclusive urbanism for all which reduces rather than exacerbates economic and social disparities.

While Florida was writing The New Urban Crisis it appeared that a new Democratic administration would be receptive to the kind of sustained national investment that a more inclusive urbanism demands. However, the Trump victory means little if any spending on affordable housing, transit, poverty programs and the like, so some combination of regional initiatives, NGOs and local leadership will have to step into the breach.

Despite this mismatch of a blueprint for democratizing the city and today’s Republican reality, The New Urban Crisis is well worth reading for the original research, clear-headed critique and the skilled analysis of solid data. In particular, Florida’s willingness to admit his past mistakes is commendable, especially in a world where “truths” seem to be increasingly flexible.

Furthermore, Florida writes in personally positioned transparent language without taking refuge in academic jargon, making the book accessible to a broad audience, although the people who most need to read a systematic unpacking of the root causes of the middle and working class decline probably are among the least likely to do so.

The New Urban Crisis will not be a bestseller like The Creative Class. There are no aha moments though almost every page offers interesting factoids. The scope is too ambitious for such a slim volume and the myriad tables and graphics, though simple enough to follow, do not make for compelling reading! In addition, while the terms and catchphrases Florida coins are useful, they tend to belabor the obvious.

In sum, Florida is convincing about the implications of fostering a handful of superstar cities which exacerbate existing extreme inequalities, but his own crowning as a public intellectual rock star will have to wait. Meanwhile, alienated liberals are fast honing the kind of local organization and activism skills which will come in handy when the day of the inclusive urban revolution finally dawns.