A New Shoah: The Untold Story of Israel's Victims of Terrorism 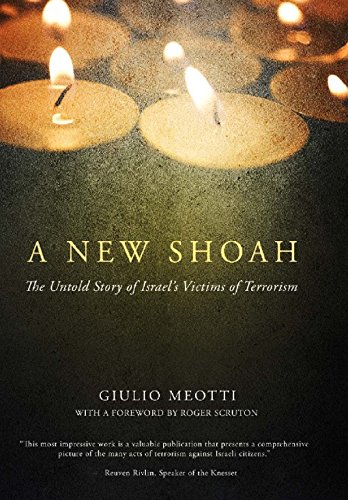 “Every Jew has a name.” So begins this historic work by Italian reporter Giulio Meotti. They are the words of Uri Baruch, a child of Holocaust survivors who lost a daughter to Palestinian terrorists. These words are important to the Israeli psyche, bringing to mind the millions of Jews who died anonymously in Nazi death camps.
Now a new Holocaust, or Shoah, is happening in Israel. The tickers crawl across the screens of major news networks, “Four Israelis killed in Palestinian attack,” and Western eyes hardly take notice; such news has become all too common. Meotti seeks to ensure that these latest victims of antiSemitism are more than just tickers on the news screen. With this book, seven years in the making, he offers the names and stories of the victims of daily terror in Israel.

A New Shoah is more than a list of names and records. In the midst of gut-wrenching stories of loss and survival, Meotti teaches the reader about Israel and the Jewish nation. He draws parallels across history from the Babylonian Exile, to Roman persecution, to the rampant antiSemitism present in today’s Middle East. And he tells the story of Israel’s struggle for survival, both physical and political, as the Israelis build a new state on desert land, surrounded by hostile nations.

Still, the majority of this book is filled with the lives and deaths of Jewish victims of terror. A New Shoah will make you angry, occasionally it will make you smile, but mostly it will break your heart.

Most of the targets of Islamic terror in Israel are not military. They are civilian—often women and children. Meotti does not spare the reader the details of the animal brutality in which these hate crimes are committed. To do so would deny the gravity of the suffering of these victims, and thus dishonor their memory.

A New Shoah is a must read for its historic significance and current relevance. It is an important work, not just to the Israeli people, but to the world. Just as we should remember the horror of the Holocaust so that it never happens again, we should recognize the hatred-fueled violence that has happened and continues to happen in Israel. We cannot ignore the violence, or its roots. As Meotti reminds us, “Every Jew has a name.”