The New Rules of Marketing and PR: How to Use News Releases, Blogs, Podcasting, Viral Marketing and Online Media to Reach Buyers Directly 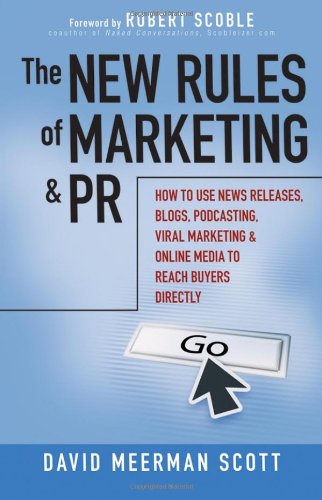 Although The New Rules of Marketing and PR is an update of the 2007 first edition book of the same name, it can also be considered as a sequel to Jay Conrad Levinson’s seminal Guerilla Marketing and its progeny.

Levinson and author David Meerman Scott share more than their love of three-word names, they also share a love of unconventional—that is to say guerilla—forms of branding and awareness. This is coupled with their disdain of the traditional paths of marketing and public relations: specifically print, broadcast, open (posters and billboards), and direct (mailing and phone calls).

Scott’s primary hypothesis can be summed up with the words “insightful” and “helpful.” The author encourages us to stop advertising and start communicating; the former is a one-way street, while the latter, a two-way street. By communicating genuine ideas that connect with readers by offering some sort of value or insight into their problems, you’ve created a lead or customer for the service or product that you’re hoping to promote.

In a sense, it’s promotion without the promotion. It’s the creating of trust in what you have to say and having that trust lead people to you when the time comes for them to act—perhaps a phone call, an email, or a simple comment in a blog.

In addition to listing the various forms in which to create these avenues of content, which include:

Scott has also detailed the mindset in which one should present the work:

·      Have a goal, such as encouraging people to attend a seminar or sign up for a newsletter.

·      But write like a publisher, to inform or educate, and not like someone trying to sell something.

·      And as a publisher, try to understand the problems and needs of the audience and address them.

·      Finally, as a publisher, write to keep the engaged and entertained.

For himself, Scott has hit all of the points, although on the last point of being entertaining, the book gets a bit repetitive toward the end. Perhaps this is because one fault of his previous iteration of The New Rules was that it didn’t cover enough of the emerging technologies eclipsing the then current ones, such as focusing on MySpace instead of Facebook; he has since rectified that in this edition.

And that’s the real flaw in this otherwise, well-written addition to the guerrilla marketing toolset: the speed of innovation means that new avenues of communications will be created that Scott never realized.

But this is a hurdle that anyone writing such a book must overcome and Scott has, for the most part, accomplished it and with both clarity and depth.

Reviewer Logan Lo is a small business consultant under the guise of an intellectual property attorney and a certified general real estate appraiser. He is currently an associate at the commercial litigation firm Woods & Lonergan in their Intellectual Property and Real Estate Practices.