New Daughters of Africa: An International Anthology of Writing by Women of African Descent 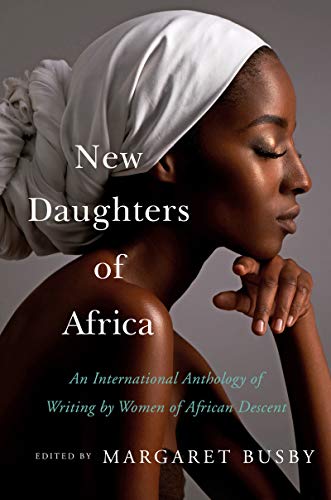 It was deemed a vital document then, and it takes its job just as seriously now, bringing together over 200 female voices of color, an incredible range of experience and backgrounds and perspectives and voices, told in every which way important things can be told: memoir, lecture, poem, letters, diary entries, short stories, essays, political speeches, dialogues, humor, reportage, and even oral history.

The topics are just as varied and shine bright lights on the lives of critically underrepresented women of color, and on the contributions of these gifted literary scholars: motherhood, slavery, love, work, immigration, assimilation, friendship, thwarted aspiration, infidelity, racism, marriage, poverty, and on and on.

In fact, the only thing that is not varied here is the gloriously even quality of the writing. These are stories for crying and laughing and thinking. They are narratives for understanding, for seeking, for finding, yes, because it is a catalogue of lives that are not shown as much and as consistently as we need them to be.

See for yourself. Here is Elizabeth Nunez in “Discovering my Mother”:

“Quite accidentally I discovered that my mother read books. I didn’t think she did. I thought her only interests were domestic, all related to her children, her home, her social circles. It turned out, however, that she had read my first novel, When Rocks Dance. I hadn’t expected her to. Years ago, I had left the novel for my father. He never read it. As far as I know, he never read a single one of my eight books. When I found out my mother had read When Rocks Dance, I gave her my next two novels. Beyond the Limbo Silence and Bruised Hibiscus. She read them too and was full of praise for me. I was her favorite author, she said.”

And here is Zadie Smith, receiving the Langston Hughes Medal in 2017 with “Speech for Langston”:

“I don’t know what I am doing on a list of names that includes James Baldwin and Toni Morrison, Derek Walcott and Octavia Butler, but I am so grateful to find myself in their company. Growing up in England, in the eighties, these were some of the writers my mother gave me, to remind me that no country has the power to decide whether or not it will ‘tolerate’ a black child or decide on her true identity, for the black child’s inheritance is borderless and enormous and needs no such external authentication.”

And here you have a brave story—for its profundity and complexity, as much as for its beauty— from Chinelo Okparanta. Titled “Trump in the Classroom,” it tells of encountering a disturbing narrative while teaching a writing workshop in a heavily pro-Trump area, to an all-white classroom, save for one student and herself:

“In the student’s story, the colony—and all the black people in it—was suddenly set to be destroyed, because a few of the black people had taken to bringing up the issue of slavery. They were still living out the legacy and pain of it—an inherited trauma—despite the fact that this was hundreds of years after. This complaining was getting to be too much for the whites, so the whites had now arrived at a solution: blow up, destroy, obliterate all the dark-skinned people. Banishing them to a malaria-infested colony was no longer enough. Rather, put an end to the legacy of slavery once and for all, so that they would no longer have to listen to complaints, the inconvenience of guilt.”

It is, perhaps, this bulk, this excess, this non-superfluous surplus, this literal and literary embarrassment of riches that sends the strongest of messages. Yes, there is this much talent and achievement here in the literature of people of color, the roots of these writers in Africa, but their immense contribution extends to every continent. It is this good. It is this great. So, how is it that it continues to be such a low percentage of all that is published, widely distributed, critiqued, discussed, taught, and shared?