A New Birth of Freedom: The Visitor 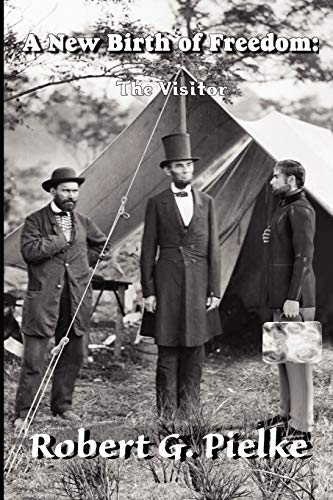 Sometimes the scope of human tragedy is too large to comprehend. The mind grasps for alternate explanations in order to come to terms with staggering loss.

Robert Pielke’s A New Birth of Freedom: The Visitor tries to reconcile the over 50,000 lives lost during the three-day Battle of Gettysburg. How could the death toll be so catastrophic? How could the number of casualties be explained? How could men cut each other down in such a brutal way? Because according to Pielke, it never happened—not the way historians would have us believe.

His revisionist account takes a science fiction approach. What if an alien invasion were actually to blame for the carnage inflicted during the pivotal moment of the Civil War? Surely, 19th century cannonballs and gunfire could not have killed more Americans than were lost in the entire Vietnam War. Some other sinister force had to be responsible.

Enter Edwin Blair, a mysterious time traveling stranger from the 23rd century, a.k.a. the visitor of the title. In his time, Earth is on the brink of destruction. An infestation of locust-like, technologically savvy aliens has mercilessly descended on the planet, killing humans like ants and devouring every type of vegetation in existence.

The key to possible survival lies in tampering with their time travel abilities. Blair knows their spacecraft will appear over the Pennsylvania fields during the Battle of Gettysburg. The only way to stop them is a full out assault by the combined Union and Confederate forces in order to disable their ships stranding them in 1863.

Abraham Lincoln is the man that Blair must convince in order to set his plan in motion. In a fascinating look at the revered president, Pielke shows a shrewd yet deeply curious Lincoln. The depiction does Lincoln justice illustrating his intellectual and open-minded nature.

While his advisers look upon Blair as a lunatic, it is Lincoln who believes his spectacular claims. His mind is able to grasp concepts like extraterrestrial life and computer science. The scope of his intelligence is not limited to the period of time in which he finds himself. He is able to look beyond his contemporary world and see the bigger picture. War is war and he knows that understanding the enemy—whoever or whatever it is—provides the only path to victory.

Another key figure in Blair’s plan is General Robert E. Lee. He must convince the esteemed solider to lay down his weapons and join in a temporary truce with the Union Army. Without the combined firepower of both sides, Blair’s plan will not work. Lee does not disappoint. The distinguished gentleman stands head and shoulders above the field both figuratively and literally. He too is able to operate on faith. He does not understand what Blair is telling him, but he is willing to risk everything in order to at least give Blair’s plan a chance.

What ultimately convinces Lee? Blair demonstrates the apocalyptic force of the aliens’ weaponry. It leaves even a hardened warrior like Lee shaken to the core. While he may be unable to parse through the details of Blair’s story, Lee cannot doubt the destructive ability of which he speaks.

It is intriguing to witness two of the greatest military minds of the 19th century grapple with the concept of an alien attack.

Pielke provides a glimpse into how Lincoln and Lee might have handled things differently if they had been faced with such a possibility. Their stature, poise and determination serve as a source of comfort during a time when capable leadership would be of the utmost importance.

Having leaders who can be depended upon during a time of crisis is something the American consciousness innately craves. If only the heroes of the past could save the country from its future problems—in Pielke’s account they are able to do just that.

Overall, A New Birth of Freedom: The Visitor is a fascinating look at how the heroes of America’s past strive to save its future.