The New Atheist Novel: Philosophy, Fiction and Polemic after 9/11 (New Directions in Religion and Literature) 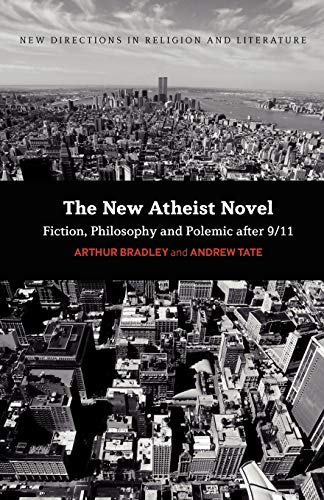 “To our eyes, though, it is possible to detect an obscure but even more compelling reason for the massive appeal of the New Atheism: it constitutes a new and powerful creation mythology that—like most mythologies—performs an implicit anthropological service.”

Thus opens the newest salvo in the battle between the two perceived goods and evils, depending on which side of the discussion you support. More implicit, it is the newest battle between Christians and Richard Dawkins and the New Atheist movement, represented by four outstanding writers: Ian McEwan, Martin Amis, Phillip Pullman and Salman Rushdie. All skeptics, all philosophers, all presumably members of “Friends of Richard,” and all the newest straw men for which the traditionalist Christian archers may practice. All of this is completed based on the how these four men “attack” the Faith through fiction—thus the title.

Yes, this reviewer was hoping for a real novel but was not disappointed in the subject, the writing, the research or the outcome of this study.

Being familiar with the four targeted authors, as well as Dawkins, however, is a must so one can wend through this relatively short text. Nor is it a series of book reviews, for much of the commentary is based on articles authored by these gentlemen as well as a wide range of others. It is closer to a review of the religiosity of the commentators and how the four men targeted somehow violate their ideals.

In fact, Dawkins, though not reviewed himself, and the New Atheist movement, which is never defined, is mention more often than any other source. Dawkins is proclaimed as the leader of this pack of four. For example, opening the second chapter, Bradley and Tate state, “It is tempting to say—if his [Ian McEwan’s] fiction did not already exist—Dawkins and company would have invented it, so completely does it vindicate their [New Atheist’s] world views.” This is just one of the themes that connect the introduction, proofs, and conclusion of Bradley and Tate.

Beyond the religious and political positions taken by the authors, this is a well written and documented book examining the newest battle lines being drawn in this seemingly unending conflict, with an unstated “onward Christian soldiers” bolstering the text. Bradley and Tate go well beyond the tomes and articles of their four targets to provide the foundation for their position and conclusion. So much so that this reviewer needed to dig deep into his own, his city’s, and the university libraries to keep up with the battle. J. R. R. Tolkien, Graham Ward, Bertrand Russell, Karl Marx, George W. Bush, Sigmund Freud and others are thrown at the reader to justify, clarify, and support the final verdict. This marks a diversity of research that marks a well-written case concerning faith versus secular humanitarianism.

It may also make the reader feel belittled if the resources or knowledge of the other writers the authors bring into the mix are unfamiliar. There is a running feeling of “elitism” throughout the book. Of course, Bradley and Tate are British intellectuals, which, to some, justifies the rhetoric.

Though the reader may question the validity of the opinions stated by Bradley and Tate, one cannot fault the two for their steadfast position and the accuracy of their assaults. Though their conclusion is something any reviewer may state concerning any novel or article written by the sectarian and secular alike.

“This book,” state the authors in their conclusion, “has tried to argue that their [McEwan and company] fictions are by no means immune to the very irrationalism, intolerance and ignorance they seek to contest.” Yet, to this reviewer, all fiction amounts to some level of irrationalization and ignorance to achieve its goals.

However, Bradley and Tate also state that the religious extremism and those who write the New Atheist novels should first look to the beam in their own eyes and then to the mote in another’s to understand their own lack of rational thought. It becomes clear that the conclusion is meant to appease all while pressing their position.

Sun Tzu said that one must know his opposition as well as he knows himself. This is a must for both sides, so the arguments are based on the same battlefield and directed toward real opponents and not straw targets.