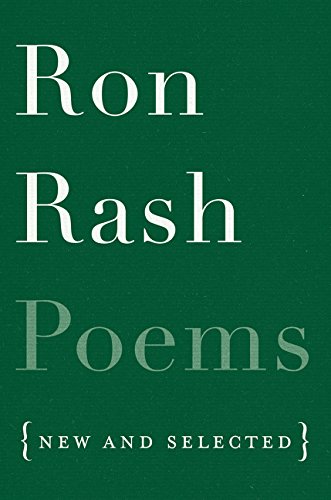 "poems that are truly memorable, full of sorrow yet open to redemption and beauty."

Nostalgia—the sweet sadness of memory. That describes the tone of most of Ron Rash’s Poems: New and Selected as well as his award winning fiction. Much like an old lyrical ballad, he sings to the land, the waters, and the people of his place in the South.

The poems are a kind of prayer of loss and going on, much like Stephen Collin Fosters’ ballad “Hard Times, Come Again No More.” Most are narrative or dramatic monologues delivered in a vivid yet plain voice with a fine sense of timing. Rather than imposing themes, he finds meaning in the stories of the people and land in these narrative and lyrical poems.

His first poetry book, Eureka Mill (1998), weaves together stories on his family’s migration from North Carolina to the cotton mill town of Chester, South Carolina. In “Mill Village” from that book he describes the town:

Mill houses lined both sides of every road

like boxcars on a track. They were so close

a man could piss off his own front porch,

hit four houses if he had the wind.

Every time your neighbors had a fight,

then made up in bed as couples do,

you’d know, whether or not you wanted to.

Among the Believers (2000) takes us into the evangelical world of his people. Here the author turns to the water as symbol of life and death.

On the bank of a river

he saw a tall tree, one half

crimson fire from root to crown,

the other half green with leaves.

All night the firelight colored

the river red as a wound.

A full moon loomed as he walked

into the waist-deep water,

bathed and tugged by a current

and he staggered to the shore

Such historical poems speak of the acts of common folk in vivid yet mythic terms.

Perhaps the strongest book, Raising the Dead (2002) opens with the powerful portraits of those suffering displacement as a result of the power company’s deliberate flooding of Jocassee Valley, South Carolina. Here water is considered death and loss as the citizens watched their homes and land taken from them. As critic Tim Peeler says, “Rash closes a poem as well as anyone writing today. As a result, the ghosts in these poems, of the Jocassee Valley and its aqua-burial and of the revisited ancestors and historical figures will haunt the reader beyond the pages of the book.” The singular beauty of such poems as “Shelton Laurel” is achieved through a brother’s letter to his sister.

A branch runs through this cavern, in it trout

whose eyes are blind from years of too much dark.

I envy them for all they haven’t seen,

I tell you of,

and then return to you, resume a life

stilled like the hands of a broken pocket watch

beside a stream bank deep in Shelton Laurel.

A favorite poem is “At Reid Hartley’s Junkyard” in which the author tells of taking his aunt to visit the wrecked car in which her son died.

gets in, stares through glass her son

looked through the last time he knew

the world, as though believing she

from this wreckage, as I will

when I look past my aunt’s ruined

her right foot pressed to the brake.

The final two sections from Waking (2011) and in the New Poems section fit with the tone, and author Ann Fisher declares “Ron Rash's Waking welcomes us into a world where memories, like crystalline water, come 'slow and clear' yet where the past—though vividly apprehended—remains 'all beyond your reach.' He writes of the Welsh and Scots who came to Appalachia, to settle near Blowing Rock in 'Dismal,' North Carolina. He writes of their descendents—their labor, their hardships, their sense of community and beauty, their meanness and kindness.”

In concrete images drawn through memory’s stream, Ron Rash writes poems that are truly memorable, full of sorrow yet open to redemption and beauty.