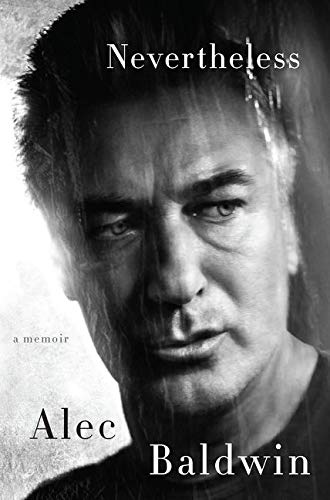 Before the book is even opened, Nevertheless, the new memoir by Trump manqué Alec Baldwin has much to tell us.

First, there’s that title, Nevertheless, a dandy title really, even if it suggests that all that our guy has accomplished has been in spite of something else. In spite of what, exactly, we are never told. An ex-wife perhaps, or that “piggish” phone message, or a general sort of snappishness on the part of our hero, or even, perhaps, in spite of Harrison Ford?

(More on that in a moment.)

And then there is that photo—an author’s photo so dandy that it ended up on the front cover, not the rear, where there is another photo of the author, this one from decades ago.

Still, there is this to know about that front cover: looking sort of like a head from an angry Mount Rushmore, with that recognizably handsome face photographically filtered, as if through a rainy-day window, with the years showing and the lips tight.

The cover photo, therefore, stands as metaphor for the book itself, what with all those years dredged up, and what with the author’s lips, in telling his life story, being held so very very tight.

Mr. Baldwin prepares us for what will come in the first few pages of his memoir.

In his preface, he sets the stage by explaining just why he decided to write a memoir at this moment in his life:

“I’m not writing it to explain some of the painful situations I’ve either landed in or thrown myself into. I’m writing it because I was paid to write it. And as we go along, you’ll know that the mercenary force is strong in this one. You might want to stop there and put the book down, knowing that its theme is that I did a lot of things for money. Anything truly worthwhile that emerged was just a bit of luck or wonderful alchemy.”

(Note to self: whenever the author, on page nine, suggests that I might want to put the book down, it is a good idea to listen to him.)

The concept of the memoir seems to have occurred to Mr. Baldwin (and HarperCollins as well) as the answer to the question of just what does an actor do after having completed a hugely successful run on a long-running and hugely successful television sitcom. Surely at the moment in which the Dictaphone was first clicked on, the author had no idea that he would, in very short order find his place in pop culture history by portraying our most addled world leader on a certain late night comedy show. Which either means that the book in our hands has been already made irrelevant by present-day events, or that it is now ripe for a devil of an epilogue when the trade paper is released.

But as to the book itself, it is a pedestrian thing.

And, in its first hundred-odd pages, a rather dull thing, reminding the reader of, of all things, Auntie Mame wrestling with her own memoir: “How bleak was my puberty, such an improvement over ‘My puberty in Buffalo was drab.’”

Substitute Massapequa for Buffalo and you get the idea.

If Baldwin does not exactly bring his Long Island childhood to life for the reader—Proust and his cookie have nothing to fear in terms of remembrance of things past—he does extoll his home’s proximity to New York City and its television stations with this:

“On our TV, the Late Show broadcast movies like How Green Was My Valley, Five Graves to Cairo, or Passage to Marseille. At night, the pattern was always the same. My dad would say, ‘You’d better get up to bed.’ Then he would read the old capsule movie reviews from the New York Times TV section. These were pithy, often funny one-liners that described the film. (Example: ‘Ball of Fire: Barbara Stanwyck tells Gary Cooper where he can go.’) My father would let out a low whistle: then he would say, ‘Witness for the Prosecution. Now that’s a good one.’ I’d ask if I could watch some of it, and he would say, ‘OK, but just a few minutes.’ He’d smile at the opening credits, and within fifteen minutes, he was out.”

But while Baldwin earns himself some points for mentioning Billy Wilder’s lesser knowns and later blowing kisses to Franklin Pangborn, Thelma Ritter, Maureen Stapleton, and Hermione Gingold, and also for stirring the embers that still burn in the reader’s heart for the old New York Times’ TV guide, the truth of it is that the tales from childhood section is pretty much a slog. And that the whole thing doesn’t come together until years pass and Mr. Baldwin began to resemble the person pictured on the back of the book, the young gravel-voiced leading man who make a string of great movies in the ’80s, and fell of a rooftop on Knots Landing when the time had come for him to leave the show.

Indeed, the pages dedicated to his time on Knots (and what a time it was, as he played a slightly unhinged televangelist who abused his wife, worried his sister, Val, and played the guilt chord for the mother (played by the divine Julie Harris) who deserted him that it, in time, became a full symphony.

Happily, giving credit where it is due, Baldwin writes: “No one I’ve worked with during my career has come close to Julie Harris, in terms of the reservoir of humanity, talent, and professionalism that she embodied.”

“When the cameras rolled, I simply focused on Julie, and she took you where the scene needed to go. When encountering her warm eyes and her soothing voice, I sometimes wondered what it would be like to have a mother that present, that soulful. But comparing my own mother to Julie was, obviously, unfair. Julie was an actress being paid to express those feelings.”

As leitmotivs go, surely it is one of the least welcome in a memoir.

As Baldwin relates it, Knots Landing was far more than just warm eyes and soothing voices. What with Abby and Val and Karen and the three actresses playing these leads taking all the good plotlines and airtime. And what with Baldwin himself developing something of a cocaine habit at this time in his life.

In a sequence of the book that is not unlike all those endless ballets that Gene Kelly insisted on inserting into his movie musicals in order to stop the plot dead, Baldwin illustrates his issues with drugs in an extended seven-page segment in which he is demanding, abusive, drunk, manic when conscious and nearly comatose when not—all in Oregon’s Salishan Lodge in 1984.

(Note that, in comparison to this, he dedicates less than half that number of pages to telling the story of his “first show business love,” actress Janine Turner.)

Baldwin writes about his drug breakdown with a fervor and a zest that is missing from much of the less of the book, as if he were writing a dynamic scene that he might enjoy playing in the movie version.

Which is, in fact, the greatest flaw in the book. With a sort of coyness throughout, Baldwin seems intent upon telling us in great detail about those things that are, to put is as charitably as possible, of less than great interest (his love for classical music), while telling little or nothing about those things about which we would really like to know (Kim Basinger).

There is a great sense of control in these pages—a feeling that our author has strict boundaries and that, to get more or different details, the book’s advance had to have been greatly increased—except for one subject, a life experience from long ago that still seems to churn our author’s full raging lava core and hurl it exploding to the surface.

The reader suspects that, had Mr. Baldwin really let himself go, the entire book could have been written on this single subject and the movie that is the intersection between their two lives: The Hunt for Red October.

Like a certain president that he portrays, Baldwin seems to possess a powerful ability to nurse a grudge. And, from the telling of it, Baldwin’s losing the role of Jack Ryan to Harrison Ford in Patriot Games, the sequel to The Hunt for Red October, is as painfully real today as it was all those years ago.

In an eight-page sequence of the book, Baldwin recounts how, in spite of the great success of The Hunt for Red October, he ultimately was passed over for the sequel and watched it be given to Mr. Ford, who emerges as the main villain of the piece.

As Baldwin puts it:

“[October director] John [McTiernan] told me he spoke with Ford and asked if he was aware that Paramount was in an active negotiation with me. Ford’s reply, according to John, was ‘Fuck him.’”

Ah, it’s like eight pages out of some Real Housewives city, and those two simple words seem to echo still in Baldwin’s head.

Churning for a reason that Ford might have acted the way he did, taking a part that was offered to him, Baldwin rather churlishly considers:

“Ford is one of the most successful stars in movie history. He has abundant fame, wealth, and the adulation of an adoring public and everyone in town. One thing he does not have is an Oscar, which must frustrate, if not burden him, after his long career.”

He then quotes a review of Ford’s acting that states that, in the movie reviewed, his acting “went from beige to taupe.” And the reader is left to wonder in which scrapbook Baldwin had to look to find the quote.

Then, perhaps to salve his wound, Baldwin suggests asks himself “whether I wanted a career where you are, by and large, asked to do the same thing, over and over again,” and takes a moment to pity Russell Crowe and Bruce Willis and, of course, Harrison Ford.

And finally, having relived these events, he writes:

“Eventually, Patriot Games was made with Harrison Ford in the role of Jack Ryan, and it made less money than Hunt when adjusted for inflation.”

And then, doubtless, the classical music was turned up loudly.

By book’s end, Baldwin is phlegmatic once more. He writes:

“And, finally, I have neither the time nor the talent to write a book. Nevertheless, I wrote this book with my own words and, such as it is, I offer it to you to entertain, to motivate, to inspire, and to learn. Not so much for you to learn about me, but for me to learn about me. I have learned so much while piecing this together. My thanks to you for reading it.”

And somewhere, in some small corner of his mind, the reader hears Peggy Lee. And she is singing, “Is that all there is?”