Never Saw Me Coming: A Novel 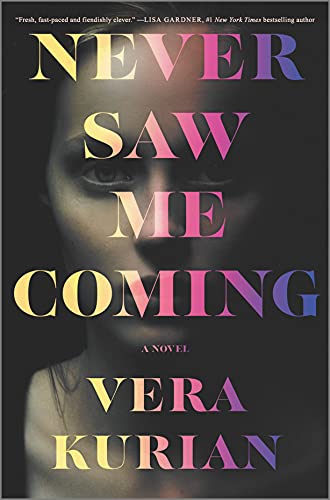 “fun, entertaining, and hard to put down, a twisty whodunit with a satisfying conclusion.”

Chloe Sevre is a psychopath.

Specifically, Chloe is one of several diagnosed psychopaths, college students who have been granted scholarships in exchange for their participation in a psychological study at a DC university. Chloe knows she is a psychopath, and she understands and even embraces her diagnosis, because Chloe is on a mission of revenge. Unfortunately, her plans are disrupted by the unexplained murders of several other participants, and Chloe must deduce who is hunting them and why. In no way, however, do these inconvenient murders dissuade her from completing her mission. Chloe is a psychopath, and she knows how to get what she wants.

Chloe has enrolled at Adams University not simply because her participation in the aforementioned study has covered tuition fees—though that is a bonus—but rather as part of a carefully arranged plot to take revenge on a childhood friend who had abused her years earlier, and who is now a student at Adams.

When the apparently unrelated murders interrupt her machinations, she joins forces with two other undergraduate-psychopaths to unravel the mystery: Charles, an ambitious, attractive, and wealthy upperclassman whose feelings about his psychopathy are somewhat more mixed than Chloe’s; and Andre, another freshman who is hiding an entirely different set of secrets. Chloe is perhaps the least sympathetic of the three, but she is the most interesting, and she carries the novel without becoming tiresome or unappealing.

Having a known psychopath as the main protagonist of the novel makes for an interesting twist, particularly with the supporting cast of (mostly) other psychopaths. Chloe is a complicated antiheroine: she is not necessarily evil although hardly traditionally good, and though her goals are shockingly violent and her actions often immoral, her motivation justifies both the end and the means. She is clever, manipulative, impulsive, and sometimes petulant, changing her personality and appearance to suit her objectives as needed. After she is attacked by an unknown assailant during a home invasion (in which Chloe is the invader in question), she realizes her safety is not as secure as she had assumed and pays a visit to campus security:

“I walked into the security office and feigned nervousness as a surprised secretary took in my face. ‘Hi,’ I said mousily. ‘Um, can I talk to someone? Security?’

“I was quickly ushered into an office where a man with a mustache sat. He was dad-aged—perfect. ‘Oh my,’ he said when he saw me.

“‘I was wondering if you could help me?’ I pointed, embarrassed, at my face. ‘This is...my ex-boyfriend. He sort of followed me to college.’

"He sat up, alarmed.

“‘Mr. Tedesco,’ I said, reading his nameplate. ‘He violated his restraining order. He always finds out where I am.’ I started to cry, making it look like I was desperately trying not to. His face crinkled and he pushed a box of tissues to me. ‘I already reported this, you know, to the police and talked with them about everything.’

“I blew my nose. ‘Yeah, I know. The one thing I was thinking . . . I can’t really control what happens in the dorms? I live in Brewser. Like yesterday, right after I got home from the police, all these people were just coming in, you know? I know they’re Adams students but it’s so easy for anyone to just walk in.’

“‘Oh honey, we don’t want that to happen. The security personnel—’

‘The security personnel are work-study students who watch Netflix and play Dog Dash on their phones,’ I said, hoping my tone wasn’t too harsh for my character. I teared up more. ‘Sorry. Could you put out a special notice or something so they really make sure to do security in Brewser?’

“He leaned across the table, his brown eyes big and sympathetic. ‘Absolutely, I will do everything in my power to make you feel safe.’”

The novel moves along briskly with chapter-ending cliffhangers that keep the reader hooked, a fresh take on the traditional “murder mystery” as Chloe and her companions must track down the killer while avoiding becoming victims themselves—or even, in Chloe’s case, while using the situation for her own personal benefit. Some of the plot points are a bit clichéd—a history of sexual violence being used as character development, for example—but not to the point that it compromises the story. Additionally, the total lack of an obligatory redemption arc for the homicidal heroine is delightfully refreshing.

By the end, there remain a few threads that remain untied: a mysterious witness whose identity is never fully clarified, or an MRI-based murder method that, while creative, seems practically challenging and unnecessarily complicated. However, these minor complaints aside, the book is fun, entertaining, and hard to put down, a twisty whodunit with a satisfying conclusion.