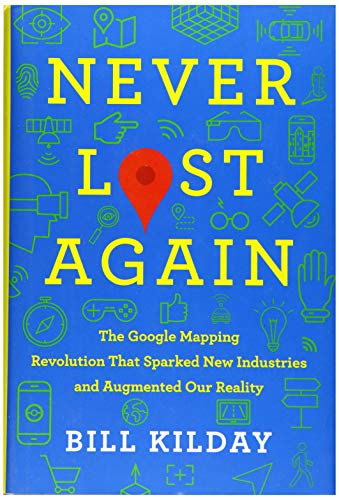 “Never Lost Again is an enjoyable and enlightening read.”

If you are over 30 you can probably remember big Rand McNally maps in your car to help you get from point A to point B. If you are under 30 you might ask “huh?” Haven’t we all used Google Maps forever?

In fact, we have not, and Bill Kilday tells the story of how the online mapping revolution came about and how a brash young startup company, that teetered on the edge of bankruptcy many times, came up with an amazing technology to let anyone see virtually any part of the planet through their EarthViewer software. This company, Keyhole, ended up being bought by another young company located just blocks away from it in Silicon Valley: Google. And then it gets really interesting.

Kilday, an early hire of Keyhole and its marketing director, is a compelling writer; the book is a fascinating play-by-play story not only of how Keyhole developed and built their mapping innovation but also how by becoming part of Google they were able to scale and expand its functionality by orders of magnitude more than they could envision when they first started. In this sense the book is a first-class business story, detailing the trials and tribulations of getting a tech startup off the ground and then the inside story of working at Google, particularly when it was still a relatively young company.

It’s easy to underestimate just how important mapping innovation was. Prior to the development of what ultimately became Google maps, digital mapping systems were expensive, hard to use, and limited in their functionality. By essentially mapping the entire physical world (including the ocean floor), the Google map team, led by software engineer and Keyhole founder John Hanke, created a platform on which billions of dollars of commerce runs. Imagine apps like Uber, Yelp, Open Table, and a host of others without easy-to-use, online maps.

Kilday’s story illuminates five broader lessons which are all too easy to overlook when we think about high-tech startups.

First, while these brilliant engineers and entrepreneurs did amazing things, Never Lost Again clearly shows is that they built their innovations on other innovations. They couldn’t have done what they did five years before because they underlying technology wasn’t ready. For example, interactive 3-D digital mapping was only possible because of powerful new graphic video processing chips from companies like Nvidia. And for their application to really take off users needed both wired and wireless broadband.

Second, in many ways it was harder to be create a successful digital startup then. A constant challenge for Keyhole was having enough servers to handle their increasing online traffic. When during the early stages of Gulf War, CNN used Keyhole to show satellite images from Iraq, and included the Keyhole website address, the massive increase in traffic crashed their servers. Today, any digital startup simply buys space from a cloud computing provider like Amazon Web Services.

The government’s role often goes far beyond that. Q-Tel, the venture capital arm of the CIA, was a key early investor in Keyhole at a time in which they were weeks from shutting their doors due to lack of revenue. Moreover, much of the data Keyhole, and later Google Maps, relied on to improve their systems came from federal, state, and local governments, including NASA and the Census Bureau. And the main reason smart phones came with GPS chips in them—the technology that lets the little blue dot that says where you are appear on your map—is because in 1996 the Federal Communications Commission mandated their inclusion.

Fourth, it’s fashionable these days for pundits to demonize Big Tech as profit-hungry, innovation-killing monopolies. But in reading Never Lost Again it becomes clear that it was Google’s very deep pockets, coupled with a willingness of the Google founders to think boldly, that let Keyhole—what became Google Maps—become orders of magnitude larger than anything the Keyhole founders imagined, all the while dropping the price to free.

As Kilday says, Google “gave them zero direction [and] unlimited resources.” In Keyhole’s early days the author talks with someone who had an idea to do street-level mapping complete with pictures. Kilday estimated that because of the vast scale of it, coupled with an uncertain business model, that this was science fiction, not likely to be seen in his lifetime. Google, with its Street View project, did it in less than five years.

Today, some complain that Google is a monopoly. But there are several interesting stories about how Google challenged big monopoly incumbents, like MapQuest, in the market and won because they provided a vastly superior product, often for free. And as their mapping app got better and they wanted to extend Google Street view around the world, they needed basic street mapping data from third party providers.

The problem was that companies had consolidated into two giant global companies. And when one of the companies, TeleAtlas, decided it could use its clout to charge what Google thought was an exorbitant amount, it forced Google to essentially map all the streets in the world itself (through StreetView), and then provide the information for free (what we experience in Google maps when that nice voice gives us turn by turn information).

Perhaps one of the most interesting questions raised by the book is why didn’t other companies do what Google did? It wasn’t like companies like Microsoft or Oracle or IBM didn’t know about these technologies. What Kilday’s book suggests is that when whole new technology systems, like the Internet, emerge—which is not all that often—it is often new companies that “get” the new technology best, largely because they are not encumbered by old thinking and practices.

Never Lost Again is an enjoyable and enlightening read.