Never Have I Ever: A Novel 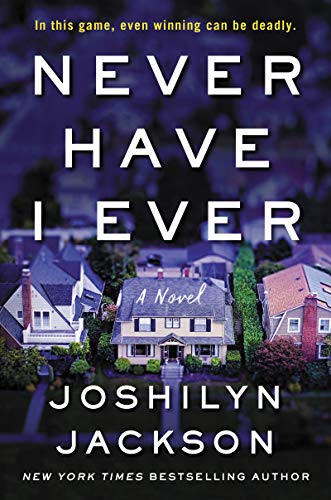 “Twists and turns abound in this suspenseful story, like the layers of an onion, peeled away one by one as the story progresses.”

New York Times bestselling writer Joshilyn Jackson has crafted an engaging and superbly written social thriller in Never Have I Ever. Jackson delights in imaginative use of language and interior monologue but never overdoes it in this thriller that plays on the nature of secrets.

She takes the reader on a journey constantly upended by hidden stories, as she weighs the protagonist’s agony against her self-discovery in revisiting her former secret-filled life. As Amy defends herself against Angelica Roux, a blackmailing protagonist, she uncovers her own strengths and a wellspring of gratitude for her current upscale, ordinary life.

Set in a modern suburb, inside a familiar book club with trusted friends, Jackson begins the journey of one woman who fiercely guards her otherworldly secrets, while being pursued by an intelligent, clever adversary in the person of popular girl Angelica Roux.

A well-etched aging beauty who preserves her carefully crafted identity with daily visits to the gym and expensive Botox treatments, Roux is desperate and ruthless. Her impromptu crashing of the women’s private book club is part of her plan to divest every woman of a secret so private it has to be worth money to keep it under wraps.

Jackson creates a believable antagonist who seems to love her teenaged son and unexpectedly admits to admiring Amy as an equal adversary, even as she pins her against a wall with threats to unravel Amy’s life.

Amy has her surprises, too. While other neighbors fall for Roux’s charms and open their hearts to her, Amy revisits the night in her youth when a catastrophic event toppled her young life, took the life of a neighbor, and sent her teenage crush to jail. And Amy used to be fat, with a capital F.

Years later, when Roux threatens disaster, Amy is thin and confident enough to have a devoted husband, a 15-year-old stepdaughter, and an infant son, all who reside in a Stepford-like suburbia within driving distance of the horrible night Amy has all but pushed into oblivion. Now, in order to defend herself against Roux’s blackmail, she meets the boy who in their youth, kissed the fat girl because he really liked her.

Because the writer is so skilled at the interior journey, the reader understands the importance of this reunion, and the temptation for Amy to succumb to the memory of her initial attraction. But it’s a tightrope that Roux has set Amy to walk on, protecting her beloved teenage stepdaughter, keeping the big story away from her husband, never revealing how vulnerable she is toward her predator.

Jackson uses the activity of diving to help calm Amy, and it’s so well woven into who she is that the time the reader spends under the water feels so natural and quiet and serene, a welcome break from the back-to-back intrigue.

But water can be full of danger as Jackson leads the reader to grapple with.  It is in a life-or-death incident while diving that Amy truly finds what she is made of and as readers, we strip away any ambiguity about Roux. Twists and turns abound in this suspenseful story, like the layers of an onion, peeled away one by one as the story progresses.

Entertaining, well etched and written by the hand of an artist, this tale of cat and mouse is a very worthy read.