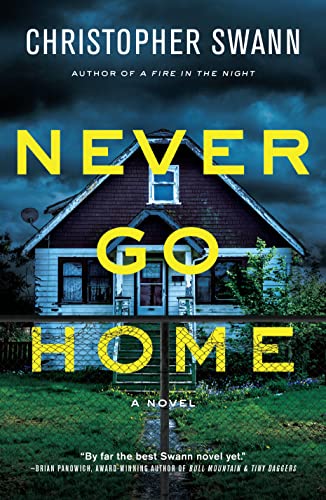 “a thoroughly realized, fast-paced, delightfully told story that secures the author’s position as a top-of-the-line writer in the genre mystery/crime thriller.”

Fans of Christopher Swann know Susannah Faulkner has baggage. In his wildly popular 2020 thriller, Never Turn Back ( A Faulkner Family Thriller Book 1,) Swann details her backstory: that her parents were murdered before her 10-year-old eyes, that she and her elder brother, Ethan, were raised by their Irish Uncle Gavin who owns an Atlanta bar named Ronan's that’s probably used as a front, that their shared tragedy caused the siblings to turn out differently, yet their bond remains indelible.

In Never Go Home (A Faulkner Family Thriller Book 2,) Swann comes out swinging in an action-packed thriller that will keep riveted readers on their toes. It is modern day San Antonio, and twenty-something year old Susannah Faulkner begins her story with a statement: “People cross me at their peril.” She dons a red wig, wears a jumpsuit, and a carries a pistol to track down the malevolent owner of an immigrant detention center at the behest of a missing detainee’s family, taking it upon herself to administer justice by drugging him before tying his wrists, obtaining forced information, turning her back, and leaving him tied up. Susannah shamelessly says, “What I did to Bobby Bonaroo was outright bonkers and involved breaking at least half a dozen federal laws. And it worked . . . I’m a high-functioning sociopath. I’ve just decided to put that part of me to good use.”

While preparing to fly to North Dakota to close her current case, Susannah’s plan is derailed by the unexpected appearance of Ceasar, who works for her uncle and tells her that her brother wants her to fly home to Atlanta, that it’s about their deceased father. When Ceasar is surprised by a text at touchdown from Gavin saying he’s waiting for him at the airport, confusion ensues as Susannah and Ceasar make their way to baggage claim and discover a group of paramedics administering to a prone Gavin, who’s had a serious heart attack. Breaking through the crowd to reach her uncle, Suzannah leans over him and hears the word “peaches” from Gavin’s whispering lips. Suspecting the word is some kind of instruction, Susannah sets off to solve the mystery, and the breakneck speed story at the center of Never Go Home is afoot.

Never Go Home is a clever crime/detective thriller whose layered story unravels on the mean streets of painstakingly detailed Atlanta’s criminal underbelly. The likable narrator’s language is hip and edgy; Susannah is a risk-taking, hyped-up vigilante on a reconnaissance mission, with a devil-may-care attitude a couple of steps shy of crazy, haunted by the childhood memories that put her in her dangerous line of work in the first place. In following Gavin’s prompt to discover the meaning behind the word peaches, Susannah is led from one high-stakes drama to the next as the story oscillates between saving a kidnap victim and unearthing the troubling truth behind her father’s involvement with stolen money.

From a warehouse roof, Susannah surveys the unfolding of a gang lord’s meeting, thinking it will lead to answers, and says, “This isn’t the first roof I’ve been on. It’s not even the first warehouse roof I’ve been on. . . . Most women my age have a regular job, are dating someone or already married, maybe even have a kid or two . . . Me, I’m two stories up, walking an enormous flat surface over half the size of a football field, getting ready to spy on a meeting between two guys who should be in prison.”

Family loyalty is at issue in Never Go Home, as Susannah balances duty to her uncle Gavin, support of her brother, and the truth behind the past actions of her father brought to light, when a sinister veteran named Finn, who served with Susannah and Ethan’s father in Iraq, appears. When Finn spurs Susannah to action by insinuating himself into Uncle Gavin’s dilemma, the plotlines collide to threaten all involved, and Susannah is left at the apex to act in the best interest of all.

In researching evidence left behind by her murdered father that might verify Finn’s assertion, Suzannah reveals the method to her madness: “When searching through data, I look for patterns. Human beings are pattern makers. We love routine, the familiar, the tried and true. When I’m trying to find someone, I look for patterns in the chaos. And once I find those patterns, I look for breaks, changes, interruptions . . . more often than not that break in the pattern will be a thread I can pick at and loosen and unravel so it leads me right where I need to go.”

Author Christopher Swann has penned a twisting thriller populated by realistic characters enmeshed in criminal minutia. His knowledge of the criminal underworld is impressive, and to it Swann brings an intelligence depicted by Susannah Faulkner, who has just enough swaggering irreverence to make her exceedingly cool. The book will thrill readers who love the element of surprise and a good challenge. It’s a thoroughly realized, fast-paced, delightfully told story that secures the author’s position as a top-of-the-line writer in the genre mystery/crime thriller.