Never Get a "Real" Job: How to Dump Your Boss, Build a Business and Not Go Broke 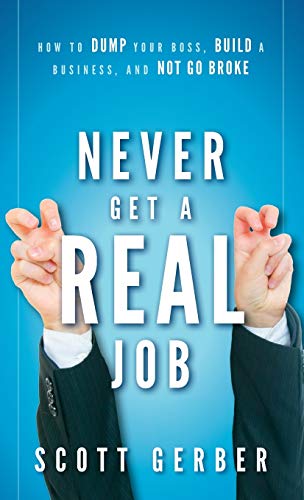 The cover of Scott Gerber’s first book, Never Get a “Real” Job: How to Dump Your Boss, Build a Business, and Not Go Broke, has two hands making air quotes around the word “Real.” That gives you an insight into the tone of the book.

Gerber has the credentials to write a book like Real Job—as a young but experienced entrepreneur, the author has been associated with a number of successful startups such as Gerber Enterprises and Sizzle It! This, in turn, allowed him to be a popular speaker on the topic of entrepreneurship, where he further developed his insight and voice.

Which is too bad, because Real Job does manage to find its footing and present itself in a more traditional startup advice with simple but sage advice, such as establishing a burn rate in order to establish a “life burn rate,” which is the basic monthly income necessary to survive. Gerber also stresses that it’s often hard work and dogged perseverance and not a well-formatted business plan that’s of paramount importance in foretelling a company’s success or failure.

More practically, Gerber offers up a number of useful online sites and tools to simplify many common but tedious tasks via breakout boxes with titles such as “Eight Tools to Cut your Bills, Save Your Monday, and Keep Your Finances On Track” and “Six Resources to Supercharge your Customer Service.”

These are all positive point but there really isn’t anything groundbreaking or new in Gerber’s book, although it’s a decent book on entrepreneurship. In fact, Real Job follows similar publications such as the recent ReWork and Effortless Entrepreneur; however, it’s far more like the latter than the former, which is not necessarily a compliment.

And therein lies the major issue with the book: the few nuggets of information Never Get a “Real” Job: How to Dump Your Boss, Build a Business, and Not Go Broke offers does not seem to be worth the time commitment necessary to slog through Gerber’s heavy-handed writing style. This is especially true when there are so many other, better written publications on the subject matter.