Never Anyone But You: A Novel 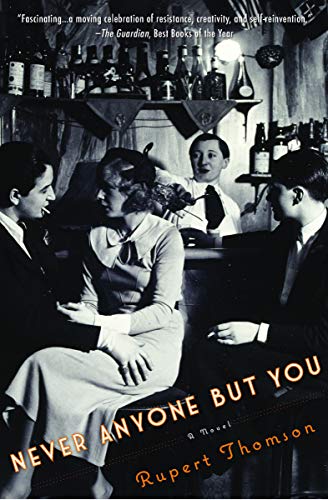 “powerful raw material . . . stunningly beautiful prose. [But] it’s a shame that Thomson’s gifts and these women’s lives were not put to better use.”

Rupert Thomson has written a novel based on the lives of two women whose lives spanned much of the 20th century: Suzanne Malherbe, who serves as the novel’s narrator, and her lifelong companion, stepsister, and lover, Lucie Schwob, who adopted the male name, Claude Cahun. Their fascinating lives included being in Paris in the years between the wars, mingling with the members of the Surrealist movement, and then retreating to Jersey, where they spread anti-Nazi propaganda during World War II.

Though the material is interesting, the novel is a disappointment. Some of this may be attributable to Thomson’s choice of Suzanne as narrator. As envisioned by Thomson, Suzanne lists events, but doesn’t seem to have any sense of what is and isn’t significant. Consequently, we know about an exotic outfit someone wore to a party, but we are constantly learning after the fact about more substantive incidents that were not portrayed in real time, and the rear-view descriptions leave much to be desired.

Suzanne’s brother tells the family that a man has been writing love poetry to her, but we never see the poetry, and wouldn’t know of it, except for her brother’s remark. Claude’s father divorces his wife in order to marry Suzanne’s mother, but neither Suzanne nor Claude know this is happening—even though all of the principal parties live in the same apartment building—until Suzanne’s mother tells her the divorce has already happened. Claude performs in plays by Pierre Albert-Birot, but we never see her doing so, and only hear about it after she has decided to stop. When the second world war breaks out, Claude comments that her father had written editorials many years earlier warning about the dangers posed by the Nazis, but we had never seen him writing, nor did we read excerpts, nor did we hear him discuss his fears.

The portion of the novel covering the years Suzanne and Claude spend in Paris is the most unsatisfactory part of the book. Dozens of writers, performers, and artists make an appearance, but most of their appearances are brief and inconsequential. A man is seen in the next room; Suzanne and Claude do not speak to him, and after he is gone, they learn that he was Ernest Hemingway. One night, Suzanne decides to pay a visit to Gertrude Stein, “only to be told by her melancholy lover, the one with the drooping eyelids and the weighty metal earrings, that Gertrude was working and couldn’t be disturbed.”

Salvador Dali warrants a scene in which he actually speaks, but most of what he says concerns his delight with his new cologne. He invites Suzanne and Claude to visit him, but they never go. We’re supposed to believe that Suzanne and Claude have a fairly close relationship with André Breton, but scenes including him are few, and not particularly memorable. The novel contains a veritable Who’s Who of literary and artistic Paris, yet they rarely discuss writing or art.

When they do, the reports are often vague and indirect, as when Suzanne tells us that Claude and the poet, Henri Michaux, “had talked for hours, uncovering all kinds of common ground. They shared a propensity for what Michaux called ‘delicious isolation’; there were things they had both dispensed with, or had learned to live without.” Is it too much to ask for some specifics?

The strongest part of Never Anyone But You concerns the years of the Second World War. Suzanne and Claude, wearied by Paris, have retreated to Jersey, where they more or less go back into the closet, using their convenient status as stepsisters to conceal the fact that they are lesbian lovers. The Nazis invade the island. Suzanne and Claude retaliate by hiding a prisoner who escaped from a labor camp, and by secretly writing and distributing anti-Nazi pamphlets. The women are captured, imprisoned, and sentenced to death. Fortunately, the war ends before their sentence is carried out.

In his depiction of the war years, Thomson is at his best, writing a suspenseful, gripping story of two lone women actively fighting back against the Nazis. This should have been the focus of the book. Instead, it only accounts for about a quarter of the novel’s length and is followed by a far too lengthy denouement, during which Claude and Suzanne, living in poor health, reduced circumstances, and social isolation, take a decades’ long walk toward the graveyard.

It’s the duty of a biographer to cover a subject’s life from beginning to end.  Unfortunately, it is rare for lives to have a sustained narrative arc. Novelists are therefore free to select, edit, and invent, in order to create the best possible story. In the lives of Suzanne Malherbe and Claude Cahun, Rupert Thomson has powerful raw material, and he is capable of stunningly beautiful prose. Unfortunately, in trying to cover every famous person these women ever met (or almost met), and every interesting or potentially interesting thing they ever did, Never Anyone but You has become less of a narrative than it is a lengthy, sparsely detailed catalog. It’s a shame that Thomson’s gifts and these women’s lives were not put to better use.