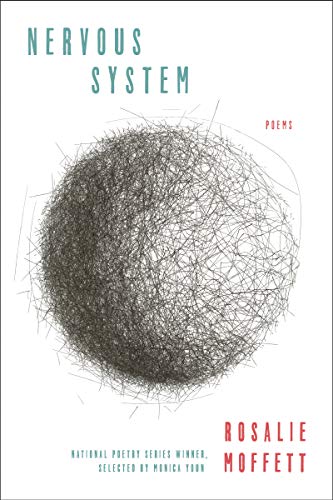 “these are heady themes, but Moffett handles them with a sure hand, managing the magic, directing its music.”

Nervous System by Rosalie Moffett was selected by poet Monica Youn as the winner of this year’s National Poetry Series, so, of course, it’s a poetry book. The words in its pages use imagery and sound from line breaks as it should be used in poetry, so that’s it, right? Take a read of these lines from the book’s opening poem, “What the Mind Makes:”

on the room where she’s been

hair loose around her face, her

a quiet brain full of song. My camera

and my memory grows, rising dough, it self-

out to include in the frame the necklace

of cars fleeing the storm,

child-me asleep in one glinting bead.

themselves in the folder with the others

Well, okay. It’s definitely poetry. Even great poetry. But it may also be something else. After this first poem, the rest of the book is one long chapter that reads strongly, compellingly, like memoir, if memoirs were written as magical realism (as perhaps they should be).

The theme of the mother, of childhood, the two fused by the narrator’s memory, liberated by the imagery of the natural world made magical with beauty and order and color, that world’s order also inspired, guided by another mother of sorts: the spider as its recurring symbol, its presence a mystery the author does not leave unanswered. Italics in the verses below, hers.

“can block. To dream you’re bitten by a spider

with your mother—but think of the dream,

the idea of a spider

the brain waves like a flare, a little request

for venom, a little

which held my self, idea

So, perhaps it is a memoir. Or maybe a fictional story: a woman watches over her mother in the hospital and, as she watches, she remembers, running after each memory before their source disappears, and in this way, perhaps, it is not only story, memoir, poetry, but also rescue mission. But of whom? Of the mother? Of the self? Of their mental sanity?

“aloud in the room where I found the black widow,

trapped between the window

and the screen. Not sure how to kill her

or let her go,

I left her there. Nothing at all

to prey on, slim ambit

of movement, I marvel

A musical mystery. Yep. That’s what this is. A mystery with clues strewn, hidden in the beautiful excess of verse. Every line seasoned with longing, for who faced with the loss of a mother, doesn’t yearn even for those things that used to annoy?

And granted, these are heady themes, but Moffett handles them with a sure hand, managing the magic, directing its music. That her talent for stretching poetry beyond its limits results in her giving us many books in one is all just an added benefit, and one that given the poetic essence that is all there (music, form, imagery, emotional weight, and mastery of verse) is just one more thing making this a poetry book of the best kind.