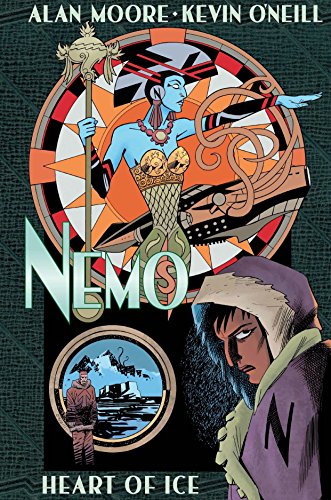 Author Alan Moore and artist Kevin O’Neill have delivered a fitting story to add to the League of Extraordinary Gentlemen (LOEG) series with this one-off offering of Nemo: Heart of Ice.

Fifteen years after the death of her father Captain Nemo, Captain Janni Dakkar decides that after more than a decade of plundering and pillaging she is finally ready for something more and embarks on a journey to both reconcile her father’s legacy and step out from under its shadow.

Accompanying Janni on her journey are her father’s right hand man Ishmael, and former crewmember Broad Arrow Jack, who are both able to help Janni follow her father’s footstep to Antarctica—where he exiled himself after the disappointment of his wife delivering a daughter instead of the desired son.

With a brief stop in Metapatagonia where legends of the talking animals are put to rest, Janni is soon made aware of pursuers hot on her heels. Traversing the Arctic plain to the Mountains of Madness and the Kingdom of Yuggoth, Janni lays a trap for her oppressors they will never comprehend.

As typical in the LOEG series, the literary and pop cultural references fly fast and furious. So if you are not brushed up on your Lovecraft and Welles or the history of the Industrial Golden Age you are going to be missing at least 60% of the story.

Nemo: Heart of Ice will still be enjoyable, but the key to enjoying Alan Moore’s writing is to admire the way the spider crafts its web: It is in the layering and the callbacks that author Moore has devised an adventure story that also shows a woman’s emotional maturing, calls out oligarchs in the Industrial Age, comments on our current military industrial complex, and brings all of these themes together in a way that transcends the adventure genre.

This can be stated of much of Mr. Moore’s writing, but when partnered with artist Kevin O’Neill the entire effort ascends new heights. Without a glancing knowledge of the reference points, you’ll reading a much simpler story, but this is writing meant to both entertain the reader and expand horizons.

Mr. Moore had previously stated that he and artist Kevin O’Neill were interested in continuing the LOEG series in the form of shorter one-off stories; and one can logically assume this is the first of those tales.

Artist O’Neill is able to provide the visual momentum that propels the reader through plot exposition and is deft enough to slowly pull us in to find the tip o’ the hat details hidden among a plethora of explosions.

In the backgrounds of Kevin O’Neill’s panels are familiar faces and his sharp, tight brushwork has become his signature style. The only drawback here is that one cannot get the true measure of O’Neill’s artwork from a small e-reader or smartphone. A digital copy of this title is best read on a tablet to truly appreciate the illustrations without losing the detail.

Adding another layer of interest to this tale of a girl struggling to make a name for herself in the shadow of a revered, feared, and sometimes reviled father, we note that Alan Moore’s daughter, Leah Moore, has been finding her own success in the comics industry with Doctor Who: The Whispering Gallery, The Complete Alice in Wonderland, as well as various Sherlock Holmes titles.

And in the larger literary market we are seeing more similar instances in which the children of known writers—such as writer Joe Hill (son of author Stephen King) and writer Max Landis (son of writer/director John Landis)—striking out on their own in the same métier as their parents. As with our heroine in Nemo: Heart of Ice, these writers are in a unique position, most likely constantly self-evaluating strengths and weaknesses to counter speculation that their successes are not truly their own.

There comes a time when the daughter or son must replace the parent. This layering of the psychological atop a solid plot makes Nemo: Heart of Ice a thoroughly immersive experience.