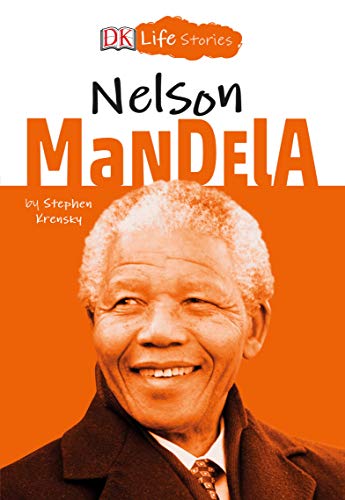 Stephen Krensky's biography of Nelson Mandela outlines how a boy whose name, Rolihlahla, meaning “troublemaker,” grows up to be a fighter for the rights of black South Africans and the country's first black president.

Krensky provides a lot of background, explaining things such as how a krall is a small farm. Basic vocabulary is defined, from “magistrate” to “sabotage.” Other basic bits of information, however, are left out. What tribe did Mandela belong to? What language did he first speak? We're told that Rolihlahla means troublemaker but not in what language.

We're introduced to Mandela's mother and told that she was one of four wives, with Mandela an only child (at least that's the assumption since no siblings are mentioned), but the relationship Mandela might have had with the other wives and his half-siblings isn't described. The back cover mentions Mandela winning the Nobel Peace Prize, but the text of the book omits this important honor entirely, including it only in the timeline in the backmatter.

The book provides an odd jumble, giving a lot of information about some things, skipping others entirely. Obviously a writer has to choose what to include in a biography. An entire life cannot be crammed into so few pages, but the choices here don't always make sense. We read that Mandela dropped out of law school only to discover a few pages later that he co-founded a law practice. How could he practice law without a degree?

There are wonderful details about Mandela's first use of a fork, shoes, and pants, the kind of descriptions that make a biography vivid. Less clear, though, are the descriptions of Mandela's non-violent protests. What exactly did he do? DId he know about Gandhi, an inspiration for using non-violent means to attack colonizers and oppressive, racist governments? What exactly were the charges that led to his 27-year imprisonment?

All Krensky tells us is “He was captured in August 1962 and accused of various crimes against the state. At his trial he did not really defend himself. (He actually agreed that he was guilty of the charges.)” Which only makes the reader wonder all the more what the accusations were. Krensky goes on to say, “the next year he was found to be connected to other illegal activities against the government. The charges were serious. Once more he was accused of sabotage.”

How were the later charges more “serious” than the earlier ones? What was he accused of besides sabotage? And, most importantly, what was the act (or acts) of sabotage exactly?

Showing Mandela's “crimes” would have been a dramatic way of making clear the personal risks he took to bring justice to black South Africans, the bridges he tried to build between blacks and whites. Instead, what could have been the focus of the book is hinted at, never described.

Mandela's accomplishments were enormous, but it's difficult to get a real sense of them from a text that skims over his life rather than putting the reader there with him as he experienced it. The strongest parts are the quotes from Mandela's own writing and the careful way Krensky provides context despite the gaps mentioned earlier. Younger readers may find this an accessible entry level story that prods them to read more challenging books about Mandela. Older readers should go right to Mandela's own writings.