The Neighbors Are Watching: A Novel 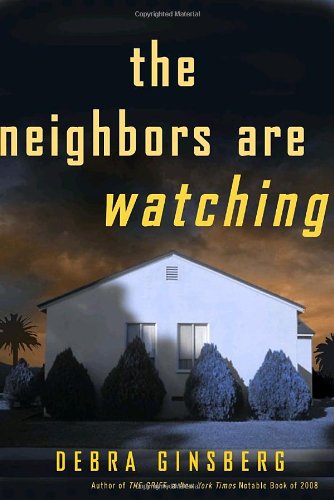 “It was as if Gloria was sabotaging herself, Sam thought. Well, they were both sabotaging themselves, just going about it from opposite directions.”

Debra Ginsberg has populated her latest novel with a score of self-sabotaging and dysfunctional characters. This is the story of Diana, a young pregnant woman who is thrown out of her mother’s home and forced to live with the father she’s never met. Dad Joe lives in the suburbs of San Diego near the ocean with his second wife, Allison. Joe made Allison abort her only pregnancy years earlier, and Allison knows nothing about the existence of Diana. Therefore, when she appears on Joe’s driveway the marriage is suddenly in serious trouble.

But it turns out that everyone in the neighborhood is in trouble as the fires of late October and early November 2007 approach. Fourteen people died and at least 70 were injured when a half-million acres burned. One million San Diego County residents were evacuated, the largest evacuation in California’s history. This is the not-so-pleasant backdrop for Ginsberg’s troubled tale.

It appears that all of the neighbors in Joe’s suburban community have their serious quirks and issues. There’s a sometimes happy and sometimes bickering lesbian couple, Sam and Gloria; and a heterosexual married couple, the Werners, whose son Kevin is a lazy weed smoker with no intellectual or athletic skills. This is a ‘hood that is seemingly over-populated with drug users and abusers. One has to wonder how accurate a reflection this is of America’s Finest City and its residents.

The single exception to the group of losers is an Asian couple, whose quiet son shoots hoops and practices the piano for hours on end. This is a stereotype of sorts, although it’s one that was likely not meant to be offensive. However, Ginsberg includes a highly troubling reference to Diana, who happens to be half African American. Early on, Kevin’s mother refers to Diana as “an uppity pregnant girl who had no business even being in the neighborhood in the first place.” This is offensive on two counts—first, in using a term that is knowingly offensive to African Americans, and also in the implication that there’s a “place” within which people of a certain color are not welcome.

Perhaps Ginsberg intended this non-P.C. reference to serve as a reminder of the destructiveness of racism, but she could and should have adopted a more subtle and temperate way of expressing that notion. Another flaw with the telling is that Ginsberg chooses the rather unfortunate name of Joe Montana for Diana’s father, which makes it seem like some type of inside joke. “Joe Montana, like the football player?” Yes.

One of the key problems with Neighbors is that the story’s made needlessly complex. When Diana surfaces with disastrous consequences for her father’s and stepmother’s marriage, the storyline seems logical. But then Ginsberg takes it further: Joe suddenly has an affair with a young neighbor and Diana hooks-up with Kevin, the worst possible choice for her. More is not always better.

There’s this dividing line . . . a dividing line between the fictional account which to a reader feels like real life, and the feeling that it’s a good effort but there’s a sense of magic that’s lacking. Ginsberg has produced a fine attempt in this novel, but it struck me as a manuscript rather than as a fully developed work. It needed some editing, trimming, and rethinking. All in all, the author seemed to be sabotaging herself like the characters in her dysfunctional fictional neighborhood.