Need to Know: A Novel 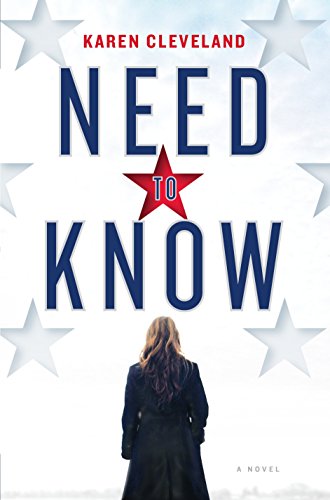 Need to Know is Karen Cleveland’s first novel. Written while on maternity leave from the CIA, where she worked as an analyst, it was snapped up by a literary agent, sold after a “heated” auction in the United States and to more than 25 international publishers, and grabbed by Universal as a pending Charlize Theron project.

Kind of puts an awful lot of pressure on us to like the book, doesn’t it?

The story’s very straightforward. Vivian Miller is a counterintelligence analyst for the CIA, a rising star who’s been developing a system for identifying Russian agents deeply buried in America as sleeper spies. When she’s able to use the new program to access the computer of a suspected Russian operative, she discovers evidence that threatens to destroy her family, her marriage, and her career. Who can she trust to help her solve the impossible situation into which she has been thrust?

Debut authors are often influenced by other material already out there, and Cleveland’s no exception. “My husband’s suddenly a stranger to me” is a well-worked theme that continues to be popular with readers, and Cleveland makes good use of it here.

Perhaps more significantly, Need to Know is highly derivative of The Americans, the hit television series created by Joe Weisberg for the FX network, in which a normal-looking American couple are in fact Russian sleeper agents working hard to protect the Motherland from within the United States.

The problems with this novel compound from there. Vivian handles the Russia desk for the CIA, but she doesn’t understand Russian. Perhaps this is plausible, since the real-world CIA website lists foreign language proficiency as “desirable” for qualifying analyst candidates, but it undermines our confidence in her ability to deal first hand with Russian intelligence just a tiny little bit.

The primary skill the actual CIA looks for in its analysts is high-level problem-solving, and here Vivian falls far, far short. As her world suddenly implodes, she spends the entire first half of the novel running around like a supermarket mom who has lost her purse. She shows no evidence of training, no analytical abilities, no problem-solving skills, and no signs of the professional experience that has propelled her forward in her career to this point. She makes one cringe-worthy decision after another.

“How could I be so naive?” she asks herself at one point. “I’m a CI analyst, for God’s sake.” Putting into words what we’re all thinking.

Midway through the novel, as though someone holds a vial of smelling salts under her nose, she apparently snaps out of it and vows to fight back. Great. Visions of Private Vasquez dance in our heads, slamming a magazine into her smartgun. Let’s rock!

Trouble is, she can’t accept that her husband’s betrayal is what it seems to be, and she continually looks to him and to Omar, her male counterpart with the FBI, for help to escape the mess her decisions have created. She takes a few steps forward, then flounders around a little more. As female protagonists go, Vivian Miller is not Jenette Vasquez, and she’s definitely not Ellen Ripley. Her desire to protect her children unfortunately creates vulnerability, not strength.

Whether or not you enjoy this novel will depend on what kind of fiction meets your taste. Need to Know will appeal to a readership that favors romance novels and domestic suspense. The overwhelming amount of time spent with her husband and children at the breakfast table, or driving to school, or at bedtime, the constant flashbacks to engagement, early marriage, and the births of the children, and the relentless description of Vivian’s state of mind, which goes up, down, and sideways until you want to scream, make this a story that won’t appeal to some readers but will find its fans, nevertheless.

If you’re looking for good espionage fiction, though, particularly something that measures up to the excellent writing found in The Americans, Need to Know is a novel you don’t really need to know about after all.