The Neanderthals Rediscovered: How Modern Science Is Rewriting Their Story 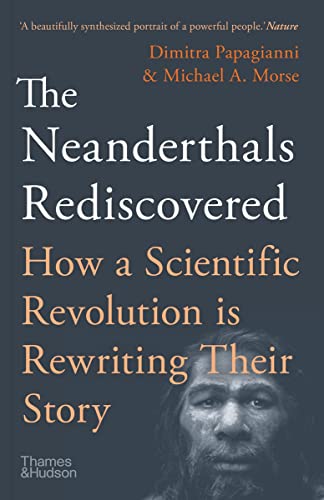 “Neanderthals belong to a distant past of hundreds of thousands of years but studying them is a rapidly developing race to the future of scientific exploration. Papagianni and Morse tell the history of each in The Neanderthals Rediscovered.”

Dimitra Papagianni and Michael A. Morse point out that Neanderthals “is one of the greatest stories from the prehistoric past.” “They are closely related to us, yet distinct in both body and mind.” For thousands of years, our Cro-Magnon ancestors and the Neanderthals “lived in some of the same places” as contemporaries. We all carry some Neanderthal DNA but they carry none from we Homo sapiens.

“Modern technology enables us to ask questions that we could not have even imagined asking only a few years ago.” Now, every year new discoveries about Neanderthals make news. “Neanderthal extinction has become a media staple, an irresistible story where every new piece of evidence, however small, gets magnified, as a possible final answer to the age-old question.” The mystery of Neanderthal extinction deepens, however.

Breakthrough research using such tools as carbon analysis and DNA at the Max Planck Institute of Evolutionary Anthropology and other institutions even provides insights for our future encounters with intelligent life. This journey opens new means of exploring our past but also in understanding ourselves.

Much about basic anthropology comes from the study of the remains of ancient humans. Understanding Neanderthals comes from evidence from the bones of the humans who came before and after they developed. Anatomy in the study of evolution is an example. The human species in the distant past had far greater differences in size between males and females than we do today.

Stereotypes of the “cave men” make them out as crude and stupid. Neanderthals “have always been a little too close for comfort for the modern Western world.” The authors of The Neanderthals Rediscovered find that image inaccurate and unfair.

The Neanderthals “buried their dead, cared for the disabled, hunted animals in their prime, used a form of spoken language.” They also used fire, developed the hand-axe independently, and wore clothes, with all that implies. Neanderthals did the complex planning required to drive large animals such as mastodons over cliffs as an efficient way to kill for food. Their remains have turned up from Wales to Siberia.

Neanderthals belong to a distant past of hundreds of thousands of years but studying them is a rapidly developing race to the future of scientific exploration. Papagianni and Morse tell the history of each in The Neanderthals Rediscovered. “We know how this story ends, for it is we who are telling it.”

The Neanderthals Rediscovered parallels the history of this species with the history of their modern discovery, beginning with the first uncovering of their remains in the Neander Valley of Germany in 1856. Scientists have steadily advanced this study of that branch of humanity’s close kin for over 150 years. Later archaeology found many more sites as new scientific techniques gained more information from the bones and tools uncovered.

“Neanderthals lingered on the edges of the edge of the human evolutionary story” even with, over time, the discovery of more than 20 other species of extinct prehistoric humanoids. Climate and geography surely created so many different species of these of our close relations but also led to their extinctions. “We are now the sole survivors in what used to be a diverse human world.”

Our Cro-Magnon forbearers and the Neanderthals finally met, perhaps influencing stories passed down for thousands of years, as both species spread into Asia. “At the time, there were [still] perhaps five or six different types of humans.”

The authors write that “in every chapter of this book, there are questions to which we do not have definitive answers.” Debate, for example, continues on which humanoids first colonized Europe, some 500,000 years before even the appearance of Neanderthals.

Answers to the growing number of questions come from sites across the Old World. Problems come because what survives come from special geological circumstances and the remains that scientists then happen upon.

The thread of discovery centers around those sites. A comprehensive collection of data, for example, implies that humans progressed in technology very little beyond the stone hand-axe for 1.5 million years! Innovation first begins to appear only 400,000 years ago as shown by remains found in sites in France.

Papagianni and Morse offer ideas in a well-written tome designed to tell its twin histories in a basic but thorough manner for the reader not familiar with the subject. The authors cover much in a concise volume. No problems here with technical jargon that requires a special scientific background but a good read. The authors share their extensive knowledge, raise questions, and debate answers in a most collegial way.

The Neanderthals Rediscovered has illustrations, many in color, and a bibliography.