The Nazi Conspiracy: The Secret Plot to Kill Roosevelt, Stalin, and Churchill 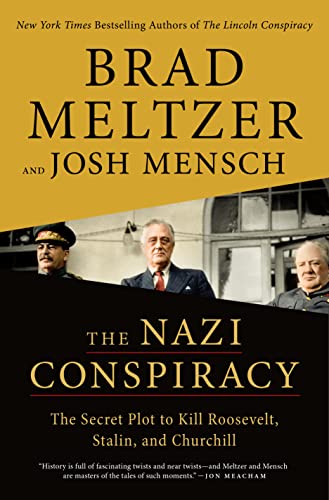 “Meltzer and Mensch, in The Nazi Conspiracy: The Secret Plot to Kill Roosevelt, Stalin, and Churchill, give history a sheen of drama that it deserves while leaving the reader much to consider.”

World War II was a conflict built around personality-based leadership from Mussolini to the Emperor of Japan. Following these leaders reached cult status. Scholars debate how the war could have been different without the leadership of Winston Churchill, Franklin Roosevelt, or Joseph Stalin.

Brad Meltzer and Josh Mensch, in The Nazi Conspiracy, explore an attempt to change the outcome of World War II by assassination. Leaders of the time surely remembered that the First World War began with the killings of the Sultan of the Ottoman Empire and Arch-Duke Ferdinand of the Austro-Hungarian Empire. Franklin Roosevelt survived two different assassination attempts even before he became president.

Consequences went far beyond simply the absence of certain powerful individuals. Removing leaders could throw a country into a crisis and, as in the Tehran Conference, could change the policy of the sometimes conflicted Allied alliance against the fascist nations. In that instance, it would have made the discussions of the American and British invasion of France in 1944 even more difficult.

Contrary to the title, much of this engrossing storytelling has nothing to do with the assassination of anyone. The story does center, however, on the opportunity presented to the Germans to kill Allied leaders Churchill, Roosevelt, and Stalin when they met in person in Tehran in November 1943. That these men had to meet in person, as explained in the book, had much to do with their mutual distrust of one another.

This popular novelist and television personality on historic American buildings, Brad Meltzer now writes what Truman Capote termed as nonfiction novels, in cooperation with documentarian Josh Mensch. This work brings in the literary devices found in good fiction, including atmosphere, description, personality, and readability, but within the limitation of staying with historical facts.

The Nazi Conspiracy, in the tradition of nonfiction history, ends with the issue of whether the Nazi plot to kidnap or murder the big three really existed. In almost the last chapter, the authors present their own analysis and theory.

This style of writing must be entertaining, not a lecture. In The Nazi Conspiracy, the reader has to read it like a novel because it is NOT a chronological account that argues for some important points. For the reader wanting the history, this book’s organization can be confusing. Readers of fiction will also require patience to keep the storyline straight.

The Nazi Conspiracy has no real descriptive overview or summary in the form of an introduction, historical contexts, or conclusions found in standard historical nonfiction works.

The story is alternatively told in pieces in Algeria, Germany, Iran, and elsewhere that finally assemble for an ending. Suspense builds as the respective characters appear to head toward a typical Hollywood ending, but instead the readers must decide how much of the plot really happened!

The basic story would make an engrossing motion picture in the tradition of The Eagle Has Landed (1976) if, in typical movie fashion, the facts are suspended for the sake of a good and comprehensible simplistic story that this book is not. The Nazi Conspiracy is nonfiction!

Meltzer and Mensch, in The Nazi Conspiracy: The Secret Plot to Kill Roosevelt, Stalin, and Churchill give history a sheen of drama that it deserves while leaving the reader with much to consider. The authors retell much material that is well-known in public history.

The Nazi Conspiracy is documented but scholars will find little value in their academic research. It does include annotation, a bibliography, and illustrations, however.