The Naughty Nineties: The Triumph of the American Libido 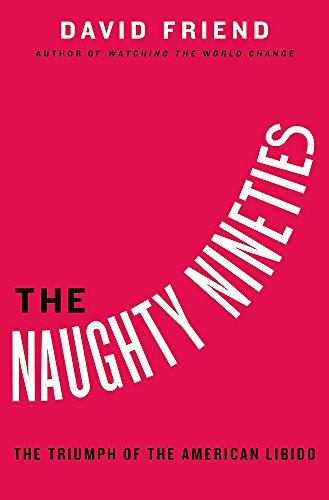 Yes, the 1990s was oh-so naughty, and David Friend has a grand time telling this romp of a tale in his new book, The Naughty Nineties. It is a very complex, rollicking story, particularly in term of sexual culture.

Friend writes in a brisk, upbeat style, one shaped by an oh-wow sense of discovery. He is the captain of a ship of intellectual adventure. Together with his crew of research associates, he’s pulled together an exhaustive, ever-detailed review of America’s sexual culture during the Clinton era. The book demonstrates the complexity and conflict that shaped the nation’s sexual culture during the tumultuous ’90s.

Friend’s calls his core thesis, the “Demi Moore Law,” a take-off on the “law” proposed by Gordon Moore, a founder of Intel, linking the rate of digital signal processing to the decline in price. Friend’s tongue-in-cheek revisions is simple: “I call it Demi Moore’s law. (Apologies to Demi.) This holds that every five to ten years the quantity and tolerability of sexually suggestive content in the culture increase exponentially—in inverse relation to its cost.” Yet, he cautions, “consumers have not yet reached their sexual saturation point despite an overabundance of stimuli.”

The book is organized into 30 chapters, each a bitesize snapshot of a specific sex-related issue. They cover everything from Bill Clinton’s affairs with Gennifer Flowers and Monica Lewinsky to his impeachment as well as the first Brazilian bikini waxing, the introduction of Viagra and almost anything that took place during the decade. Adding texture to the dominant political narrative, the author offers tidbits of supporting information about an endlessly assortment of TV shows, news reports, movies, music and Internet sites (especially with regard to pornography) to reinforce the vital role played by sexual culture in American life. All fashioning an almost-Surrealist sense of an intriguing period.

Friend is a Vogue editor and author of Watching the World Change: The Stories Behind the Images of 9/11 and other works. His new book draws upon some 260 interviews and an impressive research team to gather engaging—and neverending—quotes and footnotes that substantiate or qualify the story he tells. One of the benefits of this scholarship is that the readers learns of origin of such descriptive terms of the era like “metrosexual” and “man cave,” among many others.

Unfortunately, after some 600 pages, the author seems unable to make sense of all he’s so carefully reported. He seems unsure as to what it all really means and where things go from here in terms of the nation’s politics and sexual culture.

After amassing a treasure trove of information about the ’90s, Friend fails to offer a coherent assessment of all he’s put forth. He seems—analytically speaking—overwhelmed by the amount of information presented; too much of a good thing can be too much. He offers no final assessment of the Clinton era, nor the long-term or historical significance of the changes in American sexual culture that occurred during the tumultuous ’90s. His conclusion artfully jumps a quarter-century forward to today and offers a rather conventional assessment of Donald Trump’s election.

The Naughty Nineties’ most consequential shortcoming is its failure to seriously consider the place of HIV/AIDS in ’90s sexual culture. For example, in New York City between 1981 and 2004 over 190,000 individuals were diagnosed with HIV/AIDS and approximately 90,000 died. Since AIDS/HIV was first diagnosed in 1981, 1.7 million Americans are estimated to have been infected, including over 619,000 who died. It’s one of the gravest “natural” disasters New York—and the nation—ever faced. Remarkably, while AIDS was a shadow hovering in the background, the ’90s spawned an insurgent sexual culture that the author ignores.

Friend invites readers into his tale by writing in both a first-person and a third-person voice; he often speaks as “I,” “me,” “we,” and “my friend.” The book is very much a mainstream “liberal” analysis, drawing extensively on the opinions of establishment writers, scholars, and others like Frank Rich and Joel Klein. The author never wanders too far off the acceptable or “mainstream” path, never asking who was pushing for the profound changes he documents?

Friend’s reading of ’90s sexual history leads to a sense that everything that took place was of equal measure, with the same historical significance. But isn’t history really the story of the cutting edge, those motivated by radical impulses and activities who pushed the boundaries that made the moderate, popular expressions possible?

Nor does he acknowledge the role of, for example, Susan Colvin (of CalExotics), Ron Braverman (Doc Johnson), and others who founded the Adult Novelties Manufactures Expo (ANME) in 1996, a key step in the mainstreaming of sex toys, rebranded into the $15 billion “sexual wellness” industry with Amazon the biggest retailer.

Equally troubling, the book does not assess the sexual confrontations of 1990s against earlier “naughty” eras. While offering passing nods to the counterculture of the 1960s–70s, it fails to acknowledge culture wars during the fin de siècle, culminating in the Roaring ’20s, and during the Second Awakening, culminating in the Civil War. Lacking historical context, an era like the ’90s becomes just one more passing expression of celebrity culture.

It must be very challenging to write a “popular” study, one that has potential mass market appeal, be it a history, biography, political analysis, or social commentary. To gain broad popularity, big ideas have to be transformed into bitesize morsels, a compelling story with a lesson, something to remind the reader as to why this specific bit of information is important, meaningful. Friend’s new book partially succeeds in meeting this difficult challenge.