Nature's Mutiny: How the Little Ice Age of the Long Seventeenth Century Transformed the West and Shaped the Present 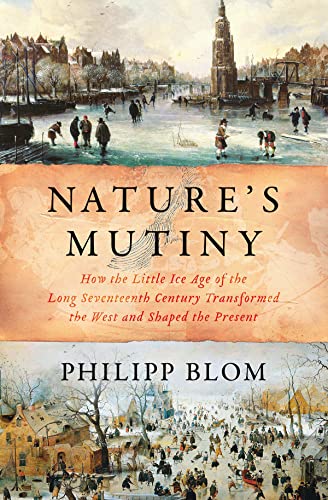 “this engaging, well-written book is must reading for anyone who thinks climate change is just about the weather.”

Nature’s Mutiny is a delightful book about a dangerous and deadly time. Phillip Blom’s examination of the 17th century’s Little Ice Age (LIA) of rising temperatures and brutal cold is as much a story of the rise of knowledge as the chaos weather can inflict on culture.

While the LIA was a global phenomenon, Blum focuses his attention on Europe, which in the late 1500s was feudal, agrarian (typically relying on a small number of locally grown grain crops) and ruled by religion as much as by monarchs.

As the weather turned colder, the winters become icier and longer, and the summers drier and dimmer. Rivers froze, crops failed, and people rioted or were forced to migrate in search of food as famine became commonplace. Europeans turned first to religion for explanation and relief. Neither prayers and calls for repentance, nor the cruelty of so-called witches tortured and burned at the stake changed the unrelenting cold and the unending terror it caused.

What changed, instead, was how Europeans came to understand the world and humanity’s place in it. Survival meant changes in agriculture and trade. Survival meant weakening religion’s tyranny over mind and spirit through the first steps toward empirical observation and the scientific method. It meant replacing the old feudal system with capitalism, which benefitted a newly forming and educated middle class but conscripted agrarian peasants into the new working class or the poor.

These changes and many others, often haphazard responses to opportunities, led to the cruelties and glories of the Enlightenment, with its tolerance of slavery alongside still stirring calls for freedom, dignity, human rights, and the rule of law.

Blom covers vast ground for a book of this length. It’s easy to lose track of all the changes in warfare, the natural sciences, the humanities and visual arts, literacy, and philosophy, to name a few of the topics explored. Blom circles back just enough to remind readers of the broad patterns but not so much as to be repetitive. Through it all, Blom juxtaposes a detached and scholarly eye with a compassionate vision to show how lives changed for better or worse.

The world as know it today grew out of the Enlightenment, and so Blom dedicates the last chapter to a critical analysis of its ideas and ongoing impact on market economies. Here Blom becomes pessimistic and somewhat polemic about the future as we grapple with a new era of widespread climate changes.

While it’s not clear what caused the 17th century’s LIA, there’s no doubt that human activity is the cause of 21st century’s climate change that’s inflicting havoc on the environment and ruining countless lives and species. Yet it’s impossible to read Nature’s Mutiny without a paradoxical sense of hope. If the past is any clue to the present, we may yet face our current climate change with new ideas, new technologies, and new futures.

Little wonder this engaging, well-written book is must reading for anyone who thinks climate change is just about the weather.