Natural Causes: An Epidemic of Wellness, the Certainty of Dying, and Killing Ourselves to Live Longer 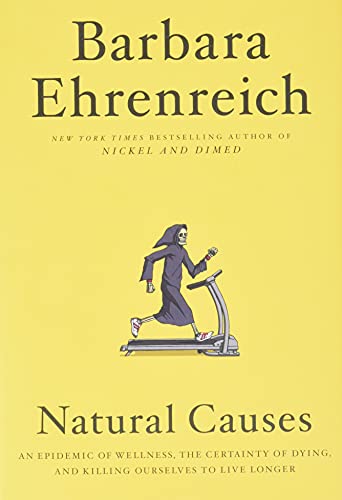 Over the past five decades, leftist muckraker Barbara Ehrenreich has carved out a niche for herself as one of the nation’s most acidic and trenchant social critics.  Fortunately, she is also among the most intellectually curious and entertaining, asking all the hard questions and recording the answers with wry chagrin. A comparison to H. L. Mencken might prove in order—if Mencken had held a Ph.D. in immunology, given birth to two children, and championed democratic socialism.

Her best-known earlier works include Nickle and Dimed (2001), an immersive exposé of working class hardship, and Bright-sided (2009), a send-up of the “positive thinking” craze.  In Natural Causes, she brandishes her stiletto against the body of evidence behind the contemporary wellness movement and leaves a rather bloodied carcass in her wake.

The central tenet underlying Ehrenreich’s contrarian analysis of everything from the annual medical checkup to corporate-sponsored meditation is universal mortality. Not that Ehrenreich is the first observer to note that we are all going to die—readers might find hints of this augury in the poetry of Philip Larkin or old recordings of Lenny Bruce. Rather, starting with this premise, Natural Causes interrogates the many illogical and unscientific practices embraced by western society to forestall or even defeat impending death.

The sharpest and most persuasive of Ehrenreich’s critiques dissects the twin fad of excessive exercise and so-called “mindfulness” that have enveloped this nation’s professional and managerial classes in the past several decades.

She ties both to the collapse of the communal spirit of the 1960s counterculture as, by the 1980s, “[s]elf-help books proliferated to the point where they became a separate literary genre” and “a fashionable segment of the society had taken up a new project—themselves.”

Vigorous gym-based exercise, for those who can afford it, makes participants feel better and offers the illusion of control.  Yet Ehrenreich notes a “darker” side to the pandemic of would-be CrossFitters:  “[T]he widespread suspicion that if you can’t control your own body, you’re not fit, in any sense, to control anyone else, and in their work lives that is a larger part of what typical gym-goers do.”

Flabbiness, according to Ehrenreich, is associated with limited career advancement, while employees are subjected to “coercive and overly intrusive” wellness programs that actually add to workplace stress.

Efforts to tame the psyche through “mindfulness” appear even more suspect and deleterious than those designed to sculpt the body. The mindfulness cult’s origins may lie in Eastern religion, but these have been channeled through Silicon Valley, whose high-tech firms promote dubious in-house programs like Google’s “Search Inside Yourself” agenda.

Having created devices to distract us endlessly and to disconnect us from meaning, these same firms now pitch apps designed to undo the damage.  Ehrenreich quotes psychologist Daniel Goleman: “What a clever way to make money: Create a problem you can then solve.”

To Ehrenreich, “this is Buddhism sliced up, commodified and drained of all reference to the transcendent.” More important, she points out there is “no evidence for . . . any particularly salubrious effect” of “byte-sized doses” of meditation. Readers are as well off sharing “a glass of wine with friends.”

Studying organic chemistry, a “weed-out course,” or “electron orbitals” does not lead to a better understanding of disease or health. (This reviewer, a physician, can concur: Three attempts at college physics gained him entrée into an elite medical school, but never once has he launched a patient from a cannon and measured the trajectory.)

She targets the annual physical examination—questioning not only its utility, but also challenging proponents like Stanford University’s Abraham Verghese who defend the practice as a ritual “‘that most patients expect.’” She pointedly questions the value of routine screenings like mammography and colonoscopy.

Of note, Ehrenreich now practices what she preaches. The author, who is 76, announces that she will forego future diagnostic and screening tests. She observes that she has “gradually” come to believe that she is “old enough to die”—that the death of a septuagenarian, while unfortunate, is not “tragic.”

The value of Natural Causes lies not in its particular critiques, some of which will likely age better than others. (For now, this reviewer still plans on getting a colonoscopy.) But Ehrenreich has a gift for enabling readers to recognize their own blind spots—to call into question the very foundations of the ordered universe in which many of us believe we live.

She is neither a Luddite nor a Sidney Spritzer-style heckler. Instead, she is an actively engaged critic—the lioness roaring in winter—pointing out our folly in the hope that we may lead richer lives. “The only cure for bad science is more science,” she writes. That, and of course, maybe some whetted barbs from the grandstands.