Native American Almanac: More Than 50,000 Years of the Cultures and Histories of Indigenous Peoples 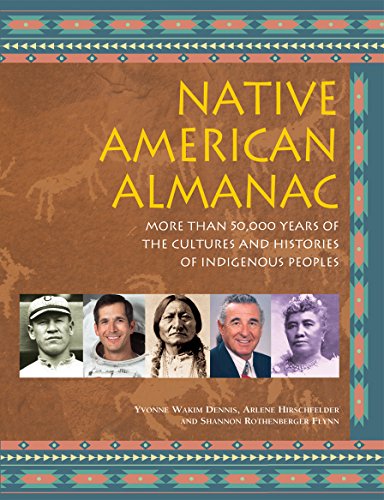 Almanac is an inviting, almost cozy word. For example, The Old Farmer’s Almanac evokes a folksy image of sitting by the fireside planning spring planting. It encourages one to consider the big picture of astronomical and meteorological data for a given year along with a calendar of annual events, while browsing a miscellany of practical information from recipes for corn bread to how to make corn plasters!

Native American Almanac: More Than 50,000 Years of the Cultures and Histories of Indigenous Peoples by Yvonne Wakim Dennis, Arlene Hirschfelder, and Shannon Rothenberger Flynn retains the OFA’s legacy of a comprehensive compendium that can be used to look up something specific or to dip into at random. But it is more in tune with the early Arabic meaning of almanac as “settlement” in that the authors present a sweeping historical overview of Native communities in what is now the United States.

The book started out as an update of an earlier compendium, but most of the material is new yielding one of the most complete single-volume reference books tracing the rich heritage of Amerinds and their stamp on this continent today. From the traumatic upheaval of early encounters between Indigenes and colonizers, through wars, treaties, removals, and other policies of prejudice to contemporary issues of self-determination, this sourcebook provides a wealth of information about all aspects of Native American life.

The authors aim to show how the histories of the United States and Native Americans are intertwined. But the book is not a treatise on the value of First Peoples to the usurper settlers, nor is it a homily on the worth of Native customs and traditions in order to promote cultural revitalization or to push back against racism:

“Rather, we maintain that no matter who writes the history, the nitty gritty is that this place is the homeland of Indigenous peoples, whether they have been here since the beginning of the human species or just 50,000 years and have a right to just ‘be’ without any rationalization for their continued existence.”

Although the coauthors are “insiders” with personal lived experience of the challenges faced by Indigenous peoples today, they are in no way “speaking for” others, nor presenting “A” Native Voice as there have always been myriad voices reflecting the great diversity of “Turtle Island,” as North America was called in the oral history of many tribes.

And although the tone of the book is clearly one of advocacy of “justice for Indigenous peoples, and people’s rights to INDIGENIZE!” it is in no way stridently vituperative, instead presenting the facts and conflicting interpretations in a wry matter-of-fact manner. For example, chapter sections detailing how the U.S. government came to designate a particular Native group as no longer extant are given a subheading such as “How The Montaukett Became Extinct (Not Really).”

A mixture of presentation styles, including photographs, maps, firsthand accounts, mini ethnographies of defining cultural expressions, and reports of current issues encourages the reader to sample the very real diversity masked by the colonizers’ assumption of the melting pot myth of assimilation.

Native American Almanac begins with an historical overview of Indian-white relations in the U.S. from the contested Bering Strait land bridge migration theory to contemporary economic challenges and social movements such as Idle No More, a Canadian-American expression of identity politics protesting further erosion of environmental protections on reservations.

There are 11 regional chapters, including Alaska and Hawaii, plus one on urban living, since not only is urbanity an ancient lifestyle, but also all cities in North America are technically in Indian country and almost eight of every ten Native people live in urban areas. This chapter includes cultures that are from other parts of the hemisphere (such as Garifuna, Maya, Taino, Mixteca), but are Americans, too.

Most chapters set the stage via a narrative history and a bird’s eye view of the challenges to settlement of the physical environs. Then they cover the First Peoples and their cultural highlights, key moments in pre- and post-contact history, the impact of federal policies, key issues around land and environment and short biographies of important figures.

Many of the chapters have a section towards the end with the subheading “tying it up.”

“This refers to Lenape storytellers and their bags, filled with objects to help the storyteller recall details of the narrative. Once the stories are finished, the teller puts all his memory devices back into the storyteller bag and says, ‘And now I tie it up.’”

Native American Almanac is filled with a number of little devices like this, which bring the past into the present, underscoring the continuity of Native American culture, despite over half a millennium of tidal waves of change.

The Trying It Up section of the chapter on The Great Basin and Rocky Mountains opens with this powerful quote from Sherman Alexie (Spokane/Coeur d’Alene), “Powwow”:

“today, nothing has died, nothing
changed beyond recognition
dancers still move in circles
children are bilingual: yes and no
still, Indians have a way of forgiving anything
a little but more and more it’s memory
lasting longer
and longer like uranium just beginning
a half life”

In sum, Native American Almanac is a collection of storyteller bags stuffed with devices to prod memories and aid in performance of the retelling. As such, it both helps to fill the huge lacunae in our knowledge about the diverse lived experiences of First Peoples and serves as a corrective to colonialist histories.

Less successful are the appendices on the rest of Indigenous North America (Canada, Mexico, Caribbean, and Greenland) requested, at the last minute, by the publisher. These back matter sections include a hodgepodge of definitions and random points on Indigeneity, such as a timeline of Indigeneity firsts, and a list of Indigenized English words. These addenda detract from the tight organization and apparent careful research and presentation of the rest of the volume. But then, all almanacs have a modicum of filler thrown in. In a way, that is their charm.