The National Road: Dispatches From a Changing America 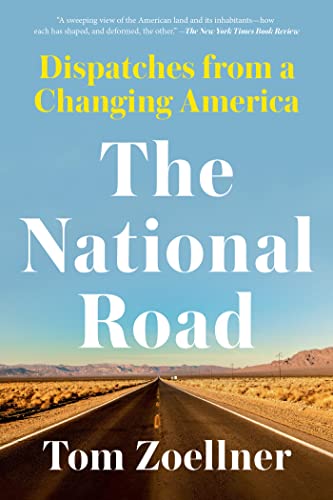 Though Tom Zoellner’s The National Road: Dispatches from a Changing America came out at the end of this unprecedented year, it is unlikely that even the author could have imagined the “changing America” he describes would be so profoundly altered.

The series of interrelated essays are a combination travelogue, American history lesson, reportage, and introspection. Zoellner’s capacious curiosity leads him from desert back roads and well-mown suburbs to big city subway stations that “smelled of asphalt, lead paint, frying onions and forgotten men in bowler hats.”

Most of the road trips he describes and the landmarks he visits—from lofty mountain tops in 44 states to humble Spillville, Iowa, the site of composer Antonin Dvorak’s 1893 visit just after completing “The New World Symphony”—have been out of reach for pandemic-era travelers who have been advised to shelter in place for almost a year.

In a way, that makes his adventures even more engaging. This book offers readers a view of the open road, at a time when it is more likely being read on a living room couch rather than on a hiking trail or at a roadside picnic table.

Zoellner, a New York Times bestselling author of eight nonfiction works, spent ten years as newspaper reporter. He credits his journalism background with his enthusiasm for seeking out interviews with all kinds of people from bartenders at a desolate desert roadhouse, to veterans of the Nevada bomb test site to customers on the checkout lines of the ubiquitous dollar stores. He avails himself to everyone with a story to tell.

In “Late City Final,” Zoellner traces his history as a cub reporter with small town newspapers, recalling how thrilled he was to get his dream job on a daily paper, the Wyoming Tribune and Eagle. The newly minted reporter covered city hall, rodeos, and the reintroduction of wolves in Yellowstone National Park. He relished “holding the morning Eagle, still damp from the presses, especially if some of my words were in it.”

But unfortunately, Zoellner’s newspaper career coincided with the decline of the industry. Not only small local papers, but also “the big old war-horses” like the Rocky Mountain News, succumbed to buyouts and mergers; others reduced their editorial staff to “the verge of extinction.”   He laments the loss of the print media, tallying more than 1800 papers that have been shuttered and a national readership that dropped by half between 2004 and 2019.

He fears that with the decline of local papers, the record of daily life in America “begins to disappear like brain cells under attack.”

Many of Zoellner’s stories, like his witty recounting of coming to New York as an aspiring writer, working temp jobs and riding the subway to far-flung boroughs, will resonate with anyone who has ever come to New York with grand aspirations. He captures the bittersweet big city dream perfectly:  “My presence here was that of a drifting ember. I would not change the metropolis one iota; it would not notice when I left.”

But that resonance is not always present—or at least not for all readers.

Zoellner’s ability to travel so freely around the country is not available to everyone. He writes that he often slept in his car—in parking lots at churches, schools, or shopping centers. A single woman would not take that risk, if she had a choice. Nor would a Black man. The author describes his worst experience was being awakened by a police officer who knocked on his car window and released him after running his license for warrants. Contrast that with what happened to Rayshard Brooks in June of this year:  the 27-year-old African American was reported for sleeping in his car at a drive-thru restaurant in Atlanta, and was fatally shot by police.

But Zoellner does not ignore the central question of race as he crisscrosses America. One of the most disturbing chapters, “Welcome to Dirtytown” takes the reader to Ferguson, Missouri, a suburb of St. Louis that sprung into the headlines after the police killing of 18-year-old Michael Brown in 2014 and the outcry that followed.

He drills deep into the history of racism in that area, which led to the volatile atmosphere there today. After World War I, many former sharecropping African Americans from the Deep South were drawn to work in the city’s steel mills and packing plants. In “venomous little towns of St. Louis County . . . white residents threw up a forest of legal restrictions,” against Blacks, including racial covenants in deeds that prevented them from buying homes in white neighborhoods. The federal government was complicit in this enforced segregation: the Federal Home Administration (FHA) made it nearly impossible for a Black family to secure a guaranteed mortgage, and the phrase “FHA approved” came to be synonymous with “No Blacks Allowed.” When this practice was successfully challenged in the 1948 landmark U.S. Supreme Court case, Shelley v. Kraemer, white residents devised a new method: “home rule” laws used zoning laws to incorporate small patches of land in the suburbs and tax laws to finance them. “Instant towns sprung up like crabgrass around the city core,” Zoellner writes.

These towns literally depended on police traffic stops—and subsequent fines—to make their budget. Police departments acted as collection agencies, municipal courts as profit centers. Ferguson, a former “sundown town," was by 2010 two-thirds Black with a virtually all-white government and a “police force that took extraordinary measures against its own citizens.”

It was not only Brown’s callous murder that sparked the sustained demonstrations, the author asserts, “but several hundreds of thousands of less newsworthy abuses . . . perpetuated by the city over the course of two decades.”

Zoellner also delves into the current consequences of the country’s racist history in “King Philip’s Shadow.” Debunking popular Thanksgiving myths, he writes of the Europeans’ arrival on the shores of Cape Cod and their lethal attacks on the Wampanoag, the “people of the first light,” and the colonists’ assault on a Narragansett encampment, burning families alive inside their huts.

These brutal actions resulted in the disappearance of entire villages; the indigenous population in New England dropped from seventy thousand to twelve thousand. “King Philip’s War did as much to define the current shape of America as the Revolutionary War a century later,” Zoellner asserts, “but it lacks a landscape of memory. There is no Freedom Trail no Concord Bridge, no Valley Forge. Locations associated with nation’s first full-blown war are nearly all erased and unmarked. . .”

Zoellner is frank about the dynamics of his journey. “Is there a self-indulgent side to all of this?” he asks rhetorically. Isn’t there something breathtakingly arrogant, and annoying about blowing into a town, making the rapid scan . . . before getting the hell out after sixty minutes and feeling has though the place has been notched? . . .” It is that honest insight that deepens the narrative of his escapades and offers a more complex view of the places he visits and the people—both contemporary and historical—he strives to know.

The collection is brimming with untold history and thoughtful reflection. Zoellner’s inquisitiveness and no-holds-barred exploration of the country’s DNA, both harmful and beautiful, makes The National Road well worth reading—especially at a time when we can’t travel down that road ourselves.

Elaine Elinson is the author of Wherever There's a Fight: How Runaway Slaves, Suffragists, Immigrants, Strikers, and Poets Shaped Civil Liberties in California.