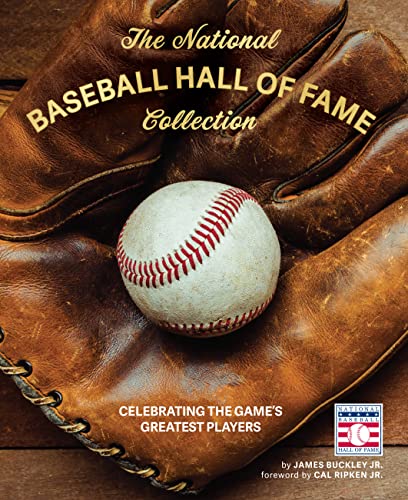 “It is challenging to balance audience appeal in a book like this. One must please both casual fans and those already familiar with the game’s long history. It is all too easy to lose one audience at the expense of another. . . . This book walks that tightrope reasonably well, with a strong emphasis on the modern era.”

Prolific author James Buckley Jr. has partnered with the National Baseball Hall of Fame for a handsome, officially licensed volume offering tribute to its enshrined honorees. Not all members are profiled, which will lead to the usual arguments regarding who was left out, but overall the choices for inclusion are solid.

The National Baseball Hall of Fame Collection features beautiful graphics and a striking cover and includes interesting sidebar features such as Lou Gehrig’s contract, a wonderful illustration of grips for different types of pitches, and artifacts such as Lou Boudreau’s glove and the scouting report for Sandy Koufax.

Each player’s career is summarized with a paragraph, accompanied by a profile or action photo. Outstanding players at each position, such as Mike Schmidt, Johnny Bench, and Willie Mays receive expanded treatment in a feature called “Best of the Best.” There are also several groupings of players in sidebars, such as top relief pitchers or New York Yankees starting pitchers during the team’s dynasty years of the 1930s–1960s.

In addition to players, there are also sections for managers, umpires, baseball writers, and pioneers of the game.

The text is upbeat and non-controversial, as would be expected. And it thankfully steers away from being reverential. The tone is comfortable and entertaining without being flippant.

However, the book is captive to the decision to lean heavily on photographs of each player, which presents challenges due to the inevitable inconsistency in the size and quality of available images. Choices are often limited due to the increasing monopolization of rights and even more rapidly increasing licensing fees.

As a result, while there are great, lesser-seen photos of Brooks Robinson laying out to glove a line drive during spring training, and Harmon Killebrew leaping into the air in a Washington Senators uniform, there are two photos of Bert Blyleven on one page in order to fill white space resulting from the constraints of the next man up alphabetically, and the type and size of available photos. Some images are also poorly reproduced, with varying degrees of shadowing, light and contrast, or poor resolution, such as the full-page action photo of Tom Seaver.

One also comes away with the sense that the Hall of Fame archives could have been better utilized to provide more artifacts and fewer player photos.

It is challenging to balance audience appeal in a book like this. One must please both casual fans and those already familiar with the game’s long history. It is all too easy to lose one audience at the expense of another. Often that means that neither is satisfied. This book walks that tightrope reasonably well, with a strong emphasis on the modern era.