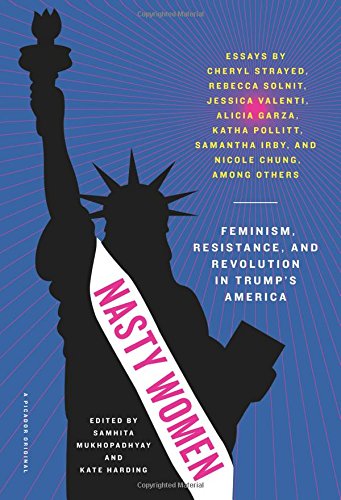 “Readers will shout and stomp; snort and yell, while reading Nasty Women. It is the perfect weapon for dispensing gut-ripping vitriol in the privacy of your own mind.”

“Such a nasty woman,” said Donald Trump during an October 2016 debate with Hillary Clinton. That comment reverberated throughout the world.

After the debate, Caroline Light, a gender studies professor at Harvard. Light said the practice of calling women “nasty” dates to colonial times, “A ‘nasty’ woman is one who refuses to remain in her proper place, as defined by men. One who challenges male authority.”

Trump’s comment reflected his anger that Hillary Clinton had the temerity to challenge him.

In the new book, Nasty Women: Feminism, Resistance, and Revolution in Trump’s America, 23 self-proclaimed nasty women weigh in on a plethora of topics ranging from identity politics to the war on the working class and pussy politics. The wide-ranging views are not a monolithic response to Trump’s insult. Through their essays, these women own their status as nasty women.

It’s a hoot and a half getting a book that provokes a reader to get down and dirty with the author—or in this case, the authors. Readers will shout and stomp; snort and yell, while reading Nasty Women. It is the perfect weapon for dispensing gut-ripping vitriol in the privacy of your own mind. The title alone will trigger comments from passers-by. Assuming, of course, they have the courage to approach; don’t be surprised if people give the reader a wide berth and walk quickly away. It takes a particular kind of courage to read this book. Nasty Women is not for the faint-hearted. The book wrenches a variety of reactions and requires time to digest. This is good reading.

The book spotlights women speaking out on topics of their own choosing without running it through a societal lens. One of the most memorable aspects of this book is that these are women with diverse and, at times, opposing opinions.

Nasty Women is a significant protest by self-avowed feminists against those who would challenge their inherent right to have an opinion and promote it publicly. Every woman who has ever been told to “shut up” will appreciate the effort.

Many men are genuinely afraid of strong women. It explains the vituperative reaction to Hillary Clinton as the Democratic nominee. She was chastised for smiling, not smiling, talking and, a personal favorite, being “psychologically ambitious.”

Rebecca Solnit, in her essay, A Nation Groomed and Battered, writes, “Hillary Clinton was all that stood between us and a reckless, unstable, ignorant, inane, infinitely vulgar, climate-change-denying white nationalist misogynist with authoritarian ambitions and kleptocratic plans.” The first eight months of Trump’s administration have proven that description spot on accurate.

Protest is an embedded trait in the American psyche, and this book manifests that predilection through a woman’s eyes. This country was founded on a fountain of protest.

Kera Bolonik, in her essay, “Is There Ever a Right Time to Talk to Your Children About Fascism?,” writes, “That protest is powerful, that resistance is powerful, that when people join together to fight for justice, it is not only effective but can restore hope for the future and faith in humanity.”

The power of protest and resistance to those who would destroy this fragile experiment of the American republic was evident in January 2017 when millions around the world stood up and said, “No.” Whether it was a woman wearing a pink pussy hat, or a car bearing a bumper sticker, “Don’t Blame Me, I Voted for Hillary,” protest and resistance permeates what it means to be an American. The United States is known as a “melting pot” and that pot is being stirred by anger and fear and hope.

Women constitute the majority of people in the United States. Throughout a woman’s life she is told what not to do: don’t be too loud, too opinionated, too shrill, too . . . whatever. Women are told to “smile” by perfect strangers.

Sarah Michael Hollenbeck refers to this in her essay, “As Long As It’s Healthy.” She writes, “As an adult, I’m still occasionally told to shut my mouth, to get more sleep, to stop yawning, or to smile, because either Jesus loves me or “it doesn’t cost a thing.””

Think about that. When was the last time a man was criticised for not smiling?

Nasty Women raises topics that many women only discuss privately, if at all. It can be liberating to see those deeply held resentments in print. To read the tales told by other women and breathe out, “and I thought it was only me.”

One of the wondrous aspects of this book is the visceral reaction it can generate in the reader. Strumming along through an essay, nodding in agreement and then . . . suddenly . . . the thought pops up, “How in god’s name can she say that? That’s absurd. I don’t agree with that.” And realizing there ain’t nothin’ wrong with disagreement.

Post-election many criticized Clinton for promoting “identity politics.” In Nasty Women, Rebecca Solnit addresses the issue, “’Identity politics’ is a disparaging term for talking about race, or gender or sexual orientation, which is very much the way we’ve talked about liberation over the last 160 years in the U.S.”

Oh, wait, that’s too angry and impolite to state. Women are supposed to always be polite, in all situations—that’s “ladylike.” Nasty Women revels in being so much the opposite.

Read the book; be prepared to think, disagree, cheer and marvel at what a bunch of intelligent, articulate, unafraid women have written about.