Narconomics: How to Run a Drug Cartel 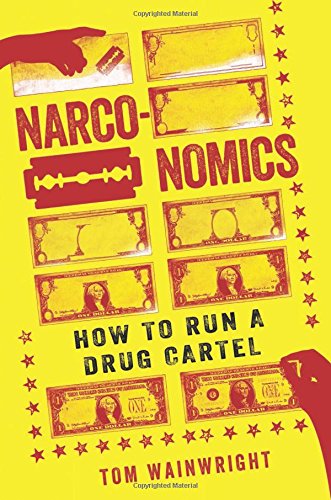 Cartels are businesses that exist on the wildly entrepreneurial illegal side of capitalism. The power of Narconomics: How to Run a Drug Cartel is its synthesis of existing materials, in-depth original ethnographic journalism, and a rendering of cartels and the narcoeconomy as an entrepreneurial corporate venture subject to the same analysis as any business. Tom Wainwright engages the fraught War on Drugs with a fresh take and incisive analysis.

Wainwright does a masterful job of demonstrating how cartels run like businesses with many of the same challenges as their legal corporate counterparts. They must recruit and manage personnel, deal with government regulations and interventions, have reliable suppliers, fathom the challenge of competitors, and keep clients happy. Operating under diverse conditions and approaches, he shows how cartels take on different strategies to face these challenges.

Chapter 1 focuses on eradication as a pillar of the War on Drugs. Focusing on Andean coca, he notes that there is a tight supply chain between coca producers and their cartel buyers who process the product into cocaine. There is only one game in town if you want to sell your coca leaves. Under these kinds of conditions there are two effects.

First, cartels simply put the squeeze on farmers by passing along the cost of eradication losses to farmers who must absorb it—a kind of hidden cost or externality. These practices look like welcome “efficiencies” to consumers for whom prices stay low, but are a hardship for producers who bear the burden of those efficiencies. Poor farmers get even poorer.

Second, if the heat gets turned up too high on the cartels in one region, they simply move to another— the “cockroach effect.” This neither particularly disrupts or increases the cost of coca production, because of the monopsonistic supply chain controlled by a few dominant buyers. If you want to sell your product you have to play by their rules and accept their prices.

Chapter 2 explores business competition through the lens of Cuidad Juarez at the height of cartel violence there for control of the city. As the Juarez Cartel fell into decline through attrition of its leadership beginning as early as the late 1990s. The rival Sinaloa Cartel, and El Chapo “Shorty” Guzman, stepped in to fill the vacuum because controlling a gateway port into the U.S. is so financially lucrative. Because the Sinaloa Cartel had to regulate the regulators (i.e., the police), they ultimately found a willing partner not in the locals, but rather in the federal police and military. The goal was to control that piece of turf at all cost. Hence the shocking levels of violence beginning in the late 2000s.

Contrast this with El Salvador where the cartel strategy was different. Rather than competing, the Mara Salvatrucha and Barrio 18 colluded, dividing up a big market into smaller monopolies so that everyone got their cut. Violence dropped precipitously under changed market conditions.

Chapter 3 addresses a key HR challenge: cartels and their personnel problems. Because it is an illegal business, cartels cannot advertise for their positions. Prisons are a center for recruitment and training. Using some very funny anecdotes, he underscores that low and mid-level operatives are often simply not necessarily the sharpest folks, which cuts against the stereotype of robotic, ruthless professionals.

Cartels, thus, have an HR problem managing employees, clients, and suppliers in a world where contract law does not exist; hence the only fallback of violence. So the most successful cartels have the best personnel management systems that demand fealty in an authoritarian system of command-control. Some cartels have gone so far as to create codes of ethics to counterbalance the lure of internal exploitation or other forms of outright theft when it is so easy and tempting.

Chapter 4 unpacks the seemingly counterintuitive scenario of cartel as corporate social support system. Indeed, in Mexico cartels are busy creating a shadow state in many parts of the country by filling a critical social support role that has been discarded by a corrupt and bankrupted central government, as well as the Catholic Church, which also finds itself on hard times. If one connects the dots of the cartel insurgency, it goes well beyond local social welfare. As Wainwright notes, in Mexico regional journalists are largely silenced by violence or its threat. To this we can add that all manner of public security is infiltrated and compromised. We can say the same about the political system. Taken as a whole, this looks very much like an incipient civil war.

Chapters 5 considers the process of “offshoring” as cartels find it increasingly difficult to do business at home because of increased security or other disruption. Following standard global capital operating procedures they move to a more permissive environment where doing business is cheaper, quicker, and you do not have to worry about pesky externalities like fully terrorizing the local population. For Mexican cartels look no further than Guatemala, Honduras, and El Salvador as a convenient landing pad.

Chapter 6 takes on the interesting phenomenon of franchising where cartels provide training, equipment/weapons, and trademark branding to local operators who do local legwork. The cartel, in turn, gets free advertising and a cut of the take in a low-cost expansion of operations. Provocatively Wainwright contends that overly franchised cartels, like the Zetas, are subject to in-fighting because they are territory based. Older-school cartels like Sinaloa are about particular kinds of business rather than holding territory.

Chapters 7-8 take a diversion into the realm of innovation (the legal high business and on-line customer service) that is interesting but already covered by such fascinating cases as the Salvadoran colluding gangs, along with offshoring and corporate responsibility among Mexican gangs.

Chapter 9 is another case of innovation—cartels diversifying into all manner of other illicit activity from human smuggling, to prostitution, theft, and extortion. To this we might add the expansion into legal businesses not just to launder money but to make a profit.

In closing Wainwright underscores a number of mistakes that politicians and policy makers have consistently made since the launch of the War on Drugs: