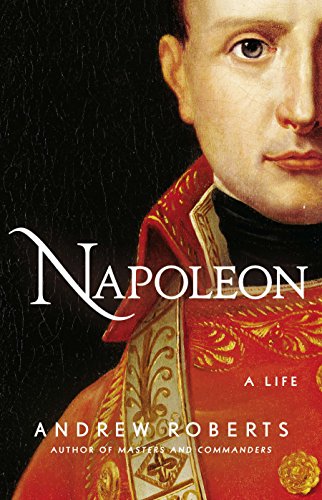 Napoleon: a Life is an epic biography by a popular writer who has done the “on the ground work” needed to make the latest of the thousands of biographies of Napoleon something new. Andrew Roberts boasts that he has personally toured 53 of Napoleon’s 60 battlefields, visited 80 archives in 16 countries, and even traveled to St. Helena.

Roberts’ personal encounters with history make this narrative special but more important is his documentary research. This book is not revisionist as much as a reexamination based in an honest appraisal of what Napoleon referred to as the labyrinth of conflicted and partisan sources that a historian must contend with. New letters by the Emperor have turned up and the mountain of memoirs, including by Napoleon himself, required careful analysis to separate fact from self-serving tales.

The reader is engaged by this book before being swept away in this grand adventure as if from the view of a lifelong friend and dearest confidant. In these pages, however, "Bonaparte" never becomes "Napoleon." As portrayed here, Napoleone di Bouna Parte was a lonely boy whose only real friends are his books. For his whole life, he was introverted, seeking approval, immature, and self-conscious as to seemingly suffer from an inferiority complex. His first great personal failure was as a romantic writer.

Napoleon read to learn and from that knowledge experimented. It was all to understand in order to teach, even more than about ego, glory, and power. His famous maxims can be read as lessons from his failures as much as explanations for his success.

The author is a Bonapartist in a fashion, but he never excuses his subject’s failings and failures. As Roberts wrote in the last line in his account of the most battle famous of the era "not only did Wellington and Blücher deserve to win the battle of Waterloo: Napoleon very much deserved to lose it."

The Corsican born emperor of the French was a talented genius, however, and on more than one kind of battlefield. He played the game of politics as he did war, taking each battle as it came within a greater strategy. Yet he did fail as he grew older and was in no ways the genius of Marengo and Austerlitz by the time he did so poorly at Borodino.

Napoleon could change because he had to and when he needed to. He learned, for example, that shoes were at least as important as cannons and victories were bought not just with blood but hard cash, he had learned long before Russia that an army marches on its stomach and best when drunk.

The Emperor may, as the author points out, have had no ideological goal but he did have vision that his often single minded critics lacked. He was also one of the greatest conquerors of all time, a ruler who came to dominate Europe and whose actions changed the world from Columbia to Israel.

Napoleon sought, however, "active collaboration not mere submission" from the people. Unlike even some modern leaders, he understood that he "could win the war" only if his administers moved quickly "afterwards to win the peace" and "Napoleon brought enlightenment to peoples who, without his armies' victories, would have remained often without rights or equality of law.”

This dictator in a revolutionary age of social struggle against class oriented oppression and intolerance abolished internal tariffs, guilds, the Inquisition, and noble privilege while bringing religious toleration, good government, and merit based advancement.

As a social progressive, he became the most dangerous of enemies for Austria, Britain, the Italian States, Russia, and Spain, why the Congress of Vienna tried to turn back the clock on political and social progress in Europe after his downfall.

Roberts gives us this whole man; his military victories, extensive internal improvements, government reforms, patronage of the arts, encouragement of learning, legal reforms--are part of this moving epic. He made Paris a great center for culture and learning, even though he did so by looting even the Vatican.

An uncompromising obsessive micro manager, Napoleon failed in the end. Roberts concludes that “what brought down Napoleon was not some deep-seated personality disorder but a combination of unforeseeable circumstances coupled with a handful of significant miscalculations: something altogether more believable, human and fascinating.”

This book offers concise arguments without room for great detail or real counterpoint, even at more than 800 well-researched pages of narrative. Fortunately, the author is not only an award winning respected scholar but also an engrossing storyteller. The Illustrations are extensive and well chosen.