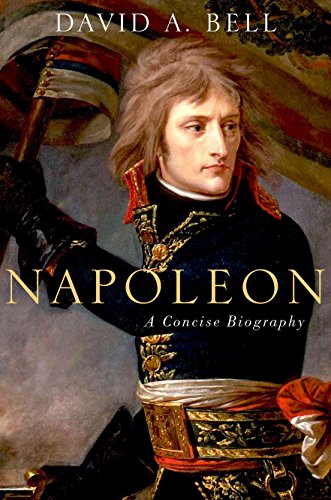 Prior to David A. Bell’s new work, detailed investigations of the “life and times of Napoleon Bonaparte (1769–1821)” did not evoke notions of a short, slim volume. Rather, the idea of brief overview of Napoleon seemed more like a bibliographical oxymoron or, at least, a very significant challenge. Considering the massive number of biographies on Napoleon, including several recent ones, delineating a tremendously complex figure with concision is a formidable task. The task is magnified considerably when the era of Revolutionary France is included—any discussion of Napoleon must include the Revolution. As Bell points out, it produced the social and political environment through which Napoleon’s opportunity to change Europe emerged.

On all counts, Napoleon: A Concise Biography is a thought provoking success. Not only is the book succinct, informative, and meticulously supported through Bell’s extensive research, it is also gratifying to read.

As he indicates early on, the book is intended for readers without expertise in history, although historians will find Bell’s approach refreshing and smaller books, such as Bell’s, are manageable for undergraduate courses in particular. In this regard, Oxford University Press, Bell’s publisher for this work, also continues to attract readers through focused and compact books. The A Very Short Introduction series Oxford publishes exemplifies this salutary trend.

While Bell’s work is not part of this series, his effort models both brevity and comprehensive investigation. In fact, Bell’s work, which discusses the importance of both the French Revolution and the Napoleonic Wars, does so in less space than two of the Very Short Introduction titles that respectively cover both topics. Focus is the name of the game for David Bell and his book’s structure is a key contributor. Of course, it does not hurt that Bell also writes extremely well with general but intelligent audiences in mind.

The 13-page introduction covers the age of democratic revolutions of which the American and French Revolution were foremost examples. These events shattered and uprooted their respective societies, and they profoundly influenced other revolutions that followed elsewhere in the world. Moreover, the social and political institutions the French Revolution created—or destroyed more accurately—created a vacuum of power that Napoleon filled.

Through timing and skill, in other words, Napoleon massively capitalized on the opportunities the revolution provided. As Bell writes, “the Revolution made possible an unprecedented concentration of political authority, as well as unprecedented ways of mobilizing the country’s human and material resources. In this way, Napoleon Bonaparte would reap what the revolutionaries had sown.”

Building upon these factors, Napoleon came to power at a time when French society was committed to the principles of the French Revolution as a “crusade to liberate humanity.” Critically, this “crusade” took place on a scale previously unseen with warfare, with all its cruelties, extending far beyond armies and affecting civilian populations throughout Europe. Bell examined this process and period fully in a previous book, The First Total War: Napoleon’s Europe and the Birth of Warfare as We Know It, published with deserved acclaim in 2007.

Napoleon’s background and rise to power are documented in chapters one and two, “The Corsican, 1769–1796,” and “The General, 1796–1799.” In these, as well as other chapters, Bell details both the political and military history of Napoleon’s career while including elements of social history that help contextualize the Napoleonic Wars.

The public relations capacities of Napoleon, and his emphasis on appearing as a comrade-in-arms to soldiers of the Grande Armée, were significant factors in his success. Bell also discusses innovations Napoleon instituted such as utilizing a chief of staff – Louis Alexandre Berthier – who assisted in the coordination of orders and the numerous corps in the army’s organization.

The period known as the “Consulate” constitutes chapter three. This period in the very early 19th century, is recognized for both Napoleon’s authoritarian rule as well as simultaneous state-building. These latter efforts led to the “Napoleonic Code,” a series of legal reforms based on principles of Roman law.

Bell notes that “It (the Napoleonic code) confirmed the French revolutionary principle of equality before the law—including the end of noble privilege—and the rights of all children to a share of an inheritance, an innovation that fundamentally changed patterns of French property-holdings.” Bell’s biography of Napoleon, in this regard, is as much social history as political and military history and it goes far in condensing a critical period of French innovation without diluting its complexity.

An additional example of how the biography works on several historical levels is Bell’s brief, but detailed description of the Battle of Trafalgar in October 1804. This defeat revealed a major weakness which Napoleon could not overcome: an inexperienced navy whereas the British Royal Navy did possess such expertise on the waves. This was most visibly and directly represented by Horatio Nelson’s leadership and operational skill. The following chapters investigate Napoleon’s only viable military option, land war in continental Europe, through which he confronted not only one alliance, termed “coalitions” during the Napoleonic Wars, but seven.

Napoleon’s downfall, when it came, stemmed not from the failure of 1812 to successfully raze Moscow, but from overreach throughout Europe. Spain, for example, was more than a thorn in Napoleon’s administration. The modern term “guerrilla” originates with the irregular warfare with which Napoleon’s brother, Joseph, contended on the Iberian Peninsula. Bell details the denouement of Napoleon’s career and then concludes his book with an intriguing epilogue which includes a brief historiography on both the French Revolution and Napoleon.

The “Further Reading” section extends the book’s utility making it ideal for the classroom. It will also be of interest for general readers who do not have time for heavier biographies on the market but still wish to know more about the Napoleonic Wars and French society during this period of time. Without question, David Bell is wrapping up 2015 with a strong mark through his work on Napoleon. He certainly is setting the groundwork for a positive 2016 as well. This is indicated by Shadows of Revolution: Reflections on France, Past and Present, scheduled for publication in January. Not surprisingly, Napoleon figures prominently in that work and Napoleon: A Concise Biography is a great and highly enjoyable step in preparation for it.