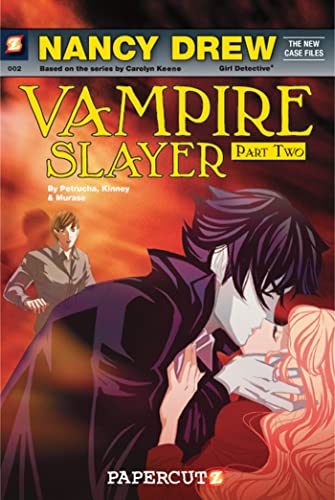 A Vampire’s Kiss is a combination of Buffy the Vampire Slayer and Twilight, but without real vampires, blood, or age-inappropriate material.

Nancy Drew’s story is once again remade and given a fresh twist as a graphic novel. There are at least 20 Nancy Drew graphic novels by Papercutz, but now they have created new case files for her.

Nancy Drew is now a Vampire Slayer—or is she? A Vampire’s Kiss is a continuation of part one of this series, The Vampire Slayer. In part one, Nancy is caught up in River Heights vampire movie mania. She is dressed as a vampire slayer, but is really not one. She and her friends run into a mysterious man who exhibits clues that suggest he might be a vampire. His name is Gregor Coffson and he has recently moved into the old Benson Estate. He is a man shrouded by unknowns.

When Gregor learns about Nancy being a detective, his interest in her grows more apparent, which bothers Nancy’s boyfriend, Ned. Nancy meets with Gregor many times, learns a lot about him, and finds that she has become his friend.

Over time it becomes apparent that Gregor is not really a vampire, but a person who has a terrible condition that forces him to live a life of seclusion. He is very pale and can only come out at night. His secret, and what he needs some major help with, is for Nancy to run interference with a person who thinks Gregor really is a vampire. This person has been stalking him and won’t leave him alone. He wants Nancy to help him.

In the process of Nancy attempting to help Gregor, the villain gets access to the house and locks Nancy and Gregor inside. She confronts the intruder. The Vampire’s Kiss is the conclusion to this case.

In part two, Nancy’s friends are trying to get back into the house, which has been locked down for protection when the villain triggers the alarm. Nancy and Gregor are confronted by the villain, who is ready to kill Gregor. As Gregor becomes weaker and more scared, Nancy steps in. And the drama begins!

Gregor reveals that he is in love with Nancy, but does she share the same feelings? Has the time she spent with him made her feel so sympathetic toward him that she will return his feelings? Or is she still in love with jealous Ned? Her decisions seal her fate. A Vampire’s Kiss is definitely filled with the kind of suspense that will captivate readers. Fans of Nancy Drew and graphic novels are going to love her new cases. She’s still the same perky girl, but as she is a bit out of her element in these stories, revealing a refreshing versatility and even more ingenuity than we have already come to expect from this junior detective.