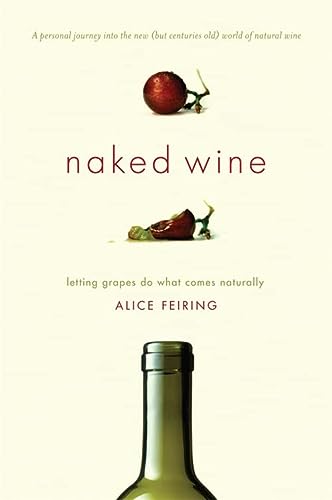 “. . . for the more adventurous wine drinkers out there, Naked Wine makes one want to explore. For the wines that Ms. Feiring likes, she provides such glowing descriptions that one wants to try them. Perhaps you will decide that natural wine is not for you, or perhaps you will become a convert.”

Alice Feiring’s first book, The Battle for Wine and Love: or How I Saved the World from Parkerization, may be summarized as: Alice Feiring discovers wine, discovers that she is pickier about wine than most people, and travels around the world writing about wine and wine makers, making friends and enemies along the way. Her newest book, Naked Wine, is more narrowly focused on so-called “natural wine” and the wine makers around the world who strive to make natural wine.

The result is a book that takes on a controversial subject and peoples it with passionate and sometimes eccentric characters. An open-minded reader may at least be tempted to see whether she shares Ms. Feiring’s somewhat extreme tastes in wine.

“Natural wine” does not have an official definition, but it is basically wine where nothing is added and nothing taken away, as Ms. Feiring puts it. It is more a reference to wine making than grape growing, so that one can grow (or buy) grapes using sustainable, organic, or biodynamic agricultural practices and still make wine that does not qualify as natural.

The simple definition masks a lot of gray areas, as Ms. Feiring recognizes. Part of the first part of the book narrates her adventures with trying to make natural wine in California. Ms. Feiring is a fan of the style of Sagrantino made by Paolo Bea in Umbria, Italy (Bea is my favorite Sagrantino producer as well), and when the opportunity to turn some sagrantino grapes into wine presented itself, she took it. She managed to avoid using sulfur and used no additives, but the wine was going to come in at 15 to 16 percent alcohol, so she had to add water to the fermenting must to bring that level down in the final product. But you evidently can water down wine and still have it be considered natural.

For the most part, the book is not a discussion of natural wine or a precise analysis of what makes a wine natural or not, although there is some of that. Instead, Ms. Feiring presents a series of narratives about the people who make natural wine, concentrating on France, Spain and California. She lets them give their views on natural wine.

We meet Nicholas Joly, maker of the rather expensive Coulee de Serrant in the Loire Valley, who is the de facto leader of the biodynamic movement for grape growers (extending to the use of natural yeast in winemaking). Ms. Feiring was invited to attend a gathering of biodynamic wine producers, who were assessing wines seeking the blessing of the group. She writes:

“Tasting commenced. If I had ever thought I was judgmental about wine, I was a pussycat compared with this crowd. I have sometimes insulted friends because I’ve rejected their taste in champagne, for instance, or called something undrinkable because I couldn’t get past the wine making methods and resulting taste. But in this company I had nothing to apologize for.”

Many of the wines, Joly complained, had no “song.”

We meet Eric Texier, a nuclear engineer turned winemaker, who makes wine in the Southern Rhône (his Côtes du Rhône is being sipped as this is written), and who helped Ms. Feiring navigate through discussions where more than her rudimentary French was needed.

And we finally meet Jacques Néauport, a pioneer in the natural wine movement, whose name kept popping up in discussions with winemakers. After she made contact through others, he invited her to lunch. Ms. Feiring describes the long, vinous lunch in great detail, as well as her interview with Néauport, who did not really provide her with many definitive answers. But the lunch and interview are an engaging, enjoyable read.

Ms. Feiring’s crusade is to encourage the growing cadre of natural wine makers, and to encourage people to try their wines. She is up against more influential wine writers (like Robert Parker) who are less than enamored of this style of wine. But are natural wines readily distinguishable from wines that make no such claim, and are they more enjoyable?

One of the appendices to the book is Ms. Feiring’s personal list of producers that make wines that are “natural and natural enough.” She notes that “If you have trouble finding them, which is probably the case, search for them on WineSearcher.com.” Fortunately, one of our local wine shops that has its inventory online had wines from at least nine of the producers on the list. We selected four of the wines, looking for ones where there was also at least one wine from a producer not on her list, in the same region, same vintage, and similarly priced. They all turned out to be French red wines.

Our panel of four tasters was very experienced. None of us was a Parker Point chaser, and we all already knew what was meant by “natural wine.” We blind tasted four sets of pairs: one wine from a producer on Ms. Feiring’s list and one wine not.

It should be noted that it is actually fairly difficult to tell from a bottle’s label or online research whether a wine would or would not qualify as natural. The term is not likely to be used on the label (front or back) or on the web site. Further, the notes about the wine on the website are not going to reveal the extent, if any, to which a wine was manipulated. We had to take Ms. Feiring’s word that the producers on her list made natural wines. It is possible that some of the wines we compared to her wines would have qualified as natural, but simply did not appear on her list.

That said, we were more successful than not in correctly picking out which wine was the one on her list. They tended to combine more complex aromatics with a somewhat lighter, less fruity style. There was, however, more disagreement about which wine we preferred. The panel often split on which wine we liked better. The natural wines did not necessarily have a “song” that the other wines lacked. We actually found all four natural wines to be pretty tasty, but your mileage may vary.

But for the more adventurous wine drinkers out there, Naked Wine makes one want to explore. For the wines that Ms. Feiring likes, she provides such glowing descriptions that one wants to try them. Perhaps you will decide that natural wine is not for you, or perhaps you will become a convert.