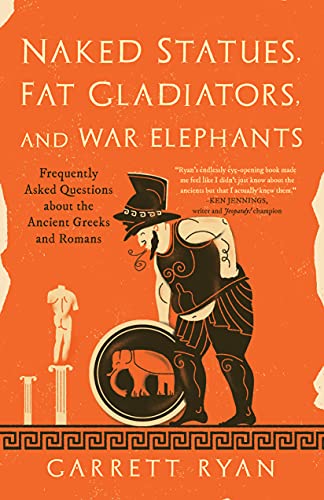 “Garrett Ryan entertains as well as educates on the ancient history of the Greeks and Romans.”

Americans generally know the ancient world from television documentary channels, entertainment like the movie Raiders of the Lost Ark, and video games. Often what appears in historical studies in print is too specific, too big, and too detailed for the general reader without a background in the subject. That does not have to be.

“With nothing more and nothing less than pithy summaries of current scholarship, spiced with anecdotes from ancient sources,” Garrett Ryan entertains as well as educates on the ancient history of the Greeks and Romans. Naked Statues, Fat Gladiators, and War Elephants is reminiscent of John Farman’s The Very Bloody History of Britain without the Boring Bits.

The author, a college professor, answers questions his students asked or might have asked based on what they know of the classical ancient world. Wherever the questions come from, those in Naked Statues are extensive but “do not pretend to be comprehensive—there is only so much that can be said in a few sprightly pages.”

“A very short history of the classical world” comes at the end as an appendix to Naked Statues, for the many readers who need at least a fundamental explanation of the subject. Even the introduction is notably concise.

Naked Statues references some of the famous such as Alexander the Great, Constantine, and Galen “one of the ancient world’s celebrity doctors.” It discusses some major questions such as why paganism lost out to Christianity and why Latin morphed the Romance languages while Greek remained the same.

This book, however, does not set out to explain broad general history but rather to offer lessons in the social history of the Greeks and Romans, what too often goes overlooked in college survey courses. The author explains that the reader’s ancestors lived this world “if you have even the tiniest drop of European DNA” and you are thus “all but guaranteed to be a much-displaced cousin of any given Greek or Roman.”

Topics include birth control, cosmetic surgery, diet, public services (and lack thereof), shaving, time keeping, wine, and so much more in brief but lively essays. Within the main topics, the reader learns about such things as Greek and Roman lawyers, sanitation, slavery, and underwear. Although short, these chapters reflect the complexities of the answers except when there is “no need to be coy.”

Education can be about learning—and also fun! Ryan answers each question with a concise lecture that gives a general example and might end with one or more specific anecdotes. In this way, the author often outlines how the world came to change from then to now, such as in answering why these ancients did not wear pants or why the Romans never conquered Germany.

For the whole, however, the reader sees that such problems as economics, not “understanding germ theory,” “a patchy understanding of anatomy,” short lifespans, wealth disparity etc. affected so much of these people’s lives. The book does not cover how really boring and monotonous life must have been for anyone in those centuries except that building projects and travel seemed to take terribly long periods.

How some things remain the same such as the Emperor Hadrian’s challenging the conventions of his time to wear a beard “a badge of masculinity” that Alexander the Great did not or would not have. Greeks and Romans loved birds and dogs in ways appreciated to this day, although “the most alluring eels [also] became cherished pets” to the Romans.

So much understanding for students! The reader can learn, for example, that to the Greeks and Romans “food was power” and could be “displayed, digested, and dismembered to shock and awe guests” in “stupendously expensive” feasts.

Similarly, most of the Greeks and Romans believed in the gods but never “developed a canon of sacred texts, caste of priests, or a code of moral rules.” These peoples also literally believed in demons, ghosts, magic, and monsters. “Most of the accounts of human sacrifices,” however, can be “chalked up to rumor or slander.”

Historians and teachers like to digress and divert. Ryan does, too, but he does move to the anecdotes “which provide interesting details I couldn’t consciously cram into the main answer.” In instances like that, Ryan sometimes teaches more than the distant past but also the means to inspire interest and learning with stories over boring recitation of irrelevant facts.

Naked Statues includes annotation, further readings (arranged by chapter), and some illustrations. It would make an effective reading for in a history course on the Greeks and Romans.