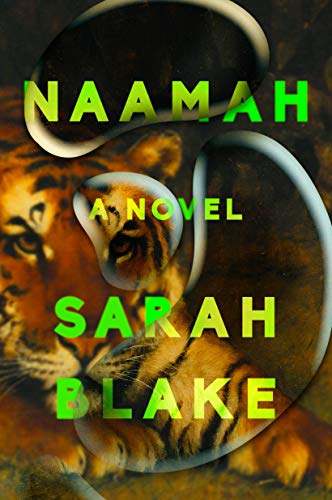 “This isn’t a novel to reinforce easy faith. Rather, it narrates a feminist Jewish world view, negotiating comprehension of a world in which God’s ways are inhuman and often terrible, and in which the consequences of human connection can be devastating.”

Sarah Blake’s Naamah retells the biblical story of the flood from the point of view of a woman most often referred to as “Mrs. Noah” or “Noah’s wife.” In Jewish biblical exegesis, that woman’s name is Naamah, and so it is here. She is a point of origin, “the first to know Noah to be a just man and perfect in his generations. Naamah married him before God ever spoke to him.” She becomes the person without divine insight who moves beside the one who does as they face the end of their world.

The agency of “Naamah married him” is the heart of the novel. This Naamah is not a product of her time. Her life is not shaped by the patriarchal structures of prehistoric Israel, nor is she the supplemental figure who exists only to produce sons. This Naamah is a woman who makes her own decisions, who is autonomous, and whose body, sexuality, and identity are not subsumed by the men in her life.

This is not to say that Naamah is empowered. Like everyone in the book, she is helpless before God’s will. God walks with Noah before the flood began, but no one else is consulted. Noah and his wife, and his sons and his sons’ wives, and the animals (two each of the unclean; rather more of the others) go into the Ark and are saved. Yet that salvation is a terrible one. Their extended families die. Their friends die. Their communities die. All of the (other) animals die. The world is erased.

Nor is the flood over after 40 days. The rains end, but the water doesn’t recede for endless months. Naamah descends into a kind of self-contained madness. She cares for the animals, but she can no longer see them. Even as she cares for them, she knows them only through smell and touch. Their visual absence is striking: Others can see the animals, only Naamah cannot. Her failure is both disturbing and miraculous.

Naamah is, of those on the boat, the least reconciled to God. She alone goes swimming in the waters surrounding the boat. Deep in the water, seeking out the dead, she finds an angel. Other than its gender (female), the angel is profoundly indefinite: “The angel flickers in and out of focus like any object in the water, but this seems more calculated, as if to mislead Naamah, so that she might sound mad if she ever tried to describe her to anyone.” It’s the book’s first glimpse of the indescribable divine. The agents of heaven, whether angelic or God Himself, are indefinite creatures. Their existence damages the human mind, so these beings come frustratingly disguised, though their disguises make them difficult to love.

Naamah doesn’t love God. Naamah is furious with God. God killed Naamah’s friend and lover, Bethel. God killed everyone. God enclosed Naamah and her family, and all of the animals that remain, on an Ark that can barely contain them. The animals devour one another, and their hunger and their waste are pressing concerns.

Months pass and the waters don’t recede. Each character worries that some small mistake they have made will result in further divine punishment. Some animals die, in spite of their best efforts, and the family grows frantic. In spite of Naamah’s warnings, her eldest son and his wife have a child, and they all begin to wonder whether all of them, human and animal, will live on the Ark forever.

Blake’s novel is a strong revision of a classic story. In dreams, Naamah sees a future in which the Ark is a sweet tale for children and finds that unimaginable. Her disorientation is Blake’s theme: that the Flood is an apocalypse, a horror almost beyond imagining. The only way to truly comprehend it is to examine it at a human level. Each animal’s importance becomes terrifying, and each person becomes small in comparison, yet critical to any imagined future.

This isn’t a novel to reinforce easy faith. Rather, it narrates a feminist Jewish world view, negotiating comprehension of a world in which God’s ways are inhuman and often terrible, and in which the consequences of human connection can be devastating.