N-4 Down: The Hunt for the Arctic Airship Italia 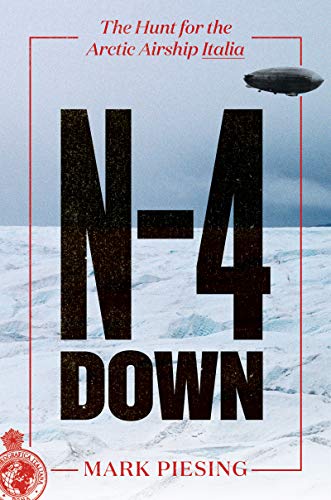 “Mark Piesing in N-4 Down explores the least remembered of this forgotten era: the story of Roald Amundsen, Umberto Nobile, and their airship adventures in the Arctic.”

“Today the huge cigar-shaped airships of the early twentieth century seem to be artifacts of a lost civilization.” People flew dirigibles across the Atlantic in luxury, zeppelins bombed London, and blimps hunted for enemy submarines. This mode of transportation, like private space travel, proved dangerous (e. g. the Hindenburg) expensive, technically challenging, and impractical—but it was a beautiful dream.

Mark Piesing in N-4 Down explores the least remembered of this forgotten era: the story of Roald Amundsen, Umberto Nobile, and their airship adventures in the Arctic, “one of the greatest aeronautical feats of all time.” Almost half of the book prepares the reader with sufficient background for the gripping telling of the story of the crash of N-4 Italia and the deadly attempt at rescue.

Aeronauts “once upon a time explored the unknown lands of the North Pole” at the risk to and sometimes the cost of their lives. In “a time when some countries even considered banning aviation altogether because it was so dangerous,” “the zeppelin and the airplane battled it out in the Arctic skies for the future of aviation.”

In 1897, “Swedish hero Solomon August Andrée” and two crewmen tried to fly from the “gates of the North Pole” “Svalbard to the North Pole in a balloon.”  “It would be another thirty-three years before, their skeletons were found.”

Other explorers paved the way for Arctic aviation. Walter Wellman made unsuccessful attempts to reach the North Pole in his airship America from 1906 to 1909 and Polish aviator Jan Nagórski “became the first to pilot an airplane successfully in the Arctic.” American Admiral William Byrd claimed to be the first to reach the North Pole in an aircraft, but his claims are disputed.

The great character in the story of the disastrous last flight of N-4 Italia in 1928 is the famed polar Roald Amundsen. He had already achieved the first to pass through the Northwest Passage and the first to reach the South Pole.

Amundsen next set out to achieve aviation success in the Arctic but “he and his fellow explorers had little knowledge of mechanics.” “Death and humiliation seemed to be the fate of those who tried” Arctic aviation. Amundsen went bankrupt financing his first two airplanes, each of which crashed early on.

As a backstory, Amundsen’s Norway had gained independence only in 1905 and, coming late to the
“Great Game” of imperialism, sought to build “a new empire of snow and ice, an empire hacked out of the frozen land by the Norwegian men” through “air stations and bases.” Germany, Russia, Sweden, and other nations also vied for the coal discovered in the polar Svalbard Islands.

The Arctic of that time loomed large in the media and the public’s imagination. More than 1,000 men died trying to reach the North Pole by various means. It had “real-life mysteries such as the disappearance of the Franklin expedition” but some people also readily believed “tales of wondrous lands and terrifying encounters” with the devil, cannibalism, ghosts, ghouls, hallucinations, mirages, and other phenomena. “The stories . . . shaped future explorers’ own expectations.”

Such background makes the detailed account of Amundsen’s and Nobile’s adventures so much more than high adventure in a deadly, unforgiving environment. Amundsen and his partner Lincoln Ellsworth, for example, had harrowing adventures in a failed effort to fly to the North Pole in special flying boats.

In 1925, Amundsen turned to Neapolitan adventurer, aristocrat, engineer, explorer, and more Umberto Nobile for an airship that could cross the Arctic. Nobile had become involved in an international race to build the biggest such aircraft, to establish airlines, and, now, in the race to fly the first aircraft to the North Pole.

This journey risked a possible deadly crash or “a year spent walking back to civilization over the sea ice.” For Nobile, failure to reach Alaska meant “failure for him, his family, and for Fascist Italy.” He offered the use of airship to Amundsen and Ellsworth for free “if it flew the Italian flag.”

These adventurers discovered that their comfortable stable airship the Norge proved “the ideal platform for polar exploration” but also “how dangerous a crash landing would be.” Unlike an airplane, engine repairs could be made without landing but maintenance work outside the ship, in cold, ice, and wind, could prove deadly. The last leg of their journey nearly proved fatal for the Norge as it crash landed in Alaska.

On May 12, 1926, the passengers on the Norge became the first people, indisputably, to have reached the North Pole. Amundsen now held the record of the first person to have been to both poles and Nobile “had shown the world what airships could do.” They established that the Arctic is a sea devoid of almost all land.

“The age of the polar explorer [Amundsen] was over and the age of the aeronaut [Nobile] had begun.” That proved particularly ironic, as Amundsen a pilot, had pioneered Arctic aviation and the story of Nobile’s later airship the N-4 Italia.

Nubile and Amundsen had fought over everything including national prestige and possible profits. An argument ensued over how many Norwegians would accompany the expedition as opposed to Italians.

Italian dictator Benito Mussolini publically proclaimed the success of the venture for his country and the subsequent international acclaim for Nobile widened the disdain that Amundsen held for the airship engineer.

In 1928, when Nobile and his crew disappeared with the airship N-4 Italia over the Arctic, a retired and critically ill Amundsen still set out by plane on a rescue mission. The old school Arctic explorer and his companion never returned although Nobile and five other survivors of the Italia were eventually rescued after several harrowing days on the ice.

N-4 Down is an engrossing read where the author seamlessly tells a great adventure including adequate background but without distraction from his storyline. It makes a fast and engaging read. This scholarship has annotation.