Myths of the Oil Boom: American National Security in a Global Energy Market 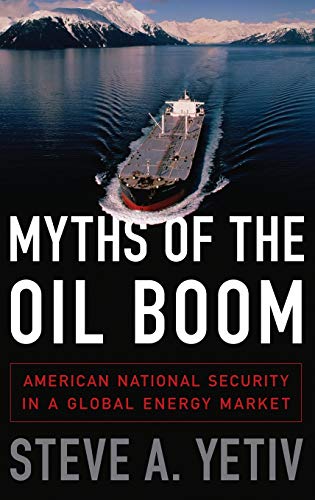 Yes, we are in the midst of an American oil boom, one that helps explain the precipitous decline in gasoline prices over the second half of 2014, as well as an only modest rebound so far in 2015. And yes, that boom, before it levels off around 2020, may well lead the U.S. to overtake the Saudis as the largest oil producer in the world by 2017, at least according to Fatih Birol, chief economist at the Paris-based International Energy Association.

Yet as professor Steve Yetiv, one of the America’s foremost oil analysts warns, this recent American oil boom is not the game changer some would have you believe. American national security still depends in large part upon the global energy market, one with inescapable ties to the Middle East.

In this light, Myths of the Oil Boom assumes a much welcomed long-term energy security focus. Yetiv acknowledges the benefits (as well as costs, i.e. groundwater contamination from fracking) of the recent American oil boom but forcefully contends this is not enough to inoculate us from the vagaries of foreign oil. Deep down, in their heart of hearts, even the most passionate advocates of the “drill, baby, drill” mantra know this, too. Truly long-term solutions to oil and accompanying insecurity rest in moving away from this precious commodity, not simply finding more of it domestically.

What we need then is a dramatic “moonshot program” to wean Americans off our addiction to petroleum. Yetiv’s “synergistic strategy” doesn’t discount the benefits of increased production at home, a boom it bears noting rests squarely with hydraulic and horizontal drilling, which now account for as much as 55% of overall U.S. production and just about all of the recent growth; however, the author does pointedly state that this flush of supply could easily backfire if not tempered with a more sustainable, long-term perspective. Indeed, he argues the current American oil boom is the perfect opportunity to facilitate decreased consumption of oil.

Yetiv tackles oil security comprehensively, then, deftly weaves primers on oil markets with broader theoretical discussion on the geopolitics of oil. Richly sourced but written for a general audience, the analysis highlights “oil [as] one of the defining features of our age.” With a virtual monopoly on the transportation sector, oil affects our daily lives from the “local gasoline pump to faraway wars,” and perhaps most importantly of all, along with its other fossil fuel brethren, fundamentally drives the ominous threat of climate change.

After an enticing introduction that fleshes out the nexus between oil and security, each subsequent chapter addresses a reported myth of the oil boom. The argument spreads out over three sections, separated effectively into oil prices, geopolitics, and the costs of using oil, along with a fourth section exploring energy solutions.

Section one’s three chapters target oil markets, showing how long-term prices will not be substantially lowered, how the Saudis are abandoning their long established position as a price dove, and how U.S. presidents very minimally influenced gas prices, respectively.

The three chapters in section two highlight the geopolitics of oil, noting more American oil does not mean less Persian Gulf intervention, fundamental limitations to using oil as a weapon, and that US consumption is crucial at roughly one quarter of the world’s 89 million barrel a day habit.

Despite the heft of this early subject matter, though, it is perhaps the third section that will attract the most attention. Chapter 8, in particular, asserts the costs of gas are much greater than what Americans pay on average at the pump. Only 65% comes from the cost of oil, with refining (14%), taxes (13%), distribution and marketing (8%) covering the rest, although these percentages still fail to include much higher hidden costs to our oil addiction.

These externalized costs range from building and maintaining the infrastructure for our transportation network, to the military expenditures needed to maintain access to this resource in unstable parts of the world (not to mention the enemies this presence creates, i.e. terrorism), to the pollution that results from its use, including climate change.

Before explaining how peak oil concerns will continue throughout the 21st century in the last chapter of this section, Yetiv takes on another misunderstood development in the latter 20th century, how national oil companies have replaced the Seven Sisters like Royal Dutch Shell as the most dominant actors on the oil stage today.

Discussion on globalization takes an interesting turn here as Yetiv notes how most scholars associate it with a loss of state power whereas, within the oil arena, oil producing states have actually enhanced their power via nationalization. It’s a valuable point, but if given more time and space Yetiv would surely have noted it’s a bit more complex than this. Oil producers indeed have more power, but as Yetiv himself notes, they are constrained in how they use it. The much feared oil crisis of 1973–1974 is highly unlikely in today’s not only globalized but also interdependent world.

The reason for this rests in the international relations concept of interdependence that scholars Robert Keohane and Joseph Nye first espoused in the 1970s. Arab OPEC states don’t want to bite the hand that feeds them. They are dependent on oil consumers just like oil consumers are dependent upon them. The arrow goes both ways. After using oil as a weapon in 1973–1974, they not only quadrupled oil prices but also sent the American economy into recession. As well, their actions made goods their citizens imported more expensive and spurred conservation as well as alternative energy investment in the West.

Yet, as Yetiv writes, the recent American oil boom shows how much we have yet to learn from past experiences such as these. Our misplaced obsession with dependence on foreign oil, instead of merely oil, ignores the larger issue of dependence and addiction. The challenge we face is about being proactive instead of reactive, not only to events in the Middle East but here at home.

That is not going to be easy. “Transitioning away from the oil era will be a slow and arduous process because oil has created an entire infrastructure and way of life built around its discovery, production and use.”

In Yetiv’s words, we “must re-order the cobweb of connections” by adopting three sets of approaches: government directed efforts (such as promoting electronic vehicles), market-oriented strategies (ramping up the federal gas tax beyond its current 18.4 cents per gallon, incidentally a number it’s held since 1993), and international policies that encourage Washington and Beijing to not just compete but also learn from one other.

Ultimately and ironically, while success depends in great part on our leverage as an oil-consuming nation, drilling more only foolishly feeds this addiction. The first logical step, then, is to consume less.

Mike Gunter Jr. is author of the acclaimed book Building the Next Arc: How NGOs Work to Protect Biodiversity. He is Professor at Rollins College. Dr. Gunter's teaching and research, as well as numerous articles, focus on the politics of the environment and sustainable development.