In My Shoes: A Memoir 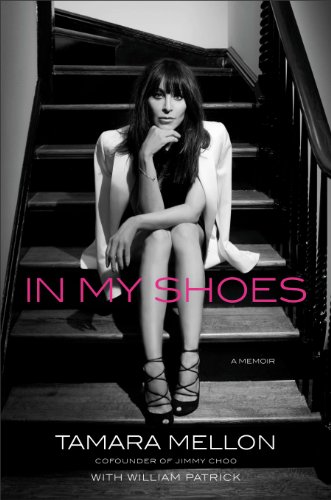 You do not have to be a fashionista to recognize the name of Jimmy Choo, the company that put the bling into footwear. The name behind the brand is, however, undoubtedly Tamara Mellon and not the Asian cobbler to the well heeled (excuse pun) whom she disastrously partnered with to form the company that would become a billion dollar brand.

Tamara Yeardye, as she was known before her marriage into the well-known wealthy American family, was born to wealthy British parents. Her father was an astute businessman, her mother a former model who had “severe emotional problems exacerbated by alcoholism.” The horrifying mother-daughter relationship Ms. Mellon describes is perhaps the most revealing and distressing aspect of this autobiography.

The book begins with Ms. Mellon working for Vogue magazine while she was “a functioning addict.” At this time, home was the “rather dodgy” basement of her parents’ Belgravia property. One of the best areas of London, a quick look on London realtors’ websites indicates these “dodgy” homes are available from around a million bucks!

In any event, it was well located for Ms. Mellon to indulge her passion for all night clubbing with her two best friends—cocaine and vodka—supplemented by a long list of well-heeled pals including one described as “goddaughter to Prince Charles.”

Her boyfriend at this time, Cedric, came from a “lower aristocratic family and lived just around the corner—also in the basement of his parents’ home. It really was quite the fashion.” Cedric apparently had “an edge to him”—possibly because he was educated in Switzerland rather than in the usual hangouts like Eton or Harrow.

Determined to cut her own path through life and escape her parents’ basement—and her mother—Ms. Mellon went through rehab to rid herself of her addictions then used her fashion knowhow, her creative flair, and her father’s money to establish the company that was to put more feet on the world’s red carpets than even Sex and the City’s Carrie Bradshaw could have imagined.

Publicity materials for the book tout Ms. Mellon’s credentials as a trade envoy for the British prime minister and of the honor of an OBE bestowed by the queen. It shouts about the battle between the colliding worlds of “creative” and “financial,” her battles with her demons, and ultimately Ms. Mellon’s “triumph against a brutally hostile takeover attempt.”

But overall, In My Shoes falls badly between the various audiences it targets. The fashion groupies will be bored senseless by the endless detail of financial and boardroom traumas, while aspiring entrepreneurs will retch at the constant name-dropping by this poor little rich girl.