My Pizza: The Easy No-Knead Way to Make Spectacular Pizza at Home 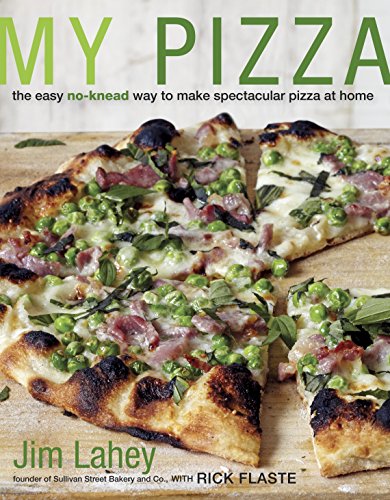 “Because the pizza dough recipe and technique are now widely available online, cooks will appreciate the more unusual toppings and sides that make My Pizza: The Easy No-Knead Way to Make Spectacular Pizza at Home worth buying.”

Since Jim Lahey’s no-knead bread recipe hit the New York Times in 2006, everybody and their mom has became a bread baker . . . even if Mom never taught them anything about being in the kitchen. Because so many Americans have lost their way in the kitchen, the no-knead technique seems astounding—just stir a few ingredients, let the dough rise for a long time, plunk it in a pot, and bake it!

And for European-style round loaves, this wet-dough method does produce a flavorful loaf with a crisp crust and pleasantly holey interior. But it’s a one-trick dough; and while it’s great to keep some in the fridge for everyday loaves, once the breadbaking bug bites, bakers will still want to try out kneaded, drier doughs that allow more options in shaping and flavor.

The trick does work for pizza crusts, though, and with his second book, My Pizza, Chef Lahey, owner of the New York pizza restaurant Co., explains his broiler method for creating a thin-crusted pie in a home oven.

By heating the oven, then running the broiler for 10 minutes before sliding the pizza onto a now-superheated stone, bakers can approximate the crisp underside and charred top of a restaurant pie. Pizzas cooked this way require a close eye to guard against burning, but the method works well.

And how does the dough work? Sometimes, just fine—but others, thoroughly frustrating. When it comes to instructions on shaping the dough, Mr. Lahey is a bit of a minimalist. He describes how to divide the dough into four portions and shape them into smooth balls, but doesn’t suggest letting them rest a bit after that, which could help the dough relax.

(Interestingly, Chef Lahey does call for an hour-long rest in the version of his recipe he publishes in Bon Appetit magazine—a recipe that doubles the ingredients from the book, but divides the dough into bigger portions, then calls for them to be formed into the same size pizzas as those from the smaller dough balls in the book. Why the discrepancies?)

Chef Lahey offers two methods for stretching the dough, one on a work surface and the other over your knuckles (no mention of spinning it, airborne, though the chapter opens with a photo of him doing just that). He emphasizes being gentle, allowing gas bubbles to stay inflated—so no rolling pin on this dough. But stretching the dough, using either method—and especially without a rest after shaping the balls—can lead to multiple rips and holes.

Mr. Lahey makes no mention of this possibility, much less what to do. Pinch it back together? Patch it with other dough? Set it aside to rest, because as soon as you patch one hole, another will likely appear? His relaxed attitude here needs a little balance—yes, tell cooks that it doesn’t matter whether they use bread flour or all-purpose, but no, don’t emphasize handling the dough gently and then fail to address the inevitable issues that follow.

But once cooks get a reasonably shaped, thin crust onto a pizza peel, they’ll find a variety of useful, interesting toppings. A simple, fresh tomato sauce can stand on its own, or take fresh mozzarella for a classic pizza. The author turns to arugula and corn for one pizza, zucchini, capers, and anchovies for another, and radicchio, olives, and caramelized onions for another. His pepperoni pie plays a little trick, because pepperoni here just means pureed red peppers, a base for homemade lamb sausage.

Other toppings sit on a creamy white (béchamel) sauce, made with a quick, flour-milk slurry. Toppings include a combination of bacon and caramelized onions; prosciutto and peas; sauerkraut, mustard, and German sausages; roasted cauliflower; and potato, leek, and Gruyere.

Another chapter offers pizzas with no sauce, including Mr. Lahey’s “popeye pie” with fresh spinach, artichoke with walnut puree, and squash with pumpkin seeds.

With that, the pizza recipes end, but the book continues, with chapters on “toasts, soups, and salads,” and desserts. Chef Lahey suggests serving slices of toasted Italian bread topped with chicken liver puree, spiced cannellini beans, or broccoli rabe and homemade ricotta while waiting for pizzas to cook. He offers a gazpacho recipe made smoky by a roasted poblano pepper and bonito flakes, and salads including one with baby octopus.

Six dessert recipes include a basic gelato and variations, some gelato sundaes, an olive oil cake flavored with black olives and orange zest, and chocolate chip cookies baked fast at 500 degrees, to come out crisp-edged and soft inside. That interesting technique produces fairly ordinary cookies, but the recipe is quick, though it does require a close watch to guard against burning.

Those final chapters seem superfluous (and unexpected) in a work marketed solely as a pizza book, but they provide Co. fans with some recipes for their favorites in the restaurant. Because the pizza dough recipe and technique are now widely available online, cooks will appreciate the more unusual toppings and sides that make My Pizza: The Easy No-Knead Way to Make Spectacular Pizza at Home worth buying.