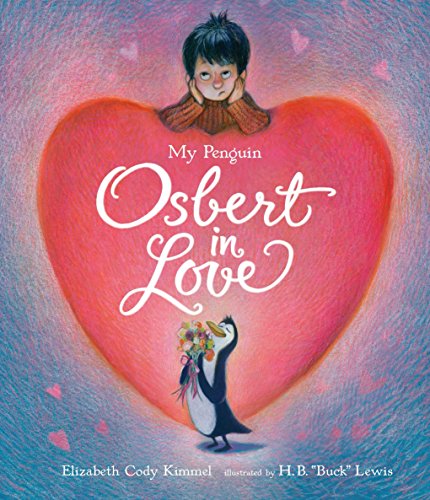 My Penguin Osbert In Love features the return of Osbert. After leaving the safety of the zoo, along with 22 penguin friends, Osbert goes over to Joe’s house to ask him to take him to the South Pole. You see, Osbert has received an invitation to come to a “Once-in-a-Century South Pole Extravaganza” to see the southern lights. Osbert and his friends really don’t want to miss this rare event, but there is a problem—penguins don’t fly—so Osbert thinks that Joe could take him.

Joe, however, is expected to be at the Midwinter Bash his mother is throwing that day but, thinking that the South Pole is a straight shot, decides to take the real helicopter that Santa gave him this Christmas to take the tuxedo wearing bunch to their event. The story then deviates with some stops here and there, including bathroom breaks and a stop with a T-shirt-selling girl, before actually reaching the South Pole.

Once there Joe and the penguins see the southern lights, which are better than watching fireworks on the 4th of July. But that isn’t all that Osbert is staring at. He is captivated by Aurora Australis, a female penguin. From that point on Osbert is in love. The two penguins spend some time together until Joe has to return home. Twenty-three penguins returned with Joe, including Aurora, but does Joe make it to the Midwinter Bash on time?

This is a very cute story. The artwork with the colorful pastels really brings out each detail of the characters and the landscape, making it feel believable. The story was filled with humor and some fanciful exaggeration.

Osbert and Aurora’s encounter was brief and near the end of the story; it could have been further developed. Though children will be left with curiosity about what might happen with Aurora and Osbert, they will also enjoy the illustrations and humor. Children ages 4–8, who loved the first picture book, will be excited to read this 48-page sequel.