My Name Will Grow Wide Like a Tree: Selected Poems 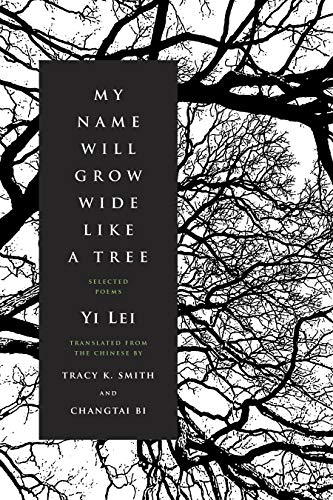 “The raw sensuality, the winsome yen of her language and its ‘small gifts laden with love’s intentions’ leaves no doubt to the reader about the anonymous others she carries through the work, carries through herself . . .”

“I wish you to know that I am a river,” wrote painter and naturalist Alexander von Humbolt in 1848.  “I have not many tributaries, nor much timber, but I am full of fish.”

Yi Lei, a century and a half later, faces a similar but more conscious reality:  She is fully aware of —but untroubled by— the waters rushing inside her and their contents. She knows well and can name all the fish within her while admitting, unlike Humboldt, her many tributaries.

Yi Lei died in 2018, but in My Name Will Grow Wide Like a Tree: Selected Poems Yi Lei, assisted by the thoughtful, expansive translation efforts of Changtai Bi and former U.S. Poet Laureate Tracy K. Smith, offers in her absence what is, quite simply, one of the finest collections of poetry released in the last five years.

When Yi Lei released in 1986 her poem “A Single Woman’s Bedroom,” it became a lantern for Chinese literature, as much a manifesto as poem. At the time, cohabitation between unmarried couples was illegal, and the epistrophe of every section of the sprawling poem, regardless of its unrelated topic, carries the same wanton call: “You didn’t come to live with me,” delivered the way that a person, hearing they have cancer, understands that all their problems have become but one. The raw sensuality, the winsome yen of her language and its “small gifts laden with love’s intentions” leaves no doubt to the reader about the anonymous others she carries through the work, carries through herself, the same that Whitman yearned for so long ago, declaring “I am not to speak to you, I am to think of you when I sit alone or wake at night alone.” Yi Lei stands alone, before us, holding a sign: Wherever you are, whoever you are, you are here.

But the work is, at its heart, not the story of who isn’t there, but who is, and that is Yi Lei, standing tall, herself, trembling but unafraid, making of her very flesh a great revolution.  “I read materialist philosophy,” she opens one stanza, staring unblinking at the cruel world around her, reminding the reader and perhaps herself that revolutions need not be incendiary. Common ones come often enough, and here Yi announces, immodestly and containing multitudes, that her very existence is a form of protest.

Any translated work is as much that of the transcriber as it is of the original author; to America, Robert Pinsky, laureate of Boston, is the voice of Dante Alighieri, poet of Florence, the two improbably ever married together after for centuries for centuries to come.  Elena Ferrante sounds conspicuously like Ann Goldstein, and here Yi Lei has the unmistakable timbre of Tracy K. Smith, one of the finest artisans of her mother tongue the nation has ever produced.  One suspects that Yi Lei and Tracy Smith are both even better for it.

Still, all translation is a challenge, especially with languages and cultures as diverse and unbridged as that between the United States and China. Translators must also be diplomats. Their hearts and hands stand for nations writing treaties, trying to come to an agreement where their languages never can, forging laws out of concepts that are not and may never be mutually interchangeable. Smith confesses in her foreword that, with Yi Lei’s permission, she has often stepped away from the original text for the sake of conveying the sentiment of the poet, rather than her every syllable.

Smith owns, and embraces, these loving digressions: sometimes the best way to love something is to hold it in your sweet imagination, and she gifts into the work the wealth of her own experience: she knows what it means to be celebrated in one’s time; she knows what it means to feel the earthly aches; she knows too well the pains of many forms of hunger. In My Name Grows Wide Like a Tree Smith creates a smooth, seamless, and beautiful text that feels almost conversational, both with Yi Lei and with her many tributaries, called to service by both author and translator.

It is easy to spot the poets in Yi Lei’s home. Russell Edson lurks at the doorway, and Leigh Hunt drops in to visit, but it is Uncle Walt who bounds in, stretches out, and takes up residence.

In fact, here Yi Lei wields the language, the sentiment, the carriage of Whitman deftly, in sometimes rambling Song of Songs romantic elegies that, like the ancient book of Solomon, almost demand to be read aloud as sabbath prayer. In fact, Whitman’s voice is so present here that it leads one to wonder if Walt wasn’t Chinese all this time or if, more probably, Yi Lei is just herself of everywhere and everyone.

Nevertheless, Tracy Smith escorts both of them along through long poems lavishly rendered into the self-conflicted, unsatisfied, but utterly gorgeous prose that mirrors its author. Smith tells Yi Lei’s story with lush, tidal language, spilling the banks of English like the Yangtze, full of fish, over its earthen bounds.

Li Yei, until now largely unknown to English audiences, did not live to see the completion of this book’s translation. In its release, two years later, it becomes her first major collection of poems translated into English. It is superb. May her name, as the title declares, grow wide like a tree.