My Mother Was Nuts 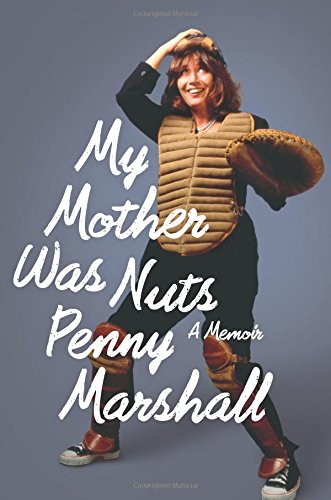 To start with a softball of a metaphor (apt because perhaps the high point of her career to date is the 1992 film A League of Their Own), when it comes to getting her points across in her new memoir My Mother Was Nuts, actress/director/author Penny Marshall is pitching underhand.

When it comes to telling the story of her life, she prefers comedy to candor.

She tilts her head and smiles her toothy grin.

As here, in the manner in which she begins:

“I’m not someone who’s had to deal with much personal drama outside the usual: growing up with parents who hated each other, two marriages and divorces, the ups and downs of various relationships, raising a daughter, and watching friends crack up and overdose. There was the cancer thing, too. As you can see, though, there’s nothing out of the ordinary, nothing that most people don’t go through, nothing that says, ‘Penny, you were lucky to get through that one.’”

This perhaps underrates the time that her skull had to be drilled open so that she could have that operation on her brain tumor. Or the fact that, against the odds, she has had one of the most successful careers in the entertainment industry, with nine years on "Laverne & Shirley," and a string of successful films she directed, including The Preacher’s Wife and Big.

Or for that matter the fact that she carried the last season of her television show herself when her costar walked off for the sake of marriage and children, leaving her to pretty much play Laverne and Shirley.

She certainly underplays the impact that the sudden, shocking death of her close friend John Belushi had on her—a tragedy that fills an entire chapter of this volume. To say nothing of the depression she faced after the end of her marriage to actor/filmmaker Rob Reiner. Or the value of her many friendships with the great and near-great of Hollywood.

But again, our author would prefer not to belabor the point, the point being that she is now what she has always been: a kid from the Bronx, now nearly in her seventh decade, who can close her memoir by stating:

“The only thing that has changed about me is that I don’t worry as much about getting asked to dances.”

And quite possibly mean it.

But jump back for a moment to the opening beat. Because here, right smack at the beginning of this book that is largely a smorgasbord of anecdotes, she starts off with a doozy only syllables after assuring us that nothing much has happened in her life that is not above and beyond the norm:

“Oh, except for when I was robbed by the knife-wielding ninjas.”

And then she tells the tale, as she has undoubtedly told it across a thousand dinner tables in a thousand rooms overlooking panoramic views of city lights below of how two men, dressed in full ninja drag, broke into her Hollywood home one evening, thinking the place empty. Of how she, with a facial mask drying and tightening on her face, confronted them. Of how, when the mask began to flake, she said:

“’I’m going to wash this mask off my face.’ I didn’t ask. I told him. Then, without waiting for an answer, I went into the bathroom, scrubbed my face, and returned. My robber was surprised when he saw my face.

“He didn’t move. Neither did I. We stared at each other, unsure what to say next. It was like being in a bad improv class.

“’Is this going to be your career?’ I asked.

But the woman knows how to start things off with a bang. And with a comic’s sense of timing and follow-through, she keeps the stories coming, most notably in the first section of the book, in which she sets out to colorfully explain her title, My Mother Was Nuts, and without a shadow of a doubt.

Indeed, the tales of her relationship with her mother—a woman who, when Penny Marshall was about to give birth to her first and only child, insisted to traveling from New York to New Mexico to help her daughter, only to bark, when asked how long after her water broke her daughter had to get to the hospital, “What do I look like, a doctor?”—are by far the best of the anecdotes, leading the reader to suspect that had she actually written a book that more fully matches that title, that truly and completely focused on her mother and their troubled, complex relationship, Ms. Marshall would have a better book on her hands.

No one else, not even the author herself, emerges from these pages a vibrantly as does Marjorie Marshall. I mean, who else would place so much importance on their apartment’s linen closet?

“That’s where my mother kept her ‘suicide jar’—a collection of pills. If any of us got a prescription for whatever reason, a few pills went into her jar. They were her safety, her Plan B. She swore she would swallow every damn on of them before she would let herself become a burden.

Easily the best chapter of the book is Strictly Ballroom, in which the author writes of the Marjorie Marshall Dance School:

“My mother’s ballroom was located in the cellar between the incinerator and the storage room for bikes and sleds. There were pipes on the ceiling, and the bulbs that lit the room were plain. Every year we painted the walls turquoise. It was nothing fancy, but for those who took lessons at the Marjorie Marshall Dance School, it was a special place.

“You heard music before you arrived. Then, once inside, you saw my mother at the upright piano, dressed in black slacks and a pale blouse, with a Yoo-Hoo and her cigarettes sitting on top of the piano.”

From there the memories come fast and thick.

Of her mother’s passion for her ballroom and her dance school. Of her mother’s demands of perfection from her students; demands that took them first to television’s “The Horn and Hardart Children’s Hour,” and then onto “Star Time” with Connie Francis, and finally to “The Jackie Gleason Show,” where the girls appeared as “junior June Taylor Dancers.” This stood Penny Marshall in good stead when she later made her living on television.

The memories include their mother following her famous children to Hollywood, her unhappy husband and blind mother in tow. And sadly, her long struggle with dementia.

But once the book switches focus from Marjorie to Penny, it loses vibrancy, becoming a more or less linear retelling of her Hollywood success story. One that is funny enough. And one that, shyly reminds us both of her great success and of the simple fact that, were justice served, Ms. Marshall would rightly replace Kevin Bacon when any of us plays Six Degrees of Separation. The woman, it seems, knows everyone. And has their phone number.

And forget that Ms. Marshall is the sister of writer/actor/producer/television legend Garry Marshall. And that she was once the daughter-in-law of comic genius Carl Reiner. And that her best friend is actress/author/Princess Leia Carrie Fisher.

She is the daughter of Marjorie Marshall.

That is her most important attribute.