My Lunches with Orson: Conversations Between Henry Jaglom and Orson Welles 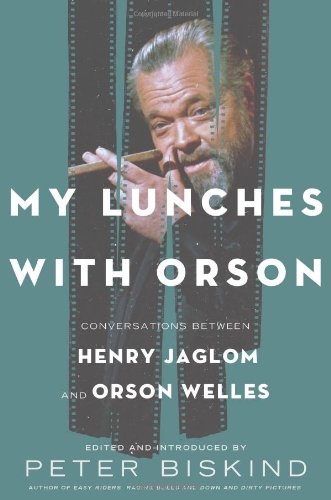 “The book is a must-read for anyone who loves the movies, the golden age of Hollywood, or conversations among seriously bitchy men.”

There are three sexes—men, women, and actors—the great director Orson Welles told director Henry Jaglom 30 years ago. Jaglom has just released the edited transcripts of two years’ worth of lunches from the mid-1980s with the outrageous Mr. Welles in a new book, My Lunches With Orson: Conversations Between Henry Jaglom and Orson Welles.

At an absurdly young age, Welles directed what many still believe is the greatest motion picture ever made, Citizen Kane. He also made The Magnificent Ambersons, The War of the Worlds radio broadcast that spooked America with its feigned invasion from Mars, and a lot of other movies, most of which are either forgettable or forgotten.

Welles himself enjoyed a career in Hollywood that lasted half a century, and he knew everyone from Charlie Chaplain to Walter Winchell, Lena Horne to Richard Burton. The book shares Welles’s scathing, hilarious, and sometimes hard-to-believe opinions and anecdotes about pretty much every big name in Hollywood.

The book has no index; if it did, it would double the length of the book.

The book is a must-read for anyone who loves the movies, the golden age of Hollywood, or conversations among seriously bitchy men.

Jaglom kept a recording device in his bag, with Welles’s awareness, and although they never discussed it, Welles must have known it was on. Their deal: Jaglom would release no excerpts before Welles passed away, a promise he honored for almost three additional decades.

It’s delightful to watch Welles take on the gods of Hollywood. Charlie Chaplin comes in for a complete skewering. Welles considered him effeminate, self-obsessed, and so egotistical that he actually fired one of his gag writers because the unfortunate chap had the bad judgment to tell Chaplin that he had written a new gag—when H. G. Wells happened to be visiting the set.

Humphrey Bogart fared no better. Welles considered him a second-rate actor, a guy who would provoke fights in nightclubs, secure in the knowledge that the waiters would restrain him and his opponent before any real punches could be thrown.

Sir Lawrence Olivier, the great Shakespearean actor, is also a frequent target in the book. Welles calls him, in many different ways, a narcissist and a destroyer of his fellow actors’ morale, whose reading of Hamlet’s going to war speech sounded as though it was being dictated by a businessman to a secretary.

But the greatest vitriol was reserved for one-time Mercury Theatre partner John Housman. Housman and Welles locked horns over credit for the play The Cradle Will Rock in the 1930s when the U.S. government shut down the Federal Theatre. After that, it was war with various biographers and essayists, including even Jean-Paul Sartre, taking sides.

Welles did like some people, Franklin D. Roosevelt among them. Welles speaks about spending time with FDR at the White House and quoting the president to the effect that he and Welles were the two best actors in the entire nation.

One of the most outrageous stories in the book details Welles’s romantic involvement with the great African American songstress Lena Horne. He took her to lunch at the 21 Club in New York, something that simply wasn’t done back then. When the proprietor asked him not to return with her, Welles cooked up an elaborate prank involving a Chicago prostitute who was flown to Los Angeles for the occasion, which ended in the arrest and humiliation of the restaurateur. Welles was delighted.

One more snarky story: Another Welles enemy was so annoying to the hotel staff at the Algonquin that a waiter regularly urinated into his tea. The tea-drinker didn’t notice, so the ratio of tea to urine shifted until the beverage was almost entirely urine. The capper was that he went to another restaurant for tea and then complained that it wasn’t as good as what he was served at the Algonquin.

Another arresting feature of the book consists of the random stars who wandered by Welles’s table at Ma Maison, a legendary Hollywood eatery so snobbish that it didn’t even have a listed phone number—its original chef was Wolfgang Puck whom Welles detested (of course).

Those who stop by for brief cameos include Richard Burton, Jack Lemmon, super-agent Irving “Swifty” Lazar, and Zsa Zsa Gabor, whom Welles threatened with his dog.

At one of the last lunches, Welles tells Jaglom that he doesn’t want a legacy because, he said, “I regard posterity as vulgar as success.” Welles passed away of a heart attack within a day or two of that remark. Fortunately for us, and thanks to Jaglom, Welles has indeed left a legacy, and now this fascinating and highly entertaining narrative has become an important part of it.